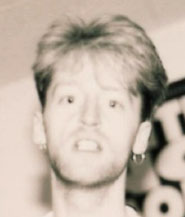 Paul Hammond splurged onto the scene in 1991 as Paul Scouse-Git fronting Rhyl punk no-hopers Psycho Sexual Sex Terrestrials. After a couple of singles and some Radio One airplay, he formed GMX Stuns. Since then, Paul has kept himself busy using the PSST moniker to release several albums, he also promoted gigs in Rhyl, spearheaded the Smash Apathy campaign in 1994, and also remixes and releases music under his own name. Having presented a very sweary show on Coast FM in the 90s, he rekindled the art of broadcasting and now hosts the weekly Punk As Fuck podcast.

Where I’d like to be right now: Somewhere warm

My music collection has a lot of… Punk vinyl

Don’t judge me for… Anything. I am who I Am

Five albums that keep me alive and why:
Sex Pistols – Never Mind The Bollocks – the greatest record ever made!

Buzzcocks – Love Bites – Played it to death when it came out, still play it now. Great album.

The Clash – Give ’em Enough Rope – I actually prefer this to the debut album purely because I heard it first. Safe European Home & Tommy Gun are my fave Clash tracks.