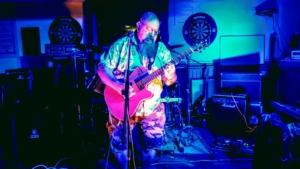 James Phillips as you probably know is a musician / promoter from Bangor. He recently released an album ‘Bones’ on vinyl and CD on link2wales records and is currently collaborating on a new album with several contributing artistes. As well as his solo work, James has played in numerous bands over the years, including Burnham Burnham, Made Made Noise, Bum Sting Spiders, Mudshark Incident and Velvet to name a few. Apocalypses, pandemics and Four Horsemen appearances permitting, James hosts open mic nights in Bangor and promotes gigs in the city.

Best known for: Running music. I think music in The Skerries is probably what I’m most known for overall. Perhaps locally I’m better known for having coloured hair, tattoos and a mobility scooter? Who knows what people think?

Where I’d like to be right now: I’m in Bangor and I love being in Bangor. I know it’s fashionable to run places down, and yes there are empty shops and charity shops everywhere, but it’s my home and I love it dearly.

My music collection has a lot of… NWOBHM records.

Don’t judge me for… My stagewear. I’m most a fat man in a dress onstage these days. It may not be beautiful, but I think it might be memorable and it’s extremely comfortable. So there’s no need to judge me for it. Hey, try it, you might like it!

They all hit me right in the heart and refuse to let go. Those five albums are the ones that came to mind immediately, but there are others I could have named. I tend to find that some albums just stick with me from the first time I heard them. All five of the ones I’ve listed did that to me. The other thing about those five is that there is no filler on any of them. The CD ushered in an era of longer albums that you can’t fit on vinyl. Most of them suffer for that extra length with songs that shouldn’t have made the final cut.