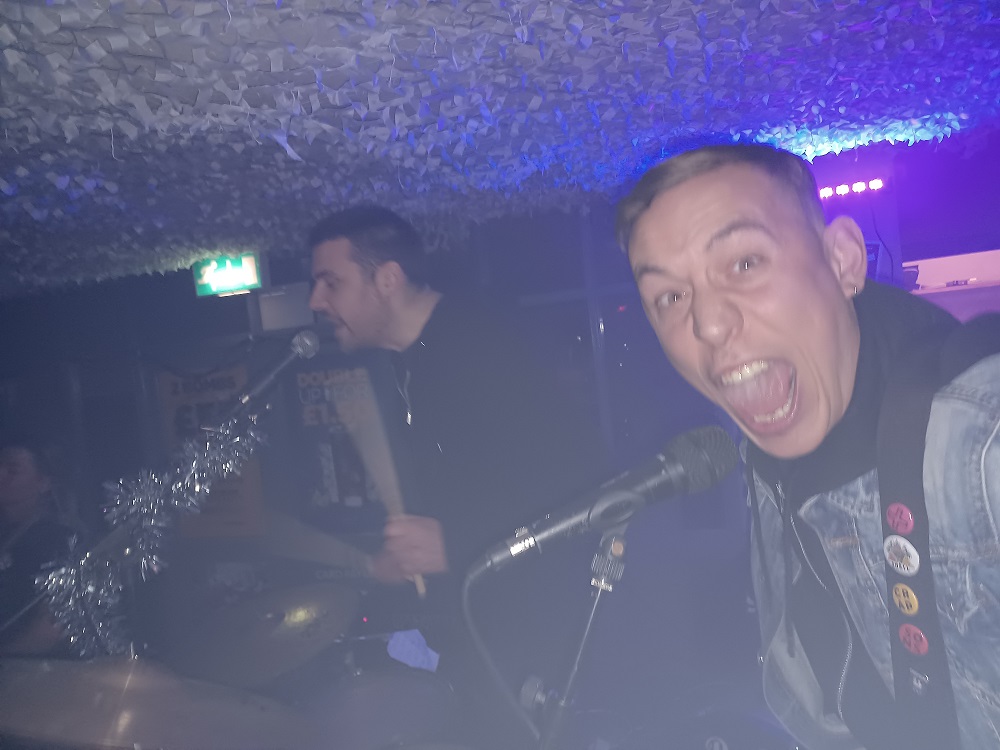 The last time two members of Parker played over here it was a few days before we went into national lockdown. They were called Gas Hands then, but now, with a new bassist, the band from Derry are on a UK tour, and fair play to them. Perhaps they are soothsayers, as by the time you read this martial law will probably have been reinstated (in Wales anyway). (‘Lock your doors, close your minds, only the elite may gather in numbers, you scum can die alone’). 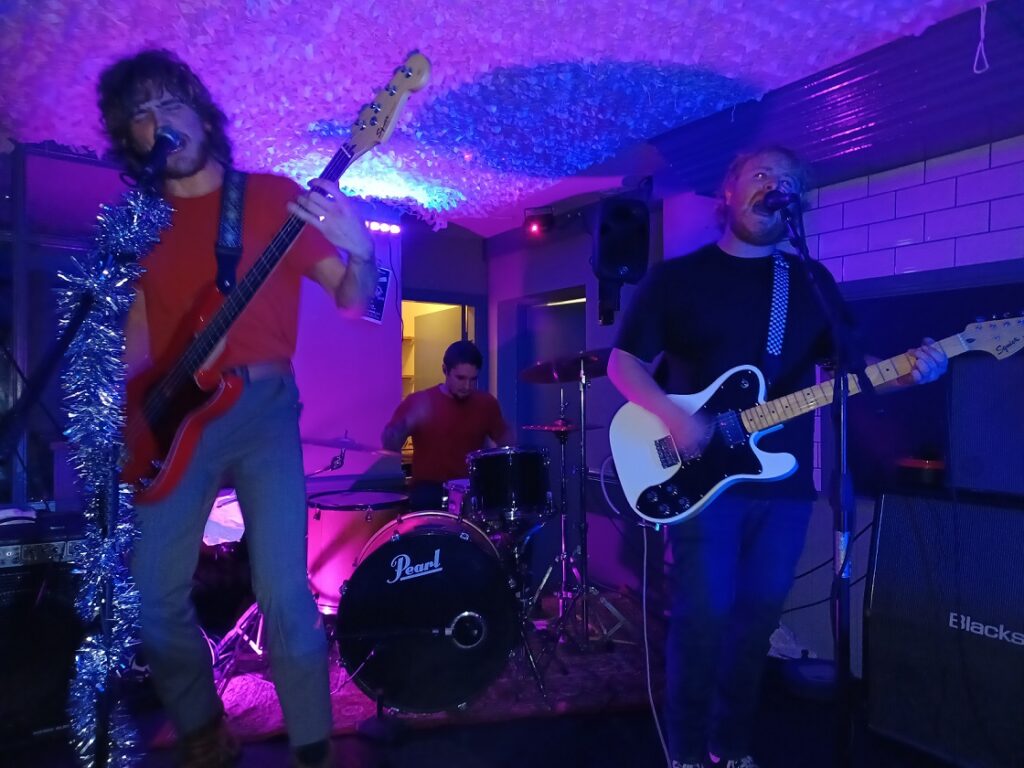 Parker played in Rhyl earlier in the week with White Ether – it was a cosy gig and very entertaining the latter demolished the drum kit.
Times are strange; Crapmess, like the Birkenhead Punx Xmas Bash the night before would normally have been a sell out… The Chameleons played to a half full / empty Ritz, Steve Harley & The Cockney Rebel had a sparse crowd in Bath, Premier League stadia were not at their usual capacity… People are locking themselves down.

Two bands pulled out tonight, and both Crapsons and Spam Javelin lost members due to coronafear or being pinged.
Still… It was one helluva night.

Parker were added to the bill this morning to fill the void left by the absent Oorya and Tits Up. They were en route back to Northern Ireland and played to the other bands and a wash out seemed to be on the cards. If you’re familiar with guitarist-vocalist Dylan’s previous guise of Lost Avenue and then Gas Hands, then you’ll get the gist. They played that tight punk rock with a song and prayer and were gone to catch the ferry to nowhere.

It was a bit ominous that what should be a celebration looked like being a wake as Crapsons (main pic) went on to an empty room… Five of us thought ‘fuck this’ and headed down to the front and made a riotous party of it. Within four songs the cavalry arrived and the numbers looked far healthier and a great time was had by all. Crapsons, stripped back to their two-piece line-up, played the best I’ve seen them. The new songs are bish-bosh and to the point, the sound was ace and the performance was a true smash n grab. 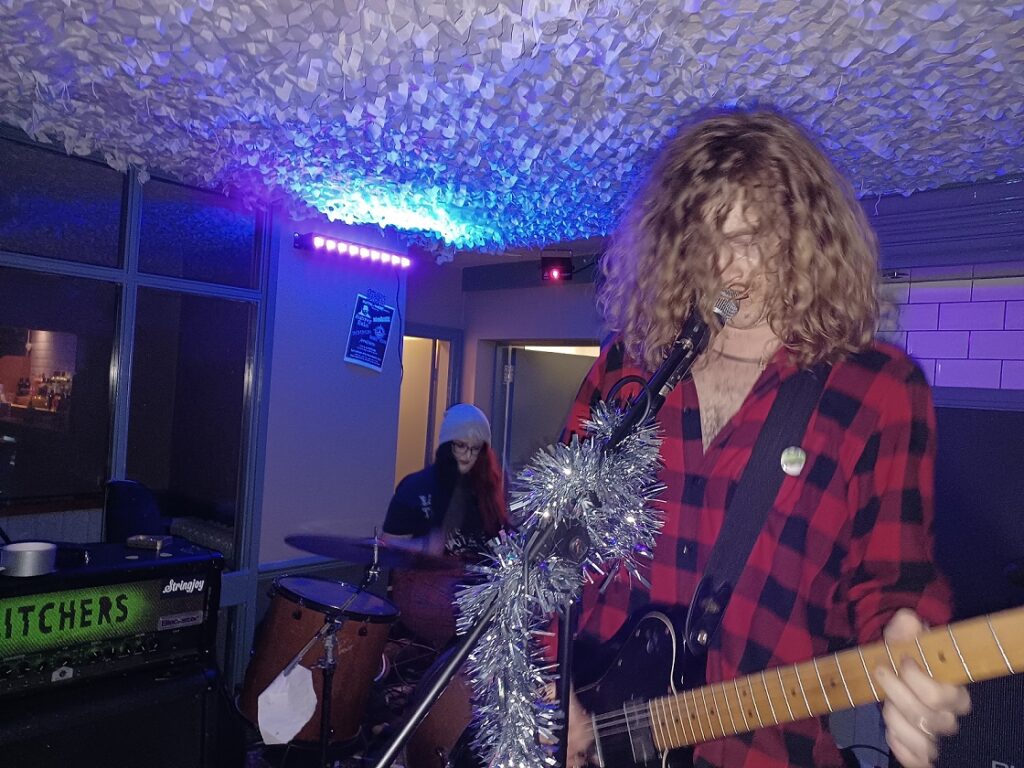 Talking of smashing and grabbing, Glitchers literally did that. Another two-piece, they have been tearing up and down the country all year, accumulating gig points to the tune of more than 160. Most performances are outdoor, ripping the UK’s high streets new arseholes as the police and security wonder what to do with them. Tonight, in the ‘safe’ environment of Colwyn Bay and among new found friends, Glitchers tore the place apart. Reminiscent of Rhyl’s Carpet in their delivery, with the songs being all-out full-on balls-to-the-wall punk rock. It was a beautiful life affirming experience.

We (Spam Javelin) felt the Groundhog had bitten us again as our Strictly Come Covid drummer got pinged by Giovanni to say he needed to stay indoors. Two years previous we did a spate of drummerless gigs, borrowing stickmen from other bands. With two hours’ notice tonight, this was going to be difficult, so instead , we two-stepped our way out of it by using the isolated [sic] drum tracks from the last album and a couple of Crapsons for an anarchic finale. It was rough, it wasn’t ready, it was a bit of a riot! It was a great laugh and the venue had to close for 15 minutes to clean up before the nightclub opened. Sorry. (here’s a video)

See you on the other side… Again…