Treading where even crying angels fear to tread, this three band package rode into town. Armed with guitars rather than guns, they came, we saw and some got wankered. These are strange times we live in… It was hard enough to get people out before all this shit happened… Of course, the plebs will pay £40 to watch a tribute band in a theatre up the road, but they’re hard pushed to part with £3 and not watch I’m A Celibate Get Your Sperm Out Of Here on Trash TV to go out and watch real music made by real people. Of course when all the venues close their doors, they won’t notice because, how can you die when you’re already dead?

Famous Rock Family Tree archivist Pete Frame would’ve enjoyed working out this one. 3x three piece bands on the package with a total of six people on stage at different times. The three bands strayed into Rhyl from Robin Hood territory slung on their guitars and had fun.

With little to prove, Parallel States were making a racket sound-checking as we walked in. There were several novice engineers stooped over the desk, hoping not to press the self-destruct button. Nowt to worry about arr kid, the sound was boss (as it always is at this new venue). Parallel States made a glorious racket and had fun in the process. That Green Day kind of genre (with Billie Joe voice to boot) is not my thing at all, but I can appreciate a band who enjoy what they do and know how to put on a show. Enjoyed the ska-tinged Armchair Anarchist. 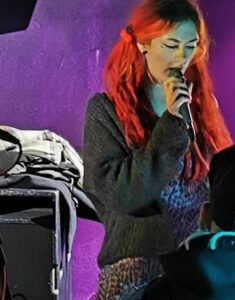 Bassist, Sam Kiely swapped his instrument for a guitar and then swapped his band for Alice’s Ants. His guitar was split to play bass too, allowing vocalist Emily to concentrate on being nonchalant and compelling in a Mark E Smith way (without the nastiness). Really enjoyed their set; that dilapidated garage fuzzed up feel. Online research betrays an additional member, whether his absence is permanent or temporary, I don’t know, but this didn’t detract from a great set. Check out their only song out there at the moment here. 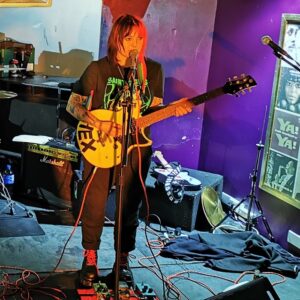 It was Emily’s turn to remain onstage, dropping her microphone and picking up the bass guitar for Hex Poseur (another temp line-up?). I bought their 7″ single ‘Keep It Quiet (Vol.1)’ a couple of months ago and subsequently played both tracks on my radio show (both received very positive responses). Harri Betsworth on vocals/guitar doesn’t mess about as she belts out a barrage of lyrics, bouncing from syllable to syllable. The Polly Harvey influence in the song writing is laid bare as a homage rather than a tribute or hero worship. Those songs saunter along before suddenly changing pace and direction to add up to an exciting malaise, angry enough to be full on punk rock, subtle enough to be clever punk rock. It’s all over within 35 packed minutes… Cool T-shirts and vinyl are bought and those not present will have empty Gogglebox lives.