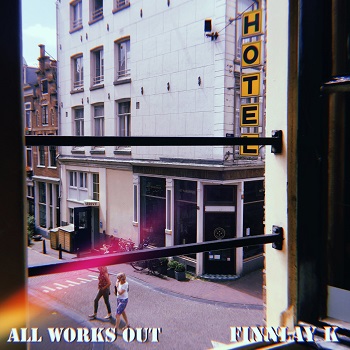 Finnlay K first came to prominence locally a few years ago as one half of acoustic duo Tidal Wave.
The two lads were barely out of school when they started taking their first steps out onto the local pub and club circuit and they were building up quite a nice head of steam when that old devil named The Move To University put the kibosh on the project.
Finn has spent the last three years at Salford, though the last 12 months has obviously been a tad disrupted, but during recesses and at weekends he has made numerous trips home where he has moved back onto the pub circuit and adopted the regular style of playing covers whilst slipping in as many of his own songs as audiences will allow.
Originally it was just his voice and acoustic guitar, but latterly he has utilised a loop station to give his sound more of a “band” feel and this has born fruit on his latest single, “All Works Out”, which lands on the usual platforms at the end of March.
It’s a song that will be embraced by anybody who likes their indie to be less brash and a little more understated, nailing its colours to the mast of HMS Classic Songwriter and relying on its ability to gradually work its magic through repeated plays rather than smashing you in the face from the off.
Song structure, instrumentation and Finn’s voice itself are reminiscent of Lloyd Cole and I for one would love to see Finnlay put together a Commotions-style band to take his songs out on the road where they can be showcased in a manner that will reveal their full colour palette.
He’ll be out and about with his trusty guitar and loop station as lockdown restrictions are rolled back so check out   Finnlay K Music  for upcoming gig details.
NEW RELEASE – Defod – Cerrig Hynafol EP NEW ALBUM – James PM Phillips – Bones