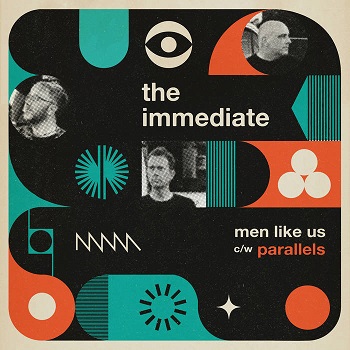 Just when you thought it was safe to put your Lambretta on eBay, The Immediate kick-start up again from out of nowhere (Mold).
They give us 5 new songs (their first output since 2018’s ‘More Sheep Than Humans’ album). The title track Men Like Us betrays a band that is incisive in both songwriting and performing, right down to the intricate detail. Yet, there is no self or over indulgence here, just great tunes played by great musicians

At the forefront of Richard and Duncan’s bass and drums is Adam’s voice. It has that familiar melancholic tinge as he sings; even when The Immediate are firing on all four during Parallels (which really does rock out), it’s still there.

You’ll notice the sleeve may indicate the first two tracks had been planned as a 7″ single, but like a lot of ‘lowly’ bands we are at the back of the pressing plant queue, and digital (and/or CD) is the only real viable way to get our music out there in ‘real time’ (at the moment). Parallels (Pulp Version) also pops up at the end of this fine EP (sounds even better cranked up).

Twisted Lies pays homage to those deceitful Etonians who quaff at our very existence, ‘If you wanna tell lies, the future’s watching you.’ Great guitar sound and even greater break down that slides to the fade. Ghosts In The Machine calms things down (slightly), and when you think it’s going a bit ballady it promptly ends!

There is the threat of a new album… I like being threatened.