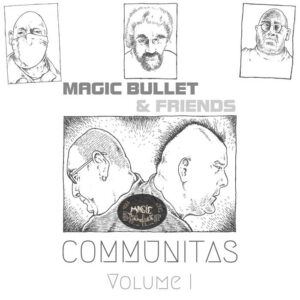 In full view of the Sellafield nuclear power station, the terrible twins of Knott End that are Magic Bullet have released a kind of compilation album ‘Communitas (Volume 1)’ –
It’s a comp LP with a twist… Magic Bullet & Friends is just that, Magic Bullet and their friends, who have collaborated with various weirdos to produce this absolutely delightful release.

The Bullet twins, Skit and Zoyd, celebrating their birthday on this day of the release said, ‘Like most precocious toddlers, we didn’t want to mark the occasion with ‘just another album’, we wanted to have a party, so we invited our friends and ordered lots of balloons and jelly. Communitas is the result. In 3 volumes? It was quite a party! It’s a celebration of the counter-culture communities that have given birth to and nurtured our various incarnations across the decades. In particular, it’s a celebration of the people who make these things happen in the first place; from the ‘local band co-op’ that started the adventure back in 1987, through the golden age of the cassette underground (expect some giants from those days!) and on to the modern digital community we are now proud to call home.

It really is a great piece of work in it’s entirety and features exclusive tracks from Spam Javelin, Shaun Robert and M.Nomized as well as collaborative work.