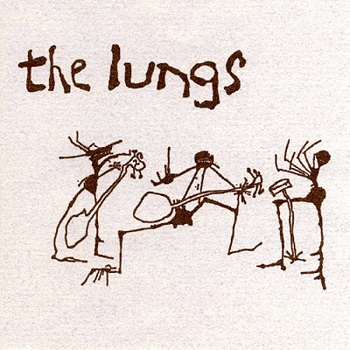 At last..! Turquoise Coal have made this album by Bangor noise-niks The Lungs available.

Originally released as a retrospective CD, ‘Bloody Hell, It’s The Lungs’ captures all their recordings from their brief existence in the late 1980s.

This free download gives you 20 bursts that rarely stray over the three minute mark and open a portal back to a time well worth exploring. Although over thirty years old, it sounds like it could have been recorded yesterday.

Featuring three of the most charming bastards you’ll ever meet in Alan Holmes; who went on to fame and misfortune with Fflaps / Ectogram,  Tim Parry, and the sadly missed maverick that was Maeyc Hewitt.

The Lungs were a burst of unrefined energy on the Bangor scene with their uncompromising sound and great performances, epitomised perfectly by the opening song Stalagmiteman.

That clean guitar is played so hard it distorts over Alan’s great (and historically underused) voice, that unrelenting bass and that two four to the floor drumming all makes a glorious racket.