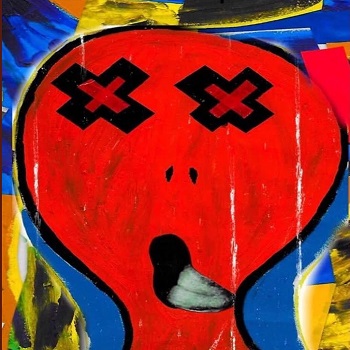 [review by steve rastin]
Wrexham band Alien Feelings sum up their attitude rather neatly by declaring that “there’s only one thing better than a singalong: a shoutalong” and their  “Bondage And Lipstick” four tracker certainly lives up to that credo.

Opening track Good Looking sets their stall out from the off, bursting at you with all the fizz and energy of a well shaken bottle of cola sprayed into your face and its relentless effervescence is somehow reminiscent of The Vines circa their Highly Evolved album.

As hooklines go, the “ooh lalala, good looking” refrain may be simplicity itself but that’s precisely why it is such an instant earworm – why use a dozen words to say something perfectly summed up in just four?

It’s a trick that they pretty much repeat  on Scream, a tale of sexual obsession and kinkiness that is rather darker and scuzzier in tone but which has a “scream scream scream, all I wanna do” payoff line that you’ll find yourself humming after just a couple of exposures (oo-er missus!!!) to its deliciously perverse (matron, the screens!!!) charms.

Lie to Me is ushered in by chiming guitars and a simple bassline that wouldn’t have sounded out of place at the height of the Britpop wars (ask the guy in the faded Menswear T-shirt!!!) before giving way to an offbeat, staccato guitar motif that in its turn leads into another earworm of a chorus.

Town That Made Me is a song that I suspect really comes into its own in a live setting because its call-and-response “where were you” centrepoint is absolutely tailor made for the audience to sing back at the band.

The band are very much the sum of their parts without a weak link to be found and display plenty of diversity across their repertoire to keep things interesting, but the whole is given its primary identity by Josh Evans’s voice which frequently reminds me of Small Faces-era Steve Marriott.

Like everyone else, the band have found their efforts to promote the release hamstrung by the Lockdown, but 2021 will hopefully see an end to restrictions on gigging and a chance to belt these tunes out in the live arena.

With this in mind, and in the hope that life will have returned to “normal”, Alien Feelings will be playing live at the Late Lounge in Rhyl on Thursday, April 1 alongside Rough Vision and Magi Davies.