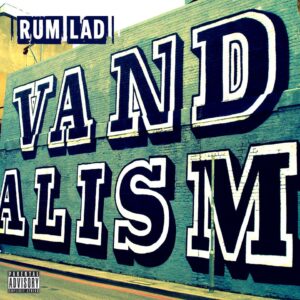 I purchase the 4 track EP ‘Spital Hill’ straight away and although I liked all 4 tracks it was the opening track ‘Shoplifter’ that stood out the most and I was excited to put it into my radio show playlist to see what other people made of it.

The reaction wasn’t immediate but nor was it negative, I left it a few weeks then played it again. In the meantime I got chatting to ‘Rum Lad’ on line who goes by the real name of Richie Tyler Young, he really is a ball of energy, I soon found out that ‘Rum Lad’ is a one man show who writes, plays & produces the whole thing. The more we got chatting I realised this guy was the real deal with a lot to say. He fired over a new track called ‘Tory Boy’ which is an uncompromising attack on our shitty government and how they treat the working classes and even more so now the music & arts industry.

I played ‘Tory Boy’ on my show and it went down a storm. I got more and more tracks from Richie over the next few weeks and it became very apparent that there was enough material for an album. I suggested doing a ‘Crowdfunder’ to see if we could raise the money to press it on vinyl. The target was £900 and we smashed it within 3 weeks due to some real generosity of mates & listeners to my show. For people to back this record and donate money in the middle of a pandemic is really positive something Richie is very appreciative off, he is blown away.

The album has 10 explosive tracks tackling current affairs, everyday life, tales of tragedy, pain and loss. I have labelled ‘Rum Lad’ a one- man explosion, he roars with energy, the sound is massive and for me it’s easily one of the best albums I’ve heard in a long time. The Anti Tories have a new spokesman and this is his manifesto. Get ready!

My favourite tracks – Shoplifter, Billy Bully, In The Gutter.

The digital version of the album is out now for just £5.00.
Anyone who donated to the vinyl can claim a free copy.
The vinyl release will be in early January due to pressing times & Covid.

The album is available through the official Rum Lad website ONLY.