[reviewed by the barefoot rascal] 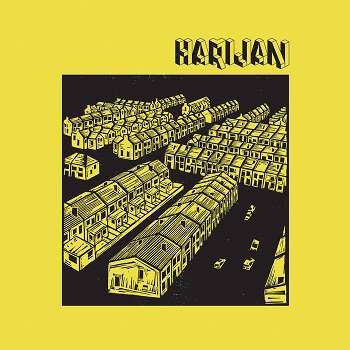 Harijan have been around for years, they seemed to be one of those bands that were always on punk rock gigs and seemed a bit out of place with their ska and reggae-influenced sound. So it was a bit of a surprise to read that this is actually their first album.  I held off buying it when it was first announced as I wasn’t sure if I wanted a double album of ska and reggae in my life. In the end curiosity got the better of me and I duly sent off my money to the ever-reliable TNS Records. The first thing that strikes you is the cover art, a stark yet thoughtful piece of modern design in just yellow and black. Suitably intrigued, I settled down to listen to the 13 tracks and just over an hour of music.

I was hooked from the first song. Harijan don’t just write simple songs, they are masters of their craft as they blend so many different styles and moods into each one. It’s all under-pinned by a superb rhythm section who absolutely nail the reggae and dub beats. Over-laid is an absolute feast of guitars, brass instruments and organs. This really shouldn’t work, but it does, unbelievably well.  Their skill is highlighted in a track like Airhead which starts off with the incredibly catchy reggae sounds before it just builds up until we are in full-on raging hardcore punk territory before reigning the fury back in and keeping it on that tight dub beat leash until the end.

But the real mind-blowing aspect of this album are the lyrics. They are some of the most intelligent and well-crafted ones I’ve seen for a long time. Mike Corrigan has absolutely excelled himself. Each song is dripping with a frustration and anger at the state of society. Whether it’s the working class turkey voting for the Tory Christmas or the difficulty of making ends meet on poverty wages, these are heartfelt stories which need to be heard. On Skint he rails against the gentrification of the working class areas when the city types move in and force the local community out. The burning sense of resentment echoes strongly with me as we see the same type of thing happening with holiday-home ownership in coastal communities in North Wales forcing house prices out of the reach of locals. From the anger of Skint to the almost heart-breaking desperation of Box Packer: “Look here, box packer, four pounds an hour. You’re joking, I’ve got kids to support. And as for my eroding self-dignity, you are breaking me, I can’t go on like this”.

The whole album is laced with pure vitriol and a sense of injustice. This album is to music what the film “I, Daniel Blake” was to cinema; a visceral slap of unbearable reality to the face of a largely apathetic country.

This could be the most important album released in years.