NEW FROM The Turquoise Coal Label 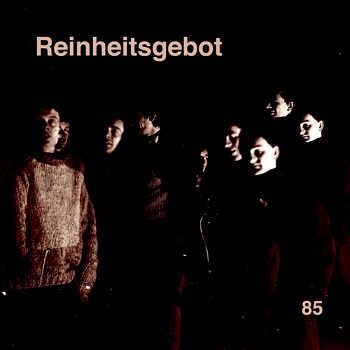 Turquoise Coal – that label in Menai Bridge has once again plundered its treasure trove and released two albums by mid-eighties Bangor band Reinheitsgebot.
‘The Complete RSC Recordings – Volume 1: December 1984’ and ‘The Complete RSC Recordings – Volume 2: May 1985’ cover the band’s sessions at RSC Studios (in Bath). And on listening they’ll take you back 35 years to that indie era when post-punk bands found a direction that ‘normal’ people (and students) found more appealing.
Check out the exquisite Words Don’t Know among many other gems.

The sleeve notes as ever are full of information:
Although Reinheitsgebot played live twice in a formative version featuring future Glassglue / Hungry Dog Brand drummer Emyr Tomos during September 1984, it was not until the first of November of that year that the “definitive” line up – that of Ian McMillan on vocals, Maeyc Hewitt on bass, Scott Saunders and Alan Holmes on guitars and Mark Thomas on drums – made their public debut.

Having built up a dedicated local following, the group made the first of two visits to RSC Studios in Bath on December 17th 1984. Here they struck up a fruitful rapport with producer Rob Craven, resulting in eighteen of the twenty seven tracks recorded during their lifetime. A second visit the following May yielded a further nine.

In between the two recording sessions, the group played a series of live dates in their home area of North Wales, the most memorable being one in a local mental hospital in March ’85 and one a month previously supporting top chart act The Blow Monkeys, where the group was actually fined for mistakenly eating some of Dr Robert and co’s food!

Things were not to last, and soon after the second trip to Bath the group played what was to be their final gig on 15th June 1985 at Treborth playing fields in Bangor. Drummer Mark left to pursue other interests, the rest of the group eventually metamorphosing into Third Spain and the rest, as they say, is history.

Although they existed for a mere nine months during which time they played only fourteen concerts, Reinheitsgebot left behind a legacy as impressive as many groups manage in that many years. Now at long last we have an opportunity to hear again and reassess the many facets of this seminal group – the wistful paeans to the passing seasons, the aching cries of longing, the semi-vehement rockers, the darkly brooding atmospheres – they are all represented here in this trawl through Reinheitsgebot’s rich archive.