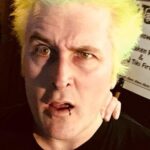 Who came first? This argument has been had in punk rock circles endlessly since the 1970’s. The answer is pretty irrelevant. Since the 60’s Garage Rock and teenage angst had been incubating around the world into what we now know as Punk Rock.

New Zealand bands took some of their cues from English bands as early import punk singles did the rounds. But in the main most bands developed as part of the Auckland punk scene centered around one band, The Scavengers.

Originally the 1B Darlings named after their classroom, 1B, at the Auckland Technical Institute, the band were put together for an end-of-year school celebration in late 1975. They were terrible, but their performance ignited something in the members and they decided to practice, learn some songs and play more shows.

Like most music loving teens at the time the band members were following the growth of UK punk in the NME. The few shows they’d played were chaotic and mainly involved the band heckling the audience. Hearing ‘Anarchy In The UK’ for the first time was a wake up call, it was time to take things more seriously.

The band changed their name to The Scavengers and adopted suitably ‘punk’ names, Johnny Volume, Des Truction, Mike Lezbian and Mal Licious. Regular practicing led to interest from WEA Records after an employee noticed a small crowd of punk teens gathered outside their rehearsal room every week.

The rapidly growing NZ punk scene centered around Auckland venues such as Moody Richard’s and Zwines. The Scavengers became the first resident band at Zwines and most of their early audiences were, or became members of other punk bands such as The Suburban Reptiles, Junk and The Masochists.

During this period singer Mike Lezbian quit and bassist Mal Licious was replaced by Ronnie Recent. The band took punk music seriously and felt that former singer Mike Simons (Lezbian) was more interested in fame than the politics of the scene and they channelled this into what would become a piece of Kiwi punk gold, Mysterex. 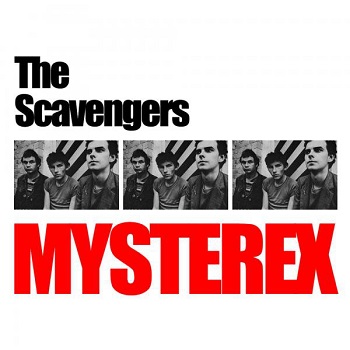 A bit of anger goes a long way and has inspired some of punk’s greatest songs. Mysterex takes a sarcastic swipe at the band’s former singer and calls him out for being a poser. Personally I’m not a fan of the ‘punker-than-thou’ attitude that can sometimes make punk music horribly exclusionary, but in this case at least it led to a superb tune!

Spearheading the New Zealand punk scene encouraged The Scavengers to set their sites on London. The band played a final short NZ tour and afterwards sold all their equipment to buy their UK air fares. In true punk fashion the band blew all the money before leaving home and had to beg, borrow and steal to buy new equipment and air fares. The best they could manage was now Australia and as we’ve seen before, this is where it went wrong. The band changed their name to The Marching Girls upon arriving in Australia and spent the first few months without gigs. Things were tough in Oz but the band persevered and did release another iconic Kiwi tune, True Love, before fading away into other projects.

Members of the band have gone on to acts such as Dead Can Dance and Birthday Party and have sometimes reformed as The Scavengers for one-off shows.

Mysterex is a slice of catchy Kiwi punky pop and is a go-to favourite of mine when I pick up the guitar. The legacy of the song continues to extend to future generations and was covered to great effect by Kiwi garage rockers The D4 on their debut album.

We should all take a leaf out of The Scavenger’s book, don’t be a hypocrite or a dirty social climber….oh yeah.

NEW SHOW – Neil Crud Not On TudnoFM #202 GUEST COLUMN – Steve Rastin – Typical Girls? – Why The Slits HAD To Happen