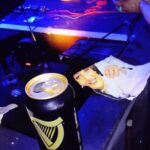 Mission Impossible(ish).
I often think about and am occasionally asked as to what are my favourite albums. In a top 10 there are 4 that will always make it and 6 that are more fluid and subject to change. This is dependent on a couple of factors…. My mood when constructing said list and my increasingly failing memory (it’s a wonder I find my way home sometimes).

I feel kind of bad that so many of the current (and relevant) bands I follow and who have produced great LP’s over last few years have not made my final cut. I am certain that any of… The Domestics, Endless Swarm, Rats From a Sinking Ship, Burning Flag, Nosebleed, Fatalist, Natterers, Ona Snop (cannot wait for the new one next month), Wonk Unit, Rash Decision, Incisions and (ahem)…… Spam Javelin to name a few could easily appear as future favourites. 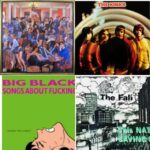 My choices in the main come under the ‘punk’ umbrella as this is the soundtrack to my youth. It was the music that grabbed my attention as an impressionable 9 year old in 1977 and still holds it now.

I loved the rebellion of it all. The way the bands looked, the messages in the lyrics, (words that made you question stuff and form your own opinions), the way it was meant to be played ‘LOUD’, plus I also got a lot of satisfaction knowing that my Mum and older sisters hated it so much. It’s in my blood and I couldn’t imagine my life without it or physically playing these slabs of vinyl. 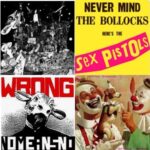 Prior to that, all I was exposed to musically at home was.. T-Rex (great music),  Bay City Rollers (not so great), Bridge Over Troubled Waters by Simon & Garfunkel (catchy tunes) and for some reason Cat Stevens! 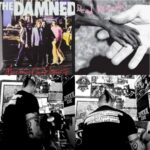 Anyway, let’s get on with it. I’ve rambled enough! Here’s my 10 with year of release and stand out track (S.O.T) for me….

9. The Kinks (Are The Village Green Preservation Society) 1968.
S.O.T People Take Pictures Of Each Other.