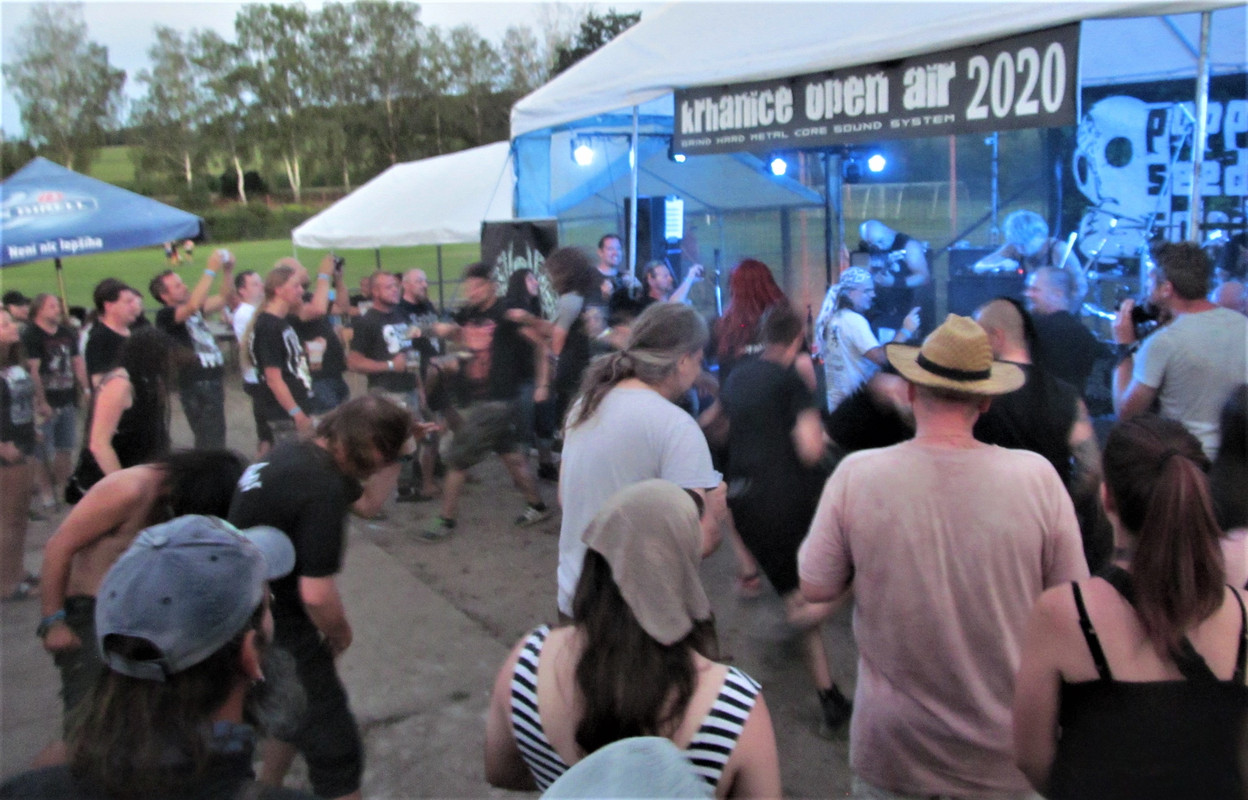 I went to a festival in the summer of 2020. There, recorded for time immemorial, a monument to a
moment of “normal” chaos in the wider insanity of constrained, hushed times. Since 2008 I’ve
embraced festival going as my religious retreats, the epiphanies of self-destructive liver flagellation,
aural ecstasy, revelation, redemption and survival to a soundtrack of your choice. But the prayer rug
and the muddy earth pulled from beneath my feet this year with developing events, already had lost
Pit Fest in Holland in May, and the intended destination here of a return to the glorious Brutal
Assault was also postponed, the spiritual loss and the shaking of the musical pillars of my faith was
palpable. 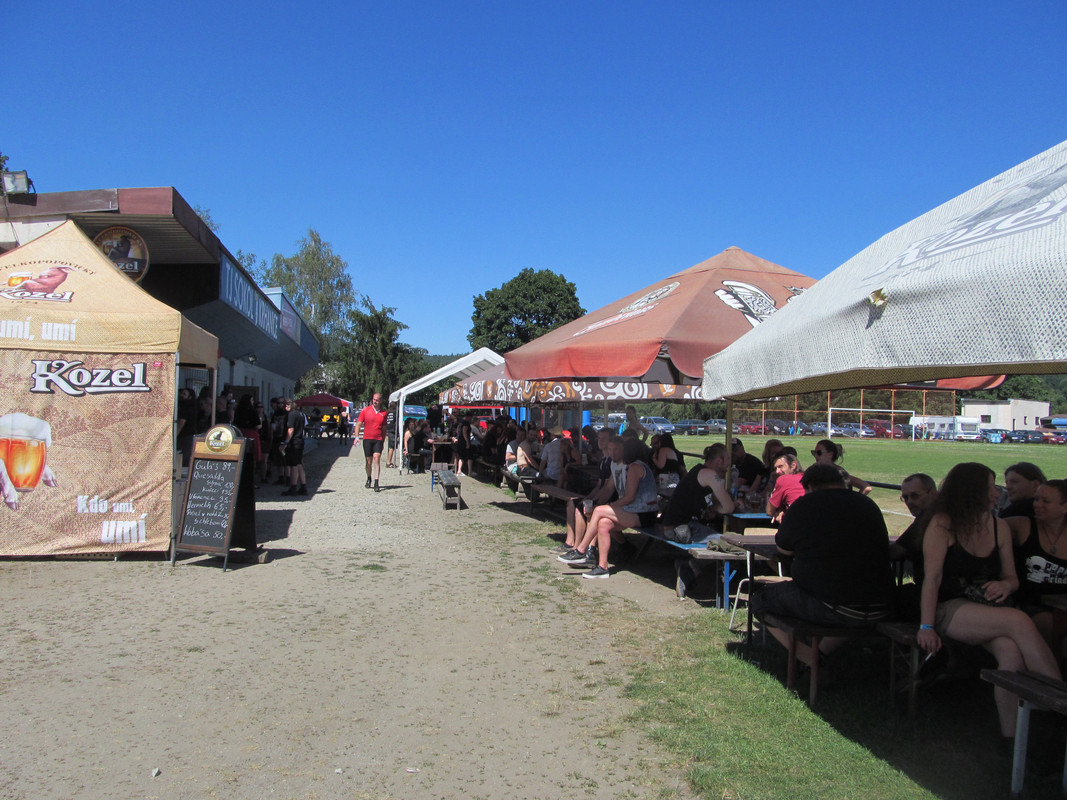 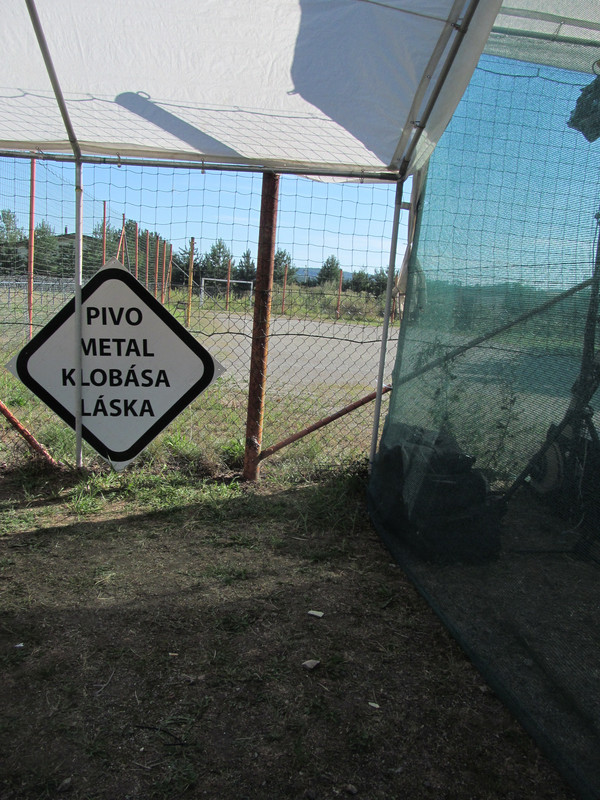 And yet, what is this light at the end of a tunnel that beckons me forth… Seeing as we still had the
flights intact and Czechia was free from quarantine restrictions, our friend visiting over there
reporting back on the situation of actual LIVE MUSIC and giving us recommendations, and you know
what, it’s on. 5 days of Brutal traded for a 1 day outside alldayer. On our own heads be it, let’s adventure.
The place is like a second home anyway, i peaked with three summer festivals here last year, so the
logistics are all very familiar and smooth, the airports and cities quiet, the bars still open and the
beers still quality. I had even been to Krhanice before, remembering the beautiful train ride through
the river gorges south of Prague, but that time was only on the way back from Obscene Extreme to
visit the excellent tank museum out in the middle of nowhere here. Now me and my fellow
travellers took a different turn in the village and headed out to the non-league football ground on
the edge of the village, where some big ceremony was going down. Very reminiscent of trips to
More Noise for Life at Podbor, the modest ground facilities taken over for drinks and food, a
scattering of merch and distros, a small stage constructed, a sound system provide by the host band.
They couldn’t believe that we had trekked here for their little do, but we were the ones who were
grateful for the opportunity. c. £10 for 10 bands, it’s a glorious day in blazing heat for our lunchtime
start, we have a brolly to shelter under and copious fluids, let the games commence. 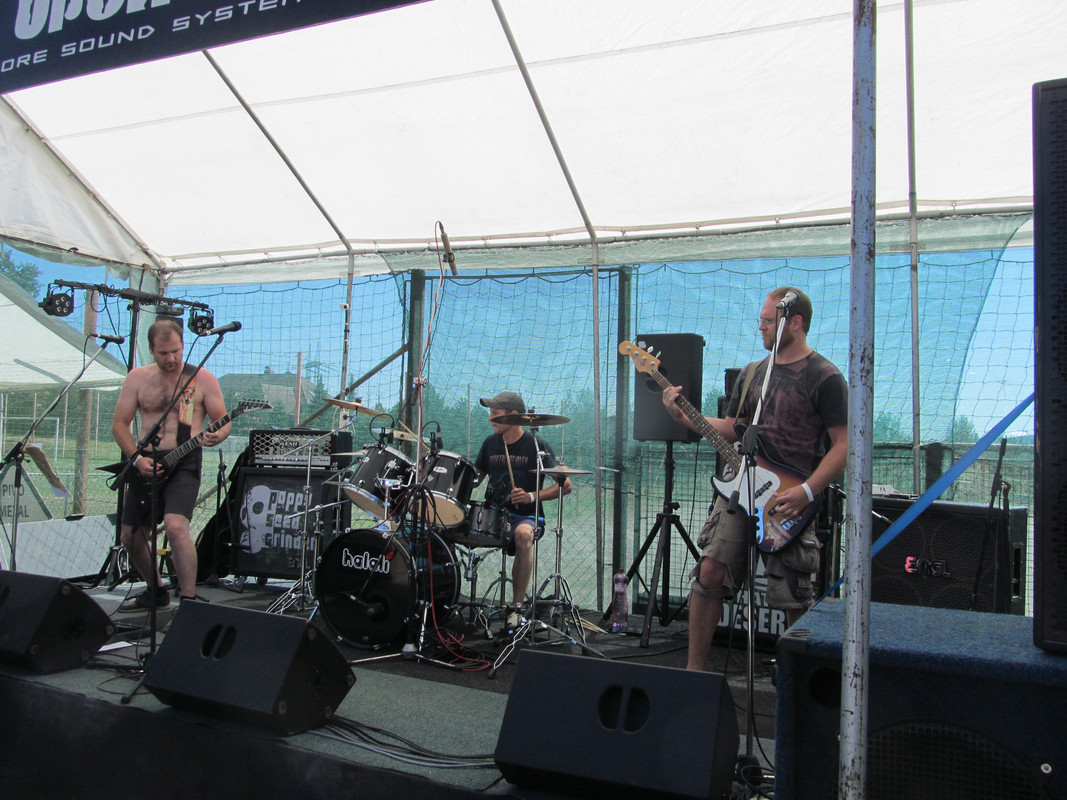 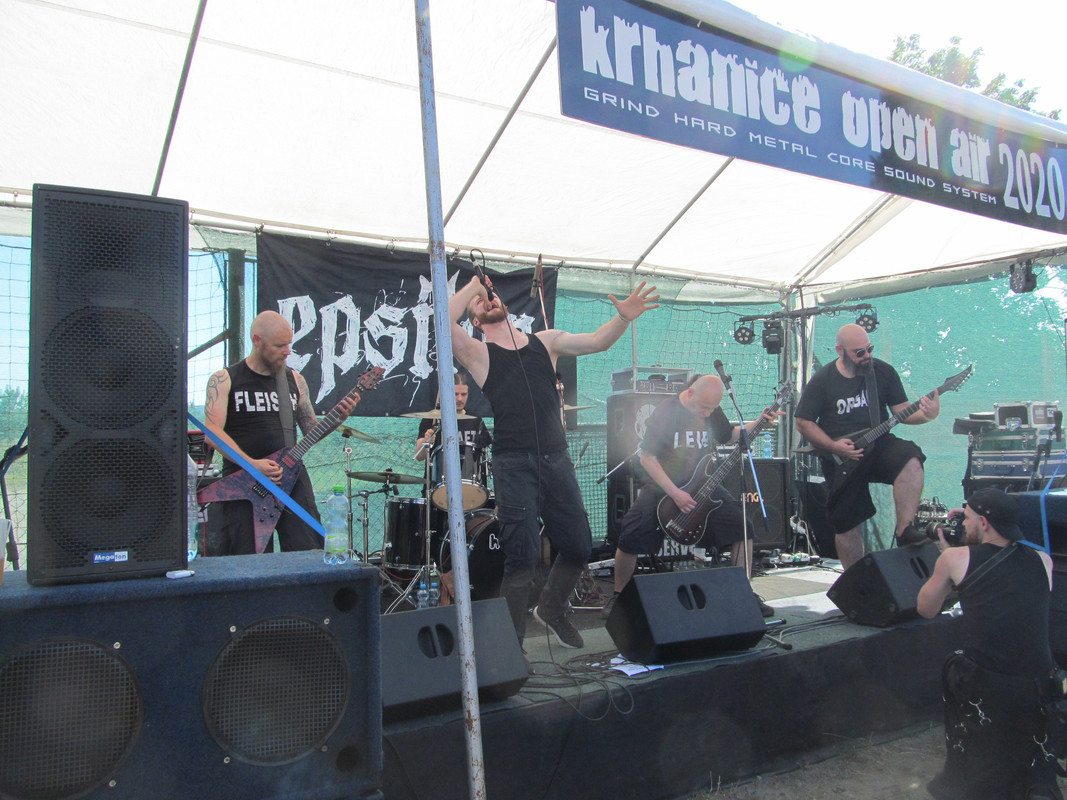 First up a young band Mike Wazowski, bringing the monstrous sound. It’s a rough and ready early
attack of abrupt death metal, but there’s elements of earliest Obituary in their tones which is pleasing. Nicit Palit next I had expected to be the punkiest of offerings today but initially there was more of a stoner rock element before the pace picked up. Took a brief excursion to the village store for Bozkov supplies (as much as would fit uncomfortably down my shorts) and then back for Dying Behind Bars. The three-piece producing an excellent crisp thrashing death, really enjoyable. DPK took things up further in intensity with their harsh and relentless death-grind, before we had some visitors from over the border in Austria in the shape of Epsilon. They had an epic feel to their heavy thrash, with shifting song structures and a strong frontman.

Pikodeath was more raw and pummelling death with some quality gurning, and Cuttered Flesh topped the brutality stakes with crushing breakdowns interspersing the blistering blasting of their death metal. More thrash executed with fury by Murder Inc, again only youngsters but proficient and passionate reminding me of Dark Angel and Kreator in their relentless battery. 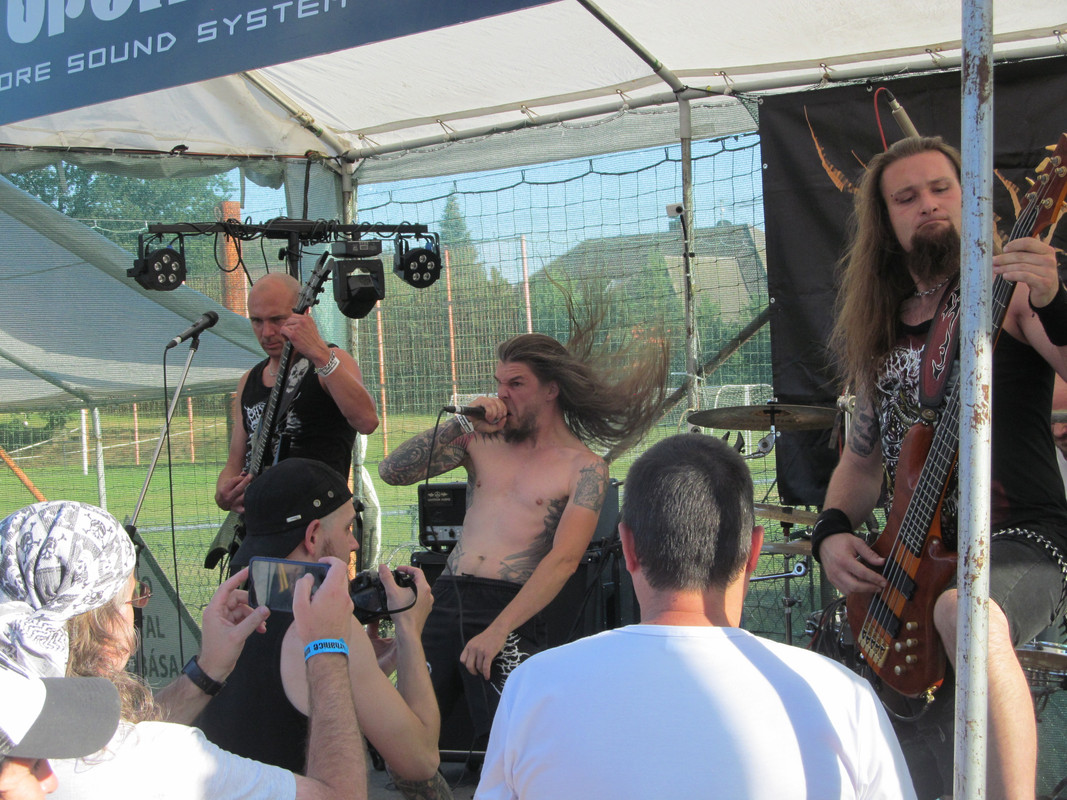 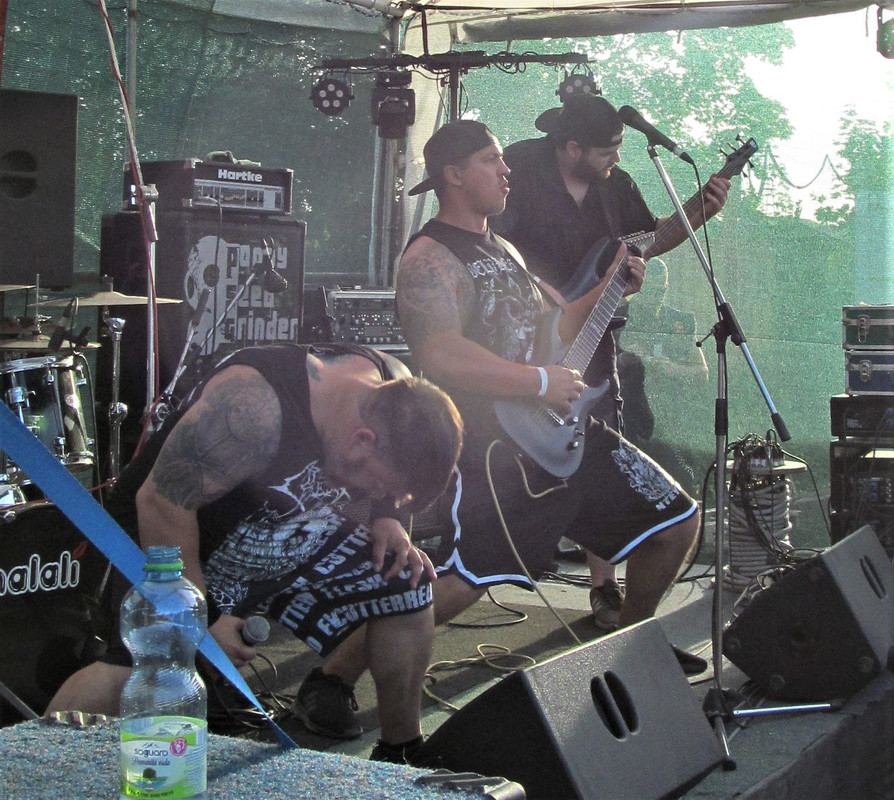 The quality of the bands had been consistently top notch, helped by a solid PA system. The day had stayed roasting hot but limitless beer and freshly made food had kept us sustained, including the generosity of new friends, even when one declared himself a “rasist” we took the rational option of gently explaining where he was wrong. There was a great party atmosphere in the sun, the 100-150 here including families with kids, some mild pits of social non-distancing occurring, as many people gathered sitting or lying chatting and celebrating the get together. Well organised and curated.
The event hosts, Poppy Seed Grinder, were to be our last band of the day before getting a train back to the capital. As the sun set they launched a truly ferocious heavy grind onslaught, new lady vocalist with a stunning roar of power, an intense and immense conclusion. We staggered away in the dark to find the train station again, but in our somewhat confused state were more confused by the scheduled train on the one track coming in the wrong direction, and elected not to get on.
Turned out it was the one and just going round the block so to fill the time til the VERY last one we trudged back to the fest to catch the closing band Halali, who were a bit more of a mad mix of stylesmbut obviously held in cult status and fondness by the crowd that was still gathered til the end.
Second time lucky we had the last single carriage train party back, fending off Bulgarians but also thoroughly savouring the whole event, satisfying to the restless musical soul. On the continued tour of Czechia and Poland we did happen upon other musical events (Whiplash style jazz buskers in a town square, some industrial metal in a castle, a 3 day mini fest in a biker bar) but this had definitely hit the spot already. 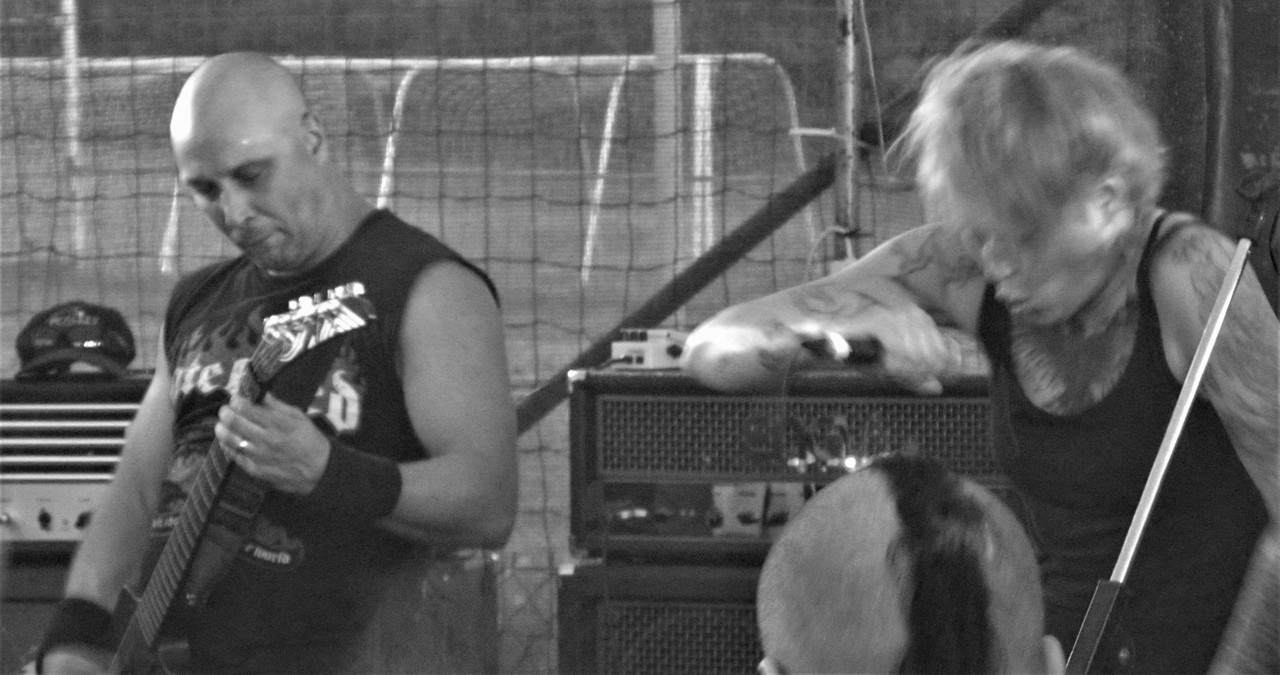 Seems so long ago now though… now Czechia is on the “naughty list” of quarantine destinations, and we see-saw back and forth with the prospects of “proper” live music here. Still, i have the faith in the resurrection of the scene so let’s keep praying and playing. Cheers! 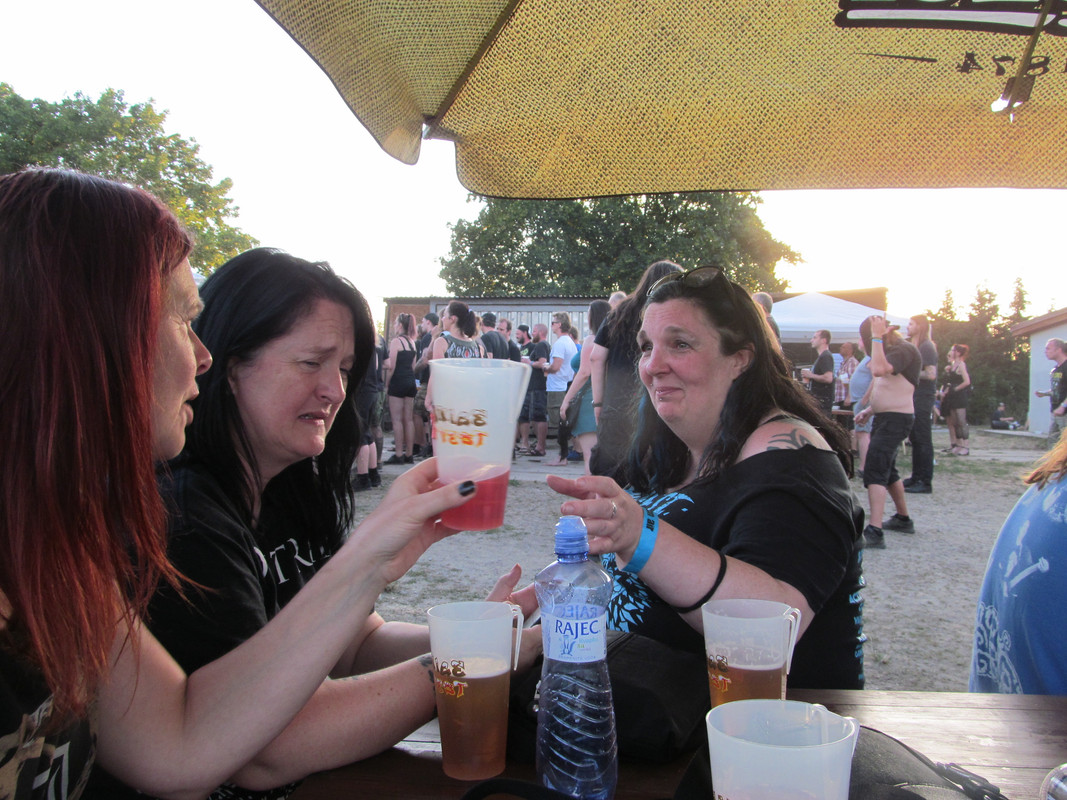 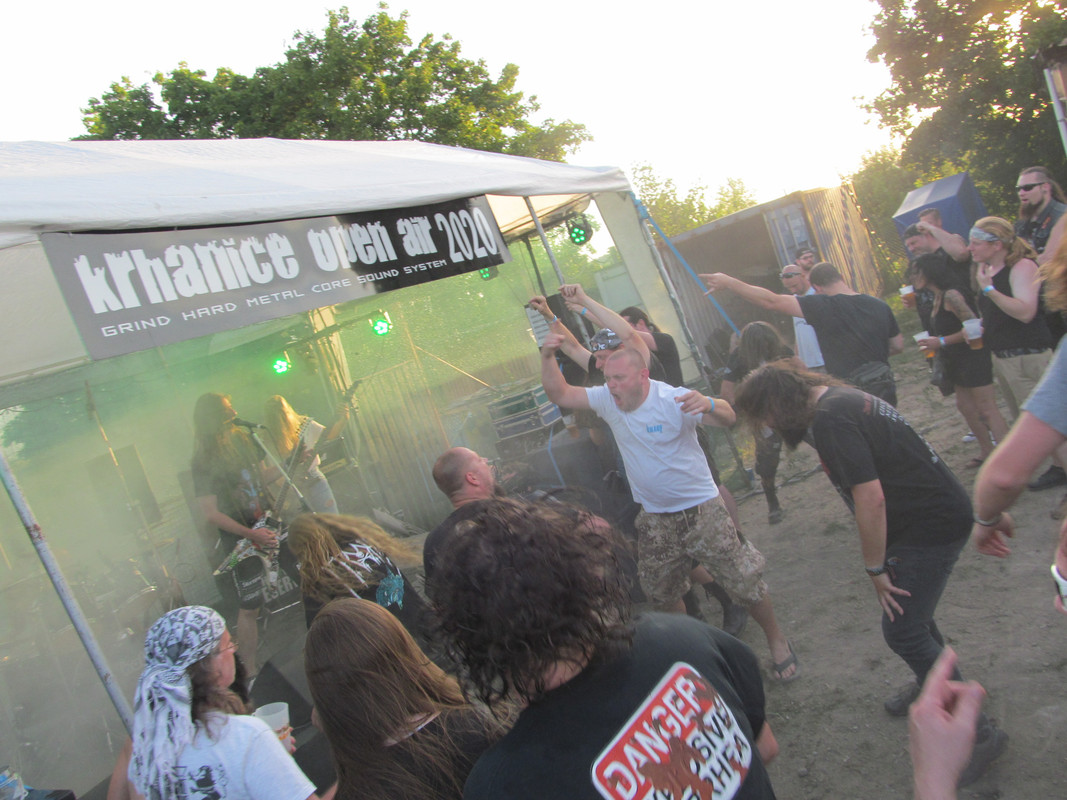 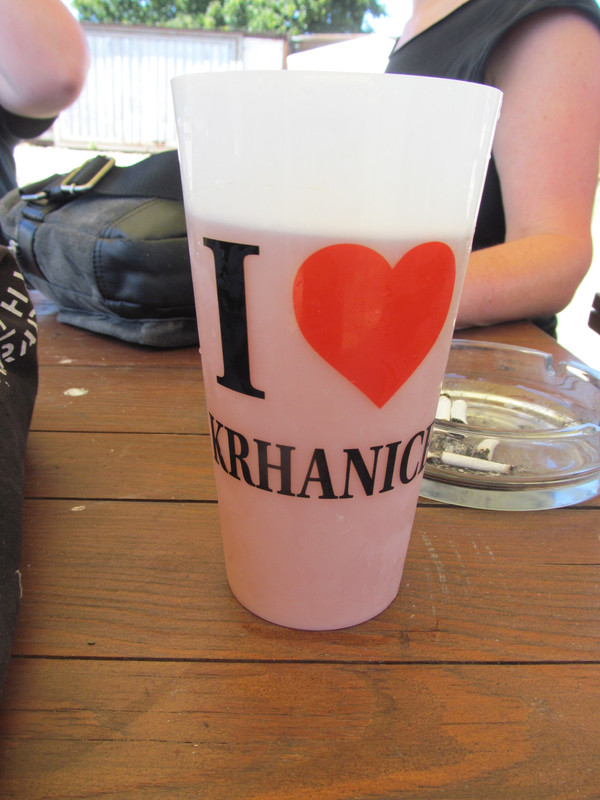