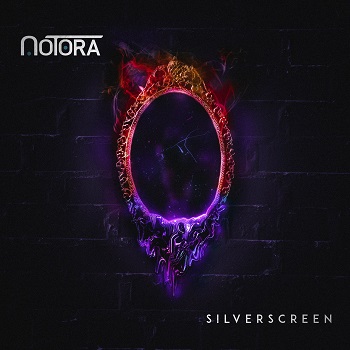 Perhaps it was subliminal suggestion brought about the song’s title, but the word “cinematic” immediately sprung to mind as I listened to the intro to the new single by Notora.
It’s called “Silverscreen” and Darren Dorling’s drums certainly invoke a sense of drama before the guitar and bass crash in with the kind of crunch that bands with a far heavier aesthetic would willingly trade their whole collection of pentagrams and inverted crosses for.

Even in their pre-Notora days as Cry, the band had developed a soft-loud dynamic in the majority of their best songs and that is very much in evidence here, but Notora always do something with that basic format that is far more interesting than their peers and that can be attributed to a single word: texture.
Dylan Lloyd’s voice swoops across the song, keening wordlessly in between the lyric lines in a manner that can only described as a male version of Siouxsie Sioux in her ice queen prime, while his guitar switches effortlessly from crunching powerage to nuanced soloing with an ease that is dizzying.

Similarly, Darren has a sense of touch and dynamics that are unparalleled in these parts, giving the percussive elements of the song a range that would travel from scarlet to indigo were they rendered as a colour spectrum.
Meanwhile bass player Sam Green is the Kalvin Phillips of the outfit (believe me, there is no higher compliment than that coming from a Leeds United fan!!!), the engine that drives the whole thing along and frees up the space for Dylan and Darren to show their chops.

The song boasts some lovely production subtleties, such as the echo on the middle section vocals, that enhance the overall dramatic effect and signpost the ever growing maturity with which the band are approaching the recording process and which bodes well for a full album’s-worth of material.

The one downside for me personally?
The fact that I can’t crash this out through a full PA in a rammed venue to an appreciative audience, at least for the time being.

I will be bringing Notora to the Late Lounge in Rhyl as soon as COVID restrictions allow me to, but in the meantime we will have to be satisfied with turning our eyes (and ears) to the “Silverscreen”.