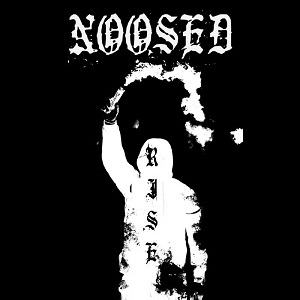 14 minutes of sheer mayhem are on offer here from Hardcore Grudge Thrashers Noosed. There’s an industrial vibe oozing from the whole of this release together with an intensity which is, err, intensified by the production, or lack of it, but in a good way.

Take ‘Never Going Home ‘ for example. A proper sludge / Industrial speed effort. I love the guitars in ‘Rats ‘ as they emulate that early Napalm Death sound, as they also do in ‘Going To Fall ‘.

‘Bleed ‘ boasts some manic drumming throughout and ‘Rearranged ‘ is as intense as it gets. Title track and album closer ‘Rise ‘ offers a nice opening riff and grows as a song throughout. It offers a furious ending with neck breaking speed.

This is actually a good album although I do feel that it would have benefited so much more with good production, but maybe this is how the band wanted it, and if so, lovely.