New Release – Abi Sofia & Alan Holmes – Something You Might Lichen 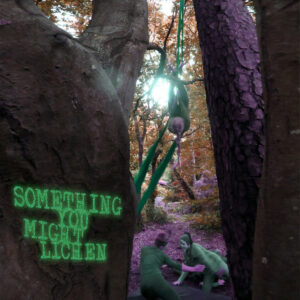 It’s always good to get a flurry of activity from Menai Bridge based label Turquoise Coal. Run by that aficionado Alan Holmes, he has once again allowed into his world of quark, strangeness and charm.

So let’s concentrate on the new… Forever the collaborator, Alan has coerced with Abi Sofia to produce a piece called Something You Might Lichen. In it’s 9.52 minute lifespan, this remarkable passage explores the relationship between algae and fungi as they come together to form lichen, the fungus capturing the algae to use it for photosynthesis, fungi not having independent photosynthetic capacity.

Starting like soundtrack for a skewed version of ‘Apocalypse Now’ incorporating Sitar, Bulbul Tarang, Balalaika, Harp, Mandolin, Panpipes, Guitar, Thighs, Voice, Piano, Cello, Electronics and Tibetan Singing Bowl, Something You Might Lichen is a play, a ballet, a story… Love the narrated extremely short poem at the end.

A performance took place in the lichen-rich Coed Cyrnol (just behind Waitrose in Menai Bridge) on August 23rd 2020 as part of the Surrealist Saffaru event and featured movement by members of the theatre company alongside a specially composed musical piece by Abi Sofia and Alan Holmes.