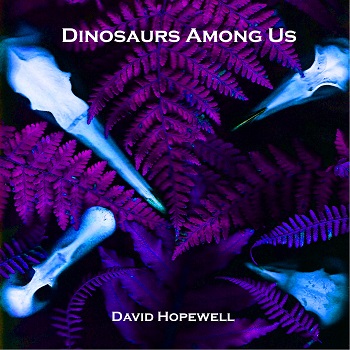 The Recordiau Cae Gwyn label is about to release this remarkable piece of work from Bethesda’s David Hopewell.

‘Dinosaurs Among Us’ lands on December 18th.

David Hopewell is one half of Hopewell Ink and was a driving force in Bangor legends Burnham Burnham. He has particular interests in improvisation, environmental recordings and live performance. His work appears regularly in a variety of concert settings, as installations in art galleries, and occasionally gets played on BBC Radio 3.
The high-speed complexity of birdsong cannot be fully appreciated by human ears. When slowed down it becomes a thing of wonder: Charlie Parker riffs; choirs; overtone singing; some bloke whistling a catchy tune; gentle humming. The source sounds for Dinosaurs Among Us are recordings of springtime birdsong in
North Wales. Both Dinosaurs Among Us and Urvogel start with unedited, slowed-down recordings. Snippets of found music are then teased out into more structured compositions.

A version of Dinosaurs Among Us with an accompanying video was produced for Oscilloscope, a monthly (currently on-line) event focusing on experimental electronic music.
The ancestors of modern birds were feathered dinosaurs. Perhaps those ancient creatures sounded like the slowed-down birds in this piece. The long immersion mix uses the recordings to create a 26 minute-long acoustic environment that links the imagined sounds of dinosaurs with the songs of modern birds and
studio electronics…