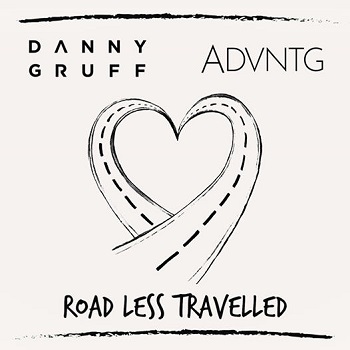 North Walian singer/songwriter Danny Gruff has just released a new EP called “Road Less Travelled”.
Prior to lockdown Danny was a musician whose commitment to live performance was second to none and during his career he has shared a stage with acts as diverse as McFly, Bastille, Frank Turner and The King Blues.
The EP leads off with the title track and the song’s commercial potential and his influence from the likes of Lennon and McCartney in particular is instantly obvious.

This is a song that demands to be heard on daytime radio, and it would have been perfect drivetime fodder in those long-lost days when we were encouraged to commute to the office (remember them???!!!).
It’s a song whose pace is admirable, gradually building in intensity into a final flourish which would have had you singing along, thumping your steering wheel in time as you sat in that six mile tailback on the M62 caused by the lorry shedding its load of non-essential Argos tat that used to seem so important to us back then.
Songs about relationships gone sour are hardly short on the ground, so lyrically it’s not exploring any new territory, but it avoids the self-pitying alas-poor-me whingeing that too many of its type revert to and instead exudes an air of optimism, as if the writer is almost happy to embrace a new start.
It’s followed by “Keep On” which, in all honesty, is the track I prefer out of the two.
It’s cut from the kind of semi acoustic musical cloth that has been so successful for the likes of Milky Chance, Vance Joy and (gulp!) Ed Sheeran so it would be an obvious shoe-in for heavy airplay if it was to be released by Britain’s richest under 30 year-old on a major label.
Its commercial achievements are likely to be a good deal more modest than that, which is a pity because Danny seems to have a natural ability to write a big chorus and this track is no exception, its hookline underpinned by a footstomping bit of percussion to give it that extra bit of bite.
Both tracks have been remixed by ADVNTG – what is it about these producer/ remixers obsession with capital letters and dropped vowels – I’m thinking of adopting FCKNG CLCHD as my own!!!
Nothing wrong with the music though which completely strips the title track down, hijacks the one lyric sample and welds it onto a motoric rhythm that although contemporary nonetheless tips a wink to 80s synthpop.
Perhaps a little too polite to be a big Main Room tune but certainly one that I would drop into one of my warm up sets with complete confidence in its appeal.
Conversely, I’m not so keen on the remix of “Keep On”, which keeps far more of the original cut intact and seems to be tampering at its edges rather than owning the track and giving it any kind of radical makeover.
Hopefully it won’t be too long before Danny can get back out on the road again, but in the meantime this EP has more than enough to keep fans happy.
Click here for release details, catch up with Danny on Facebook and discover ADVNTG here.
GUEST COLUMN – Skip Dwight – Toy Love – ‘Pull Down The Shades’ NEW SHOW – Neil Crud Not On TudnoFM #202