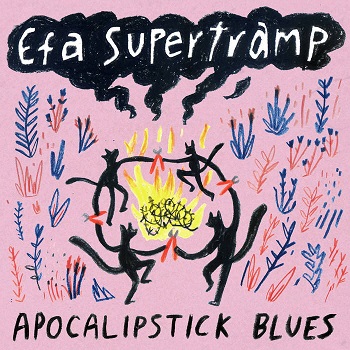 For all the punks, the squatters and the queers – the delightfully titled ‘Apocalipstick Blues’ from Efa Supertramp is the perfect handbook to the real world. It’s full of warmth, sadness, hope, anger and humility… The folk-punk riot grrrl from Pwllheli is true to her word, has stuck to her guns and draws them to shoot the ruling elite right between the eyes.

Fifteen songs, most clocking in at over four minutes long, this is not a short album! There again, it’s been five years since Efa’s last (and debut) album ‘Rhyddid yw y Freuddwyd’ landed, so she has a lot to sing / scream about. Suffice to say, the world has gone from bad to fucking terrible since 2015 and a lot of that is covered across this release.

From hangovers to personal loss to travelling tales to oppression to suppression to revolution… ‘Apocalipstick Blues’ brings melancholic anger and frustration but also hope; particularly with the closing track Keep Looking.