ALBUM REVIEW – Telefair – The Dimensions That Separate Us 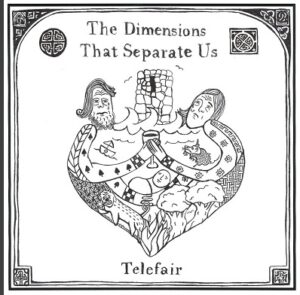 The court jester has roosted and sired… Or least that’s what you’re lyrically led to believe.
Long before Tim & Sam & Golden Fable hit the rolling green hills with their twee indie nonsense, Telefair was doing it for fun… And he still is.

Telefair is Bodelwyddan’s Joe Booker – or Joe Gintis if you like – the manboy behind many an intricate melody found on that Gintal output.
‘The Dimensions That Separate Us’ is Telefair’s new album, adding to a sporadic decade spanning catalogue that is not bound by rules. Some have come out on a CDr with a stapled handwritten sleeve and others have been released on Spotify / YouTube (like this one).

Despite this inconsistency, what is strong and stable is the quality of the output. Intricate zygotic melodies weave around Joe’s bizarre view of the world (this time, mainly from within, keeping your heart in his home).
It’s truly a beautiful but ever so slightly twisted album, full of turns and twists, crammed with instruments – guitar, banjo, bontempi, recorder, piano (almost Mike Oldfield)- yet the subtle separation of sound is very clever.