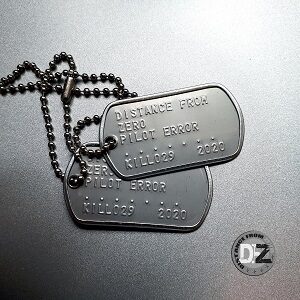 [[[Reviewed by The Instigator]]]

‘Pilot Error’ is the debut full length offering from Manchester based post-punk band Distance From Zero.
Information on the band is scant, with research throwing up very little other than the fact that they emanate from the North West. However in today’s narcissistic ‘me, me, me’ Instagram culture, saying less can sometimes mean a hell of a lot more and this is certainly the case with DFZ. This is a band who want to dispense with the niceties and get straight down to the music.

Calling them post-punk is actually doing them a massive disservice as there’s a whole melting pot of sounds and influences going on here. Take album opener The Truth Behind The Lies with its Clash tinged reggae backing. Don’t Wrong The Rights and its dual male/female vocals hark back to the 90s and Radical Dance Faction at their most hard hitting political best.

You’d be forgiven for thinking they were going to plumb the depths of despair and get really dark with a track called Blasphemy but no, DFZ go total 80s pop on us. It’s uplifting funky backing sounds like Orange Juice jamming with Spear of Destiny and a chorus The Alarm would be proud to chant. To these ears it’s the album highlight.

Elsewhere on the album, other highlights can be found in Sick which channels the spirit of John Lydon and PiL and What It’s Worth reminiscent of  Gang of Four and early-Killing Joke.

Overall, a varied debut which packs a solid punch. I look forward to seeing where DFZ heads next.

GUEST COLUMN – Steve Rastin – Back To Blu …And Beyond? NEWS – Skinflick Go Digital