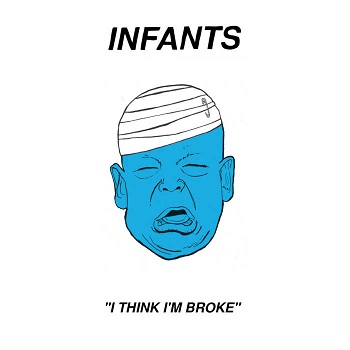 I’ve long cast a suspicious eye over bands who change their name… It’s usually to hoodwink the music industry into thinking they’re a ‘hot new act’ rather than that band that’s been on the circuit for years. However Infants is a far better name than Forever In Debt and I doubt Craig and the band have any X-Factor aspirations – more like X-Fuckter…

Infants spawned from that fuzz mangled cesspit called Widnes where, with bedfellows Salt The Snail they created Society Of Losers; a label, a collective, a bunch of maaates that spring-boarded a whole scene.

I’ve documented before that Infants both fascinate and scare me… There’s that element of not quite knowing what’s going to happen next when they’re playing live, so self-preservation keeps me at a safe distance. Yet, simultaneously I want to get close up and personal and plant my head in a speaker cab to get the full hit.

I Think I’m Broke is a teaser… A belting crying wrenching kicking teaser for what is to be their eponymous debut album… Followers of the band will be rest assured this track is as intense, as threatening and as cool as the band’s previous output… It screams out in despair – yeah!

The onset of the plague has put the album release on ice for now, originally planned for January 2020, then May, Craig is not sure when we’ll get our faces chewed off listening to it but reveals; ‘It’s more of a collection than an album I suppose,’ he says, ‘half songs that are already out and half unreleased stuff.’