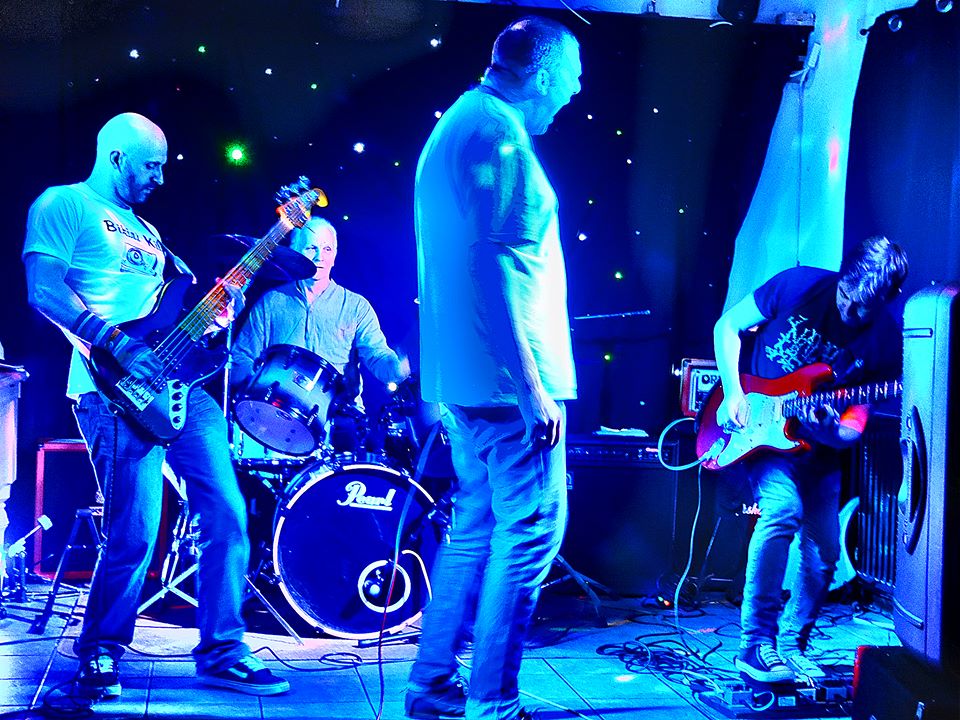 Hailing from Bangor, Rabo De Toro are quite literally a (non)punk phenomenon… I put a non in front of punk because the music is some crazed psycho-jazz-rock-punk that is too fluid to rest in any hole your pigeon fancies. However, if you agree that political social commentary and spitting on those in power is punk rock, then Rabo De Toro are more punk rock than you’ll ever be.
When Charlie Garlic, Duncan Black, Dave Taylor and Paul Mattock perform, the stage becomes theatre, and they may well mock the society we live in with a humorous view point, but if they could start a revolution…

The last three times I’ve seen them live I’ve come away thinking ‘there’s no way they’ll top that performance.’ I’m elated by the sheer nonsense of it all, I’m angered by the subject matter – it makes me want to manufacture Molotov Cocktails and start a riot and I’m also blessed having seen such a fantastic band.

I caught up with Rabo vocalist Charlie Garlic…
Boring, I know – but we could do with a little Rabo De Toro background… How and why you formed… I know plenty about the other members and their salubrious pasts, but very little about your own – have you been in previous bands?
So we have been going for a few years now.. Gigging sporadically for the last couple. We started with Joe Shooman [ex Vaffan Coulo] on bass but he moved away.. He named us, but to be honest cos he moved he’s dead to us now…fuck him.
Dave came along and got us sorted, Dunc and Paul knew each other and had played in other bands etc. I’ve done lots in lots of bands and on my own. Loads of stuff as a kid/late teens in Manchester managing to resist being another fucking Oasis clone band, played lots of venues, done all kinds of performances from theatre to circus to performance art twaddle. I’ve done classical guitar gigs and even once played to a dinner of forensic pathologists, hard to play finger-style when all you want to do is hurl at the rank deviance of deaths being discussed. I’ve even done circuit bent electronica with rewired toys. But the link to Rabo is me and Dunc played together for a bit when I was in The Logic of Impossibility. Charlie has featured in a lot of my work from throughout the years. 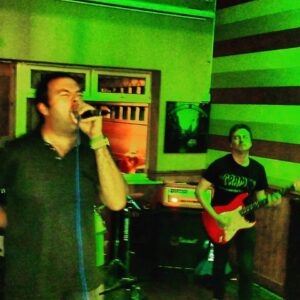 OK, so Charlie Garlic is your stage name right? I notice you get into character pre-gig and start pacing up and down… How much of you is in Charlie Garlic…?
Charlie Garlic is a character but it’s all part of me and my history. The name is taken from a real person from a family story. I do pace and tic a lot and the stimming I do is actually a lot of me dealing with performance; but it also helps me physically warm up and get my heart rate raised and stuff. It’s quite a thing to get that level of emotion out of the bag in front of a crowd, but brilliantly the chaos anarcho zen burn shit of this band gives me the free space to do all the crazy stuff. All my body needs to do to cope a little.
Charlie is tormented but actually completely sane and well adjusted, that’s the irony of his character that he has, as he says “a normal response” to the world in which we live. The pacing and stuff is only the thin end of the wedge, everything he does has a bit of weird meaning. Like have you seen he cleans the floor of the stage area? He picks up and moves tiny sliver of shit/crap/paper whatever before starting? That’s a thread that has been in since Gig #1, but has only just been revealed in the new piece Temporary Employer, and he bangs on about the fragility of temping and employment and how the floor is sticky. Well that floor is sticky and it’s hard for people to get off the ground these days in every sense. As charlie sometimes sings in The King Of Rome “I had to try, a man can crawl or he can learn to fly.”  So Charlie always likes to tidy the floor trying to relieve the stickiness… By the end of Temporary Employer though the floor is sticky with his employer’s blood, spilled at the shiv from a Bic Biro…
Charlie also goads John Revolting on guitar… He quite often fucking screams at him in gigs repeatedly asking him to burn it down… which he fucking does… man he can slay that guitar into people.

I have said in reviews that I regard Rabo De Toro as the most important band of our time as you convey an important social statement through angry humour… Is this a deliberate ploy?
Well that’s an honour for a start that you say that. I think as a piece of theatre it needs a bit of light and shade otherwise it’s just too much solid noise so the anger and humour and often peaceful sections where Charlie is waffling or singing a jazz standard from the 50’s are all as much part of it. And yeah. We are trying to make people think. I mean fucking hell; it’s all a bit fucked isn’t it and yet most people are just pacified at home having a wank to the X-Factor or something when people are burning in their flats for the want of a bit of better fucking cladding. People we begged to uproot and come to the UK after WW2’s kids facing deportation and shit….rape culture and lack of consent…austerity… yeah.. lots to say.

Does it frustrate you that you seldom play beyond Bangor? (It does me, on your behalf…)
Well yes and no… It’s hard to herd us together for dates and stuff. We have had some belting gigs outside of Bangor but I know what you mean. The Skerries though is like the mothership, it’s always a good night in there and Mr [James] Phillips is a fucking Grade A diamond and we always want to support him if we can. We have some gigs booked at the Pot in Rhyl, another fantastic venue and also some irons in the fire in Chester. 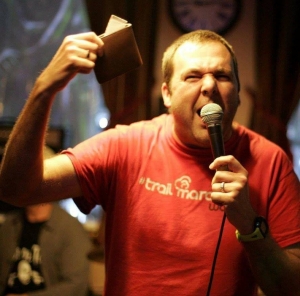 Rabo De Toro manifesto?
No god no masters. Burn it down, have a Murray Mint.

Plans in the pipeline?
Always… but again always hard to get us all together to get shit done! We’ve said for ages we would love to come and do a live 10 minute slot on your TudnoFM radio show for example … but have we got it together? Have we hell…
The other plan we have at the moment is to maybe do another gig at Neuadd Ogwen in Bethesda cos that stage and venue is just flipping awesome. We are thinking about funding it ourselves and curating a great collection of stuff.

So within these plans, is there any chance of there being a Rabo De Toro album?
Blimey… We really need to. We really want to do a live album but again getting around to it is hard.

A question I always like to ask is… Who are your favourite local bands and why?
Flip.. I’ll say right now I don’t get out often enough to support local bands with having young kids and work etc.. But hell.. Love Glove and Stephanie Finnegan! Fuck that goddess can hold a room with as much energy as Charlie can but just with an un-mic’d voice and an acoustic guitar… proper.
John Lawrence does sterling stuff, everything so well crafted and poised… as well as mental.
Spam Javelin sound tight at the moment, not blowing smoke up your arse (well unless you ask properly). Interested to see Dilation grow and prosper. Did a gig a while back with The Glitches who sound ace.

And finally, do you have a message for those reading this?
Rage is right