Being situated on an industrial estate on the outskirts of Bologna meant a taxi ride from our city centre hotel. Steve Sync and myself had taken a swift vacation to this wonderful country to take in a bit of hardened industrial music.

Brandishing our tickets at the gate, we were told we needed an Arci Card (as in Archie) or we weren’t getting in – ‘that’s ten euros each please…’ You robbing bastards! Things worsened when the first band went on – Temple Of Venus – they started off with a promising ‘Revelations’ era Killing Joke guitar sound and that’s as good as it got. A duo and a drum machine playing uninspiring semi-goth. They were however leagues above the next act, an English duo called Client who perhaps got lost on the way to the Britain’s Got Talent auditions… I began longing to be in Conwy at the all-dayer going on there, watching quality bands like Mwstard, and started questioning the concept of a dark industrial festival that hosted pop bands. Don’t get me wrong, both acts were excellent within their own fields of joy, but not here, not right now.

Thankfully my prayers and graces were answered as Dish-Is-Nein took to the stage – now this was exactly as promised – Dark Industrial – with superb visuals. Fronted by the bleached and towering Cristiano Santini, the band have an immersive presence. You are drawn in and you are absorbed by the immense sound, you are kept alert by the continual cybernetic/biological backdrop videos and by the rotating songs that warped from Nein Inch Nails to Numan to Nitzer Ebb. There are occasional vocals from Valeria Cevolani who bursts onto the stage two or three times to mix things up with her infectious voice. There’s an industrial steel drum being smashed with a lump hammer and chain in true Einstürzende Neubauten style as Mussolini is ranting in the background! Their one hour set went fast… Too fast.

With no ear plugs and my head pounding and Italy trying to kill me with alcohol, hayfever, asthma and eurotrash, I managed three songs of Young Gods before beating a retreat to the sidelines, where I promptly passed out. So I’ll hand you over to Steve Sync…

I’ve been a fan of The Young Gods ever since I heard the powerful churning guitar stabs, hypnotic drones and rumbling bassline of their track Skinflowers back in 1992 off their “TV Sky” album. Along with this album I’ve collected and consistently listened to the Swiss 3-piece’s six other albums and various other projects over the last 26 years. Their music has changed a lot over these years and the band have had a couple of line-up changes too, but they always continued to create powerful, alternative and unique music which has always kept my interest. This band aren’t afraid to experiment with new sounds or rhythms either, making some of their albums like a journey through a futuristic world of noise. They’re very hard to describe because of their massive musical range but I’ll have a go – Full on “Killing Joke” style rock guitar samples, lead guitar riffs, rumbling bass sounds with reversed cymbals and a space-scape of electronic sounds and noises over live thundering drums and droning vocals through to atmospheric acoustic instrumental trance melodies.

I’ve been lucky enough to see The Young Gods live a few times throughout their career, most famously when I blagged my way into becoming “Skinflick’s road crew” when they supported The Young Gods in The Masque in Liverpool in 2005 (still eternally grateful to MWJ for getting me that gig) and I even got to witness The Young Gods setting up their equipment and soundcheck using Skinflowers (still a highlight to this day). I’d last seen them in the UK at Manchester Academy, December 2010 when they were touring their then new album “Everybody Knows” (their last to this date). Since then over the years I’ve been keenly looking out and checking their website regularly for news of any UK gigs to no avail.
In 2012 they played a small series of gigs on the continent welcoming back their original keyboard & sample player (and co-founder) Cesare Pizzi. On this tour, the band celebrated their 25 year anniversary by playing tracks mainly from their first 2 albums “The Young Gods” and “L’eau Rouge”. I wasn’t able to make the journey over for any of those gigs, but I kept looking out for potential European gigs to travel to as it now appeared likely that they weren’t planning on coming back to the UK. The band have played less and less over the last few years, mainly playing European festivals and special events so this started me on a mission to secure a trip over to see them once more before they decide to call it a day. I was close to going over to Cologne to see them last December, but work commitments prevented that. Moving on to 2018, I noticed they had a few festival dates booked in April & May so a European trip was now a must do!

The Neuropa Festival in Bologna was my chosen target, a “new wave, post-punk, industrial” festival spread over 2 days with a line-up including Gang Of Four, New Model Army, Dish-Is-Nein and The Young Gods to name a few. As Mr Ryanair decided not to fly to Bologna on the Friday (first day of the festival), we had to sacrifice some of these bands and just attend the Saturday instead (with Young Gods headlining of course).

We made our way from the centre of Bologna in a taxi towards the venue, and it appeared it was purposely out of screaming distance from the historic popular tourist areas as we travelled through maze-like grids of industrial estates eventually pulling up outside a standard industrial estate unit “Zona Roveri”. This place looked like any other industrial unit but once you walked inside, the place was an established large music venue with all the trimmings with excellent sound quality. 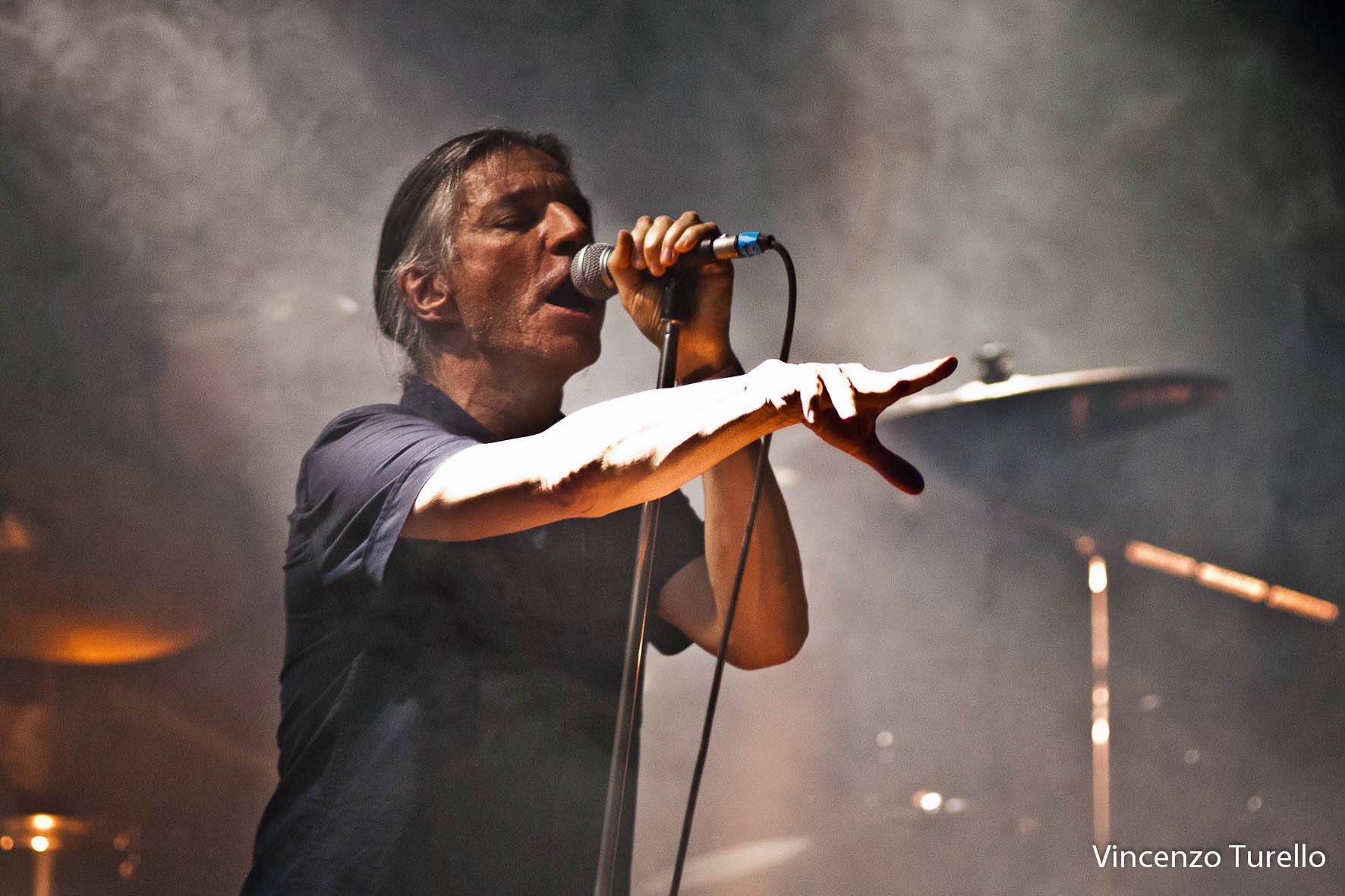 Shortly after midnight, The Young Gods [pic above by Vincenzo Turello] took to the stage and started off their set with a couple of new instrumental tracks with frontman Franz Treichler on guitar sliding and sustaining riffs whilst Cesare Pizzi controlled the backline of bass, pads and noises on his sampler. The 3rd member being the very talented Bernard Trontin on drums with his phenomenal ability to keep time with Cesare’s samples and rhythms nodding and glancing over at each other for confirmation of the next break or change.
With their set still proud with tracks off their first two albums, we we’re then treated to old classics including Fais La Mouette with its combination of rock guitar pounds and bird noises (it’s actually a lot better than that sounds), The Irrtum Boys, the very popular Jimmy, before taking us back to that seminal ground-breaking “TV Sky” album with The Night Dance and Skinflowers.
With such an extensive back catalogue, I didn’t know what to expect next but the Gods stayed true to their first 2 albums playing a few more off them including the thundering relentless Envoyé which was a big crowd pleaser. I was now very happy and in a “Young Gods Coma” as well as having a full day’s ale in me, so my memory of the final tracks are a little sketchy. Highlights though were one of my favourite tracks off their “Only Heaven” album  Kissing the Sun and the thumping L’Amourir which is a regular on my music playlist. If I remember right, they ended their set with another new song and after the cheers and applause had died down, the band bid us their farewells climaxing in Cesare Pizzi giving us a speech in Italian which went down very well with the locals. I can only imagine he was thanking us for our support over the years. As they walked off the stage, the intro synth stabs started up to “Killing Joke’s Requiem which was a very fitting song to play to end this gig. Maybe this was the last time I’ll see them, maybe not, until next time, au revoir & ciao to the wonderful Young Gods.

We got a Gran Turismo taxi ride back to the hotel…