Tales of the Unexpected! So I grabbed a last minute offer to catch the Skids play a Chester Live Rooms show. So last minute I didn’t even have a chance to get train beers (which is the norm for any journey over 25 minutes long). So rushed was I that also forgot to take the “hip flask of doom” (long story). As a result this proved to be a first sober gig experience when I hadn’t driven!

Talking of firsts, I never got to see these legendary Scottish punks first time around but (I think) I caught them play at Rebellion Punk Festival in Blackpool last August (I think)! Loved this band as a kid, their brilliant early singles are among my favourite vinyls.
It’s a short walk from station to the Live Rooms and I arrived with time to spare. I always like to watch support acts but on this occasion I guess I should have nipped to Bargain Booze and boarded a later train! A handful of people had gathered in the venue for Ryuko. A guitar and bass duo from Chester with a drum beat via guitarist’s pedals which seemed to be erratic to say the least. It was a poor disjointed performance with gruff vocals not aided by the sound levels not being sorted. It felt like we were at a band rehearsal and the drummer couldn’t be arsed to come. The singer using lyric sheets just added to the shambles. All of which is a shame really when we know so many decent bands in N. Wales that would of relished the opportunity. I retired to the back room where more people were watching Argentina getting beat by Croatia.

To the main event….. It’s rare that I actually lower the average age in a room but tonight I think it was achieved! This sizable crowd eagerly awaited their heroes and there was a great atmosphere and buzz in the air as the Skids took to the stage. Instantly owning that stage, the six of them were firing on all cylinders. They plough headlong into a set that has everything. The energy and enthusiasm hasn’t waned and is truly infectious. Classics such as ‘Yankee Dollar’ and ‘Into The Valley’ are real crowd pleasers with us all belting the words back at them and dancing like idiots. None of our moves were in the same league as Mr. Jobsons, his aggressive arm flailing and kicks wouldn’t have been out of place at the straight edge gigs I attend and love so much!
Insight into the bands history was given between songs and delivered with great humour. The thing that stood out was their passion for what they do and belief in where they are going as a modern force. Make no mistake this is NOT a “nostalgia” band looking for easy money. Some of this newer material was played and was spot on. We have a special mention of the late, great Stuart Adamson before the realisation that me and Mr. Jobson share the same favourite Skids song in “Masquerade”. We all left happy after a rousing encore.
As I awaited my train home to sunny Rhyl I got chatting to a man on the platform who had a bag full of records that the band signed for him. Ever so slightly jealous I hadn’t done the same but good on you Colin!
Up the punks. Long live the Skids… 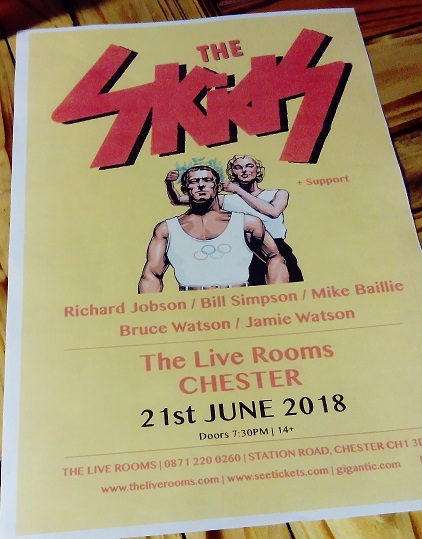