Jeez, the Gene Pool wasn’t very kind to Wigan was it..? Ha ha… Scanning the venue as everyone got more and more (sa)lubricated it felt more like an open day at Rampton Hospital…!
Joking aside, what was evident was the lack of youngsters at this well attended gig… All the mohicans, fishnets, zombies and studded leather jackets were out, looking like a GBH album cover, but the huge majority were around at punk’s year zero over 40 years ago… This of course doesn’t bode well for the punk rock future (of Wigan anyway) with no youngsters coming through. Or perhaps it was just the bands they didn’t like and decided to stay at home…

Those bands in question were definitely from that old skool of punk rock in noise, attitude, regalia and age… Things kicked off with Potential Victims (pic above), a band of refugees who’ve managed to escape from war torn Rochdale for the evening. My incredible website informs me I’ve seen this bedraggled mob before (at Rebellion in 2013) and you soon realise there’s more to them than just banging out three chords. Dual guitars are playing neat riffs and cool licks while the concentration of the bassist is only lacking his tongue sticking out (like a kid joining the dots), all backed by a drubbing drummer. Subjects are typically of the nonconformist type with the genre that we choose to follow.
All good stuff… 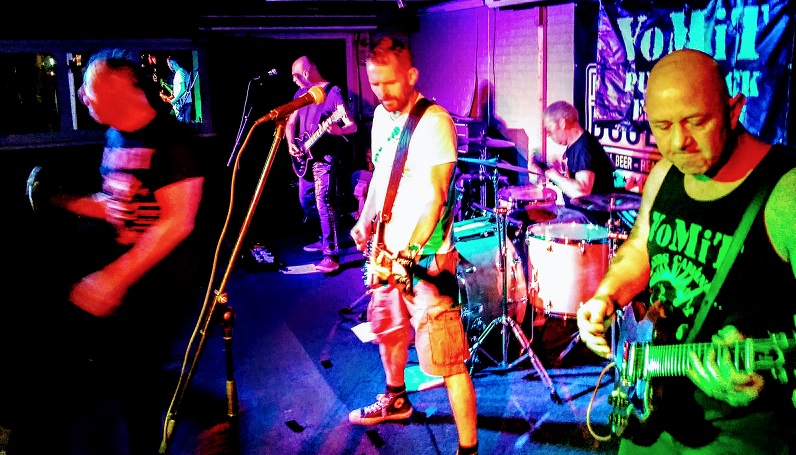 There’s a party atmosphere going on, and perhaps I’m missing the trick being the only sober person in Wigan… It’s no different to a children’s party, (only minus the bouncy castle), lots of selfies being taken, lashings of ginger beer and smiles all round.
Local anti-heroes Vomit are up next. Their backdrop boasts they’ve been treading the boards since 1977, and judging from tonight’s performance this shows no sign of abating. Like Potential Victims, they’re prodding their fingers at the establishment and those who tow the line, but with a bit more tempo. A shouty singer full of energy and some really hooky tunes in there too like Breakaway and Dirty Toys and a song that goes, ‘You’ll never see a punk on Question Time.’

I’ve seen the name Hung Like Hanratty bandied around for years without actually encountering them, and on inspection I guess it’s because they don’t mix in the circles of the bands I’m used to seeing.
‘Good evening, we’re called Hung Like Hanratty and we sing about what you really think.’
Well… yes and no… It’s incredibly un-PC in this modern world where every sanctimonious fucker gets offended on behalf of other fuckers that they don’t know. So tonight’s prop filled set was taken the way it was intended… As fun… Like Grant Sharkey said, ‘You can only take offence, I can’t give it.’ This is so true, and when you see the papers and news full of someone being offended by something someone Tweeted in 1974 you know that one day there’s gonna be a huge reaction to it all, and probably not for the better.
Anyway, this is punk rock panto, like a watered down Macc Lads with power chords. It’s all good humoured and the half male / half female crowd enjoyed it immensely for what it was.