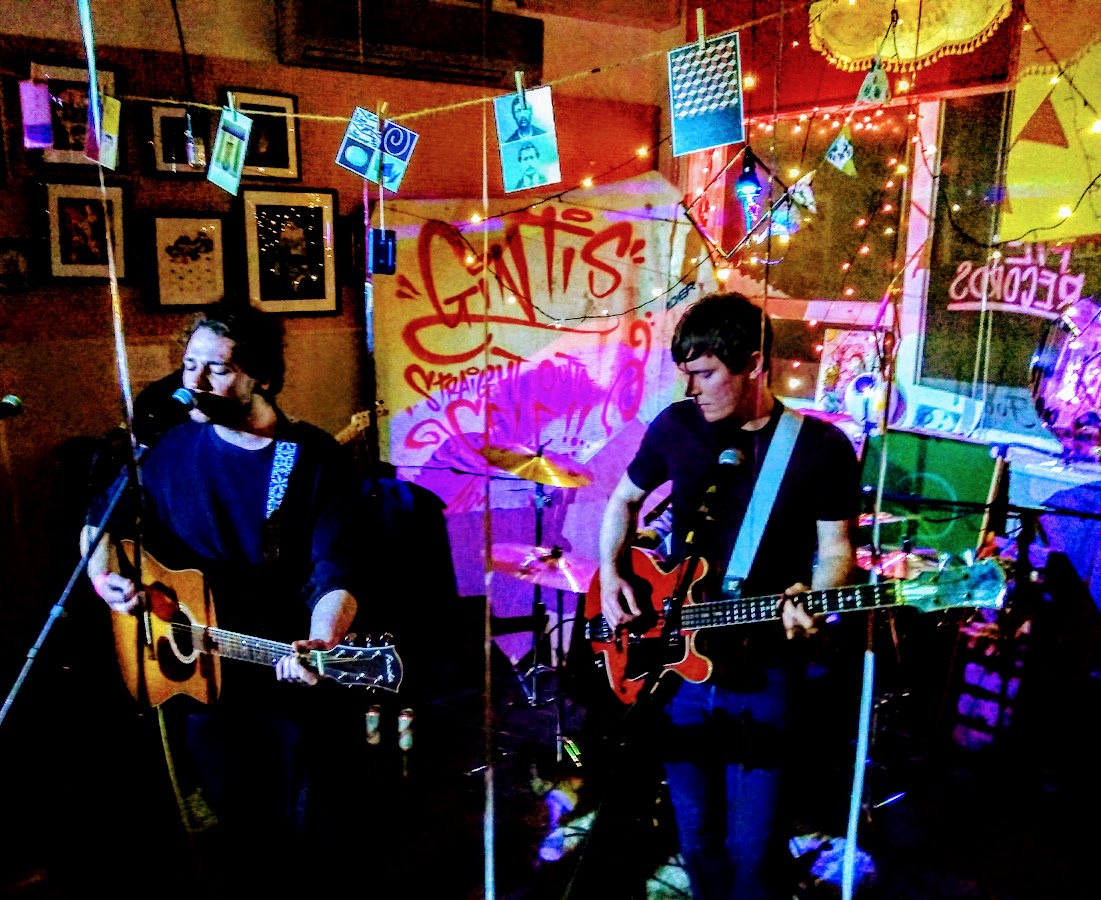 Having seen Gintis play 30 times, you’d have thought that I have little to say about them anymore. Steve Sync and myself took the short trip to the excellent Pie Records in Rhos-On-Sea to witness a rare ‘home town’ gig. I say home town as (Mo Salah lookalike) Carl Gintis noted, it’s difficult to pinpoint their base anymore… I guess the excellent backdrop could lay claim with the slogan ‘Gintis – Straight Outta Gele.’ 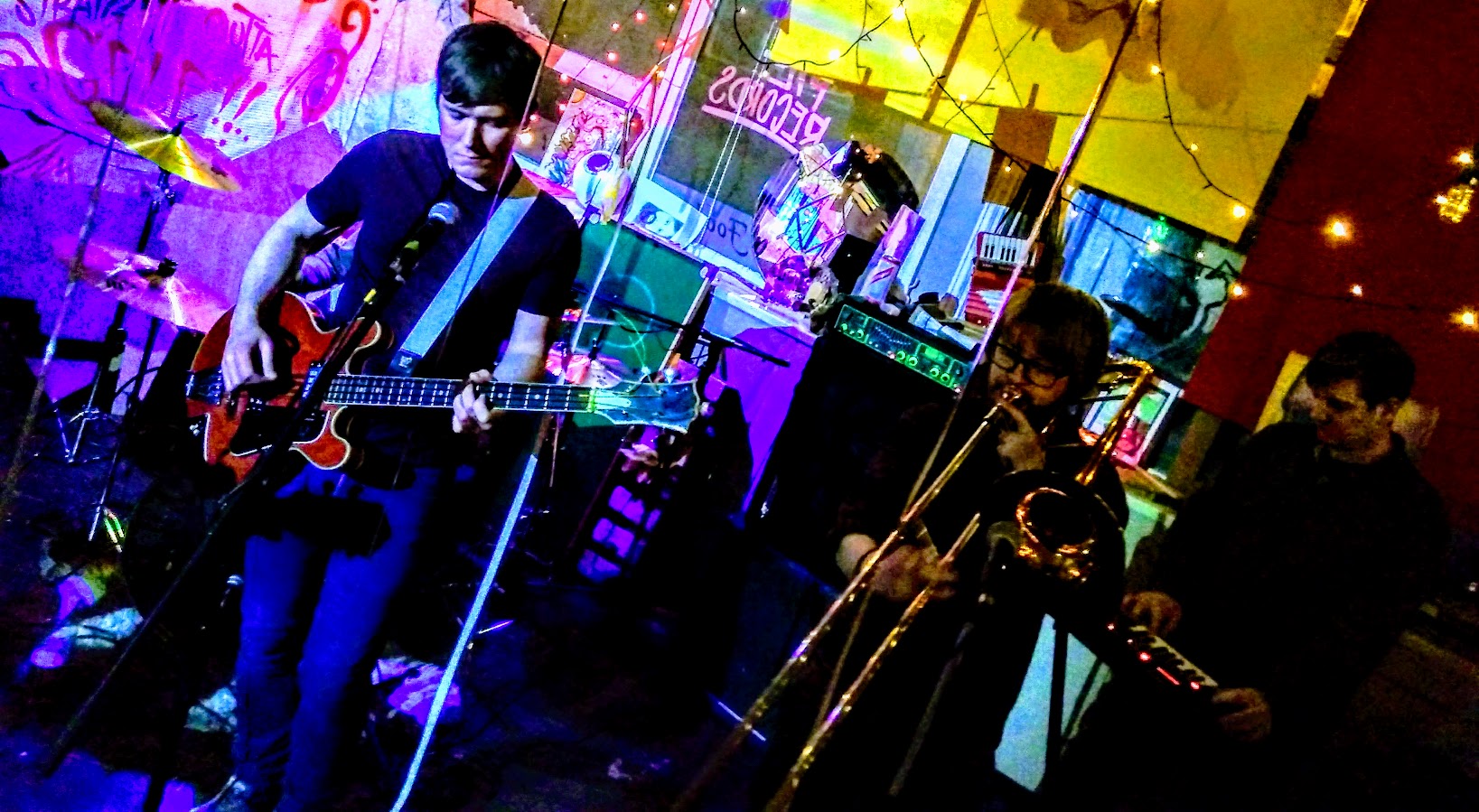 Pie Records is such a great place, so good, that the council will do everything in their power to close it down. I guess Pie don’t help themselves by not getting the acts to start as soon as the music licence permits it and Trading Standards are stood outside waiting for live music to be playing a minute past the 9pm curfew. You can imagine the job description – ‘Jobsworth killjoy who takes pleasure out of spoiling the fun of others.’ 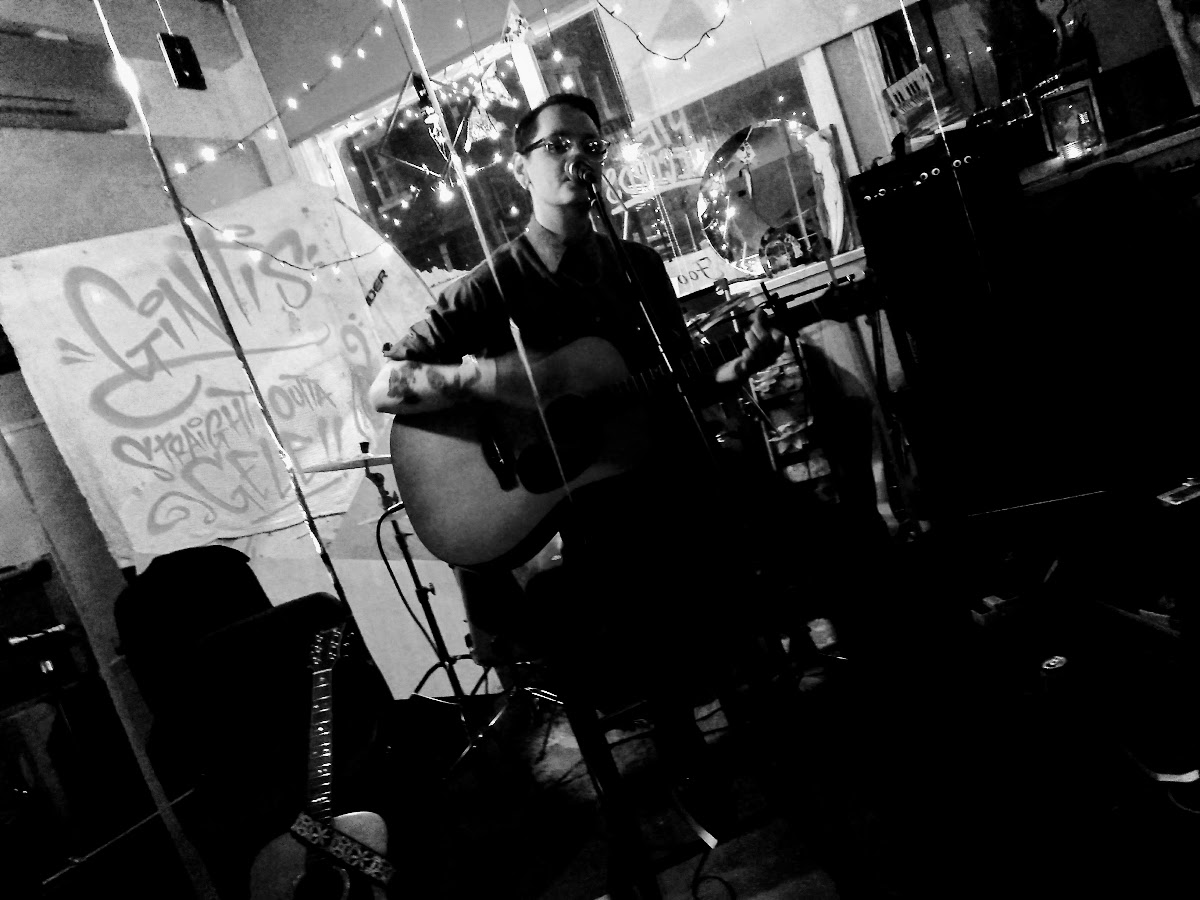 Having lived in the bright lights of Leeds for nine years, Saint Stevie has come home (to Dwygyfylchi) and wastes no time in plying his trade. His lo-fi unpolished albums ‘Bathroom Tapes’ (1+2) are a haphazard collection of oddments… And this is exactly how his stage show is… Off key, a bit drunk and plain weird, Saint Stevie won the large crowd over with quirky aplomb. A little Sparklehorse-ish at times, and when he got angry he’d be rising off his stool, arcing and screaming… Yeah good unclean fun. (bandcamp)

The aforementioned Ste Sync and myself were at Bar Blu in Rhyl in April 2003, when these pricks got up on stage and declared they were the best band we were ever going to see… They were pretty shit, but possessed a certain charm, and beneath the songs that were out of tune, out of time and out of luck there were shades of brilliance. Carl, Joe and Dave Gintis remain from that gig 15 years ago, Kyle was there too (with his band Jives Room), Rob has been bassist for many years and sitting in for the paternal Joe on drums tonight is the multi-talented Jules (Wobbly Hearts). 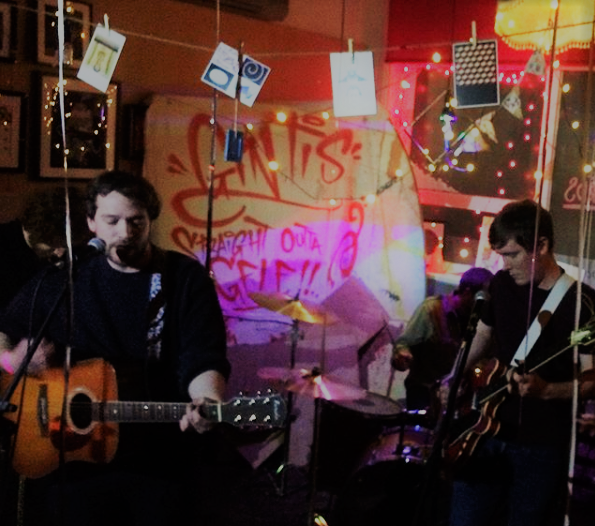 Cream always rises to the top, and over the years Gintis have produced some absolutely astounding songs, Philisophical Transactions Of A Disappointed Physicist and Wonderful Show are two that I rate right up there with my favourites of all time. The end of 2017 saw another added to that list, the ‘comeback’ single Dennis, released by Popty-Ping Records – an absolute masterpiece in songwriting.

There’s a lot of people here, there’s a buzz about Gintis these days, 6Music play them, they fill venues in Liverpool and Manchester, they’re featured in magazines. They play us a set of mainly new material, everyone is paying attention, Gintis are on a level way above the ramshackle drunken gigs of old; everyone is smiling, head-nodding and toe-tapping. The addition of Niall on trombone adds a meandering layer that compliments the songs… Today is the day when all the rain in Manchester and the jobsworths from trading standards couldn’t wipe the smiles from our stupid faces. Yeah, the gig was pulled with two songs left to go, leaving the Trading Standards officer able to go home with a hard-on, satisfied he can beat his wife knowing this position of power is his to own.

With Pie still a-buzz with people, Carl got up with his acoustic guitar, unplugged and un-mic’d and sang Now I Know – the Gintis staple show-stopper, a song about their group of friends, a song mentioned in all their gig reviews… Please Gintis, don’t ever die… Because we love you alive…