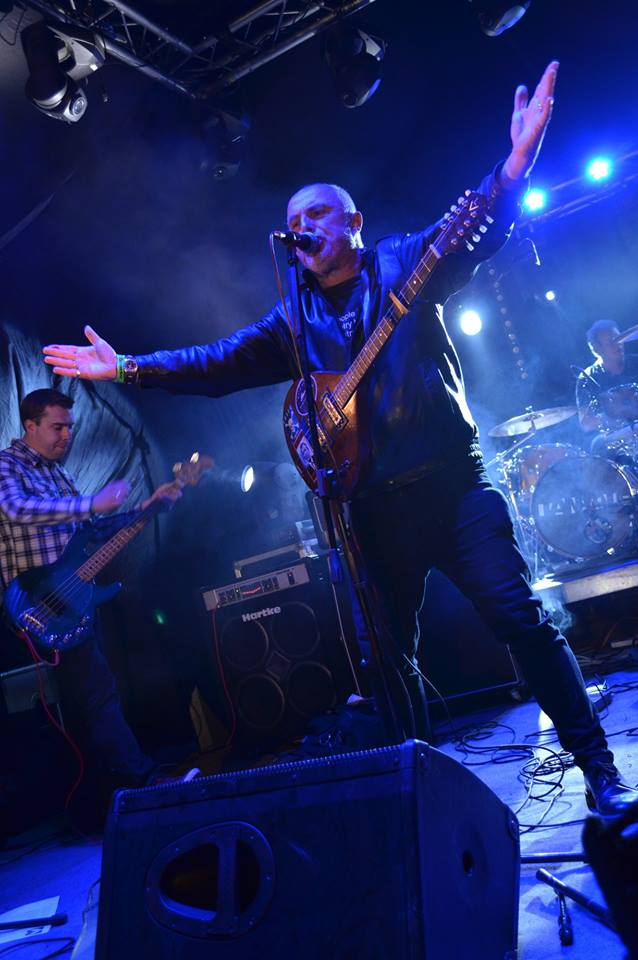 A sparse but enthusiastic crowd of either the curious or the converted gathered at the rather wonderful real ale community Welsh centre Saith Seren in the heart of Wrexham.
Since 1980 Attila The Stockbroker has banged out poetry to those who don’t read poetry and along with tireless activism has completed 1000s of gigs all over the world.

His passionate, uncompromising, funny and brutally straightforward poems take on football, politics, cancer, punk and even his love hate relationship with his step dad here. Attila has a connection with Wrexham Football Club going back to the benefit gigs he did for the Wrexham supporters trust back in the day.

I first came to hear about Attila when I saw the Newtown Neurotics whom he often opened for in the eighties and it was good to hear that the crowd funded documentary about the band has reached its target just a few days before this gig.
Music is as much a part of the Attila armoury as words, and with Barnstormer he fuses the worlds of traditional English folk music with the power of punk rock.

A description not used lightly. They literally don’t sound like anyone else. Barnstormer aim to do with early music and punk what The Pogues did with Irish music and punk. Attila describes their sound as ‘Roundhead Renaissancecore and Baroque ‘n’ Roll’.

A strange mix of instruments stand in front of the stage, which we later find out are called crumhorns, and include five different recorders as well as violin, viola and mandola.
I still have bad dreams about recorder practice in school however this noise was easier on my ears with the violin and guitar and drums merging into a Velvet Underground vibe at some points.

You need to know your history for the songs but thankfully Attila explains this period for the ignorant like myself with tales of the end of the English Civil War and the execution of Charles I. Barnstormer’s songs are about the Diggers, the Levellers, the Ranters and their leader Abiezer Coppe, There is an epic piece about the narrow escape of Charles II after the Battle of Worcester in 1651 in a coal boat which sailed from the end of Attila’s road in Shoreham Port near Brighton. (If he’d been caught, we’d probably be spending more money on the NHS now instead of the Royal Family).

And all with an eye on what‘s happening now, which is essential. Attila has written a couple of very modern early music songs too, such as a tune about a visionary with a beard and the initials JC.
Its not all plain sailing as Attila’s viola breaks down during the set and we hear sad news about the bass player who was too unwell to attend however all in all a uplifting night with one too many pint of mead.

A shout to Marc Jones, the owner of Saith Seren for organising the event and looking after the band who attended the home game before the event as well.