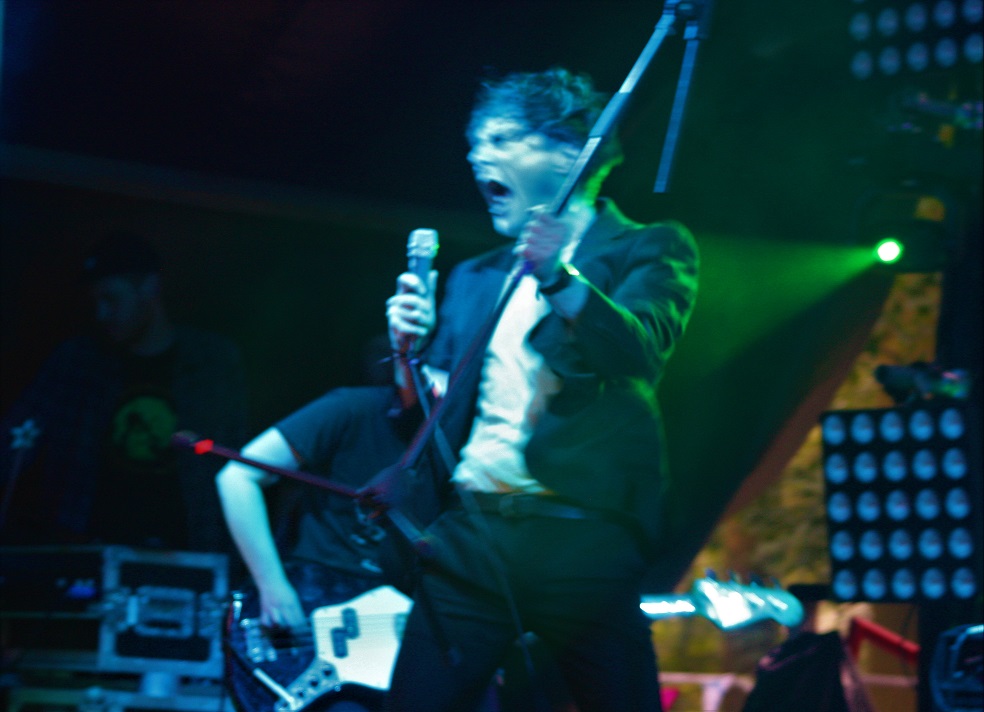 Last year at Bearded Theory I was virtually camped in the Convoy Cabaret and The Something Else Tea Tents – this year they were hardly skitted, such is the diversity of this festival (or myself perhaps – ha!). The line-up is almost irrelevant, it’s the company you keep and your frame of mind. Despite being a comparatively small event, you can still see a completely different set of bands to other people. This brings great topics and tales to tell on the chat forums post-BT. 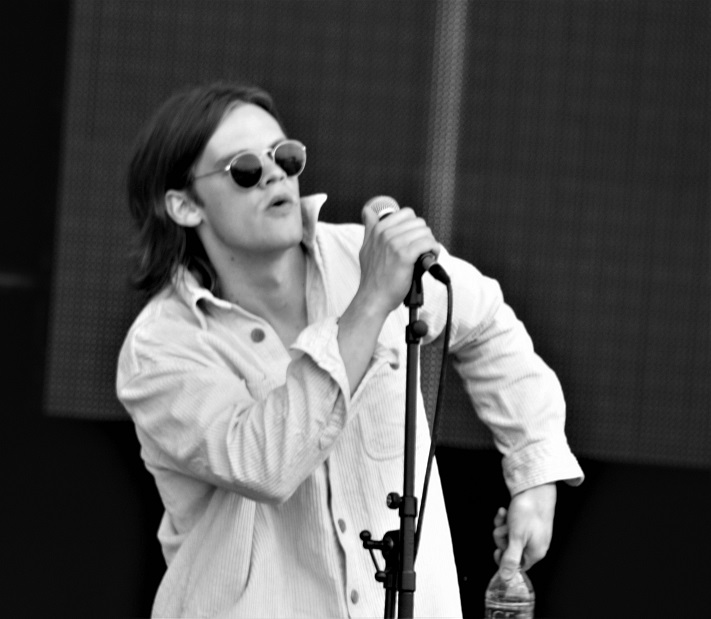 I’m not even sure if the traditional Bonsall Red Barrows or the cyber-drummers took part this year; seeing little evidence by the time we got to the main Pallet Stage to witness Sheafs. They’re from Sheffield and hit the ground running, there’s an instrumental to kick us off then the vocalist, Lawrence Feenstra runs on and takes control… He’s probably a little too enthusiastic for many people’s demeanours at this ungodly hour but the showmanship is top drawer. As a lead singer-strutter Lawrence is absolutely brimming with confidence and has undoubtedly studied The Ladybird Book of Middle-Class Rock God Poses. Initially, my two-word review read: ‘Annoying twat,’ but as their set took hold and I thought back to the dreary uninterested Jesus & Mary Chain performance on Friday, my appreciation for this exuberance grew and grew.
I guess his did too as jumping into the crowd, singing into the hungover faces and a spot of surfing became part of the set and those involved took it all in the correct spirit (he’d have got his head kicked in had this been in Rhyl!!). Sheafs have the songs, the swank and the twattishness to be a big name. 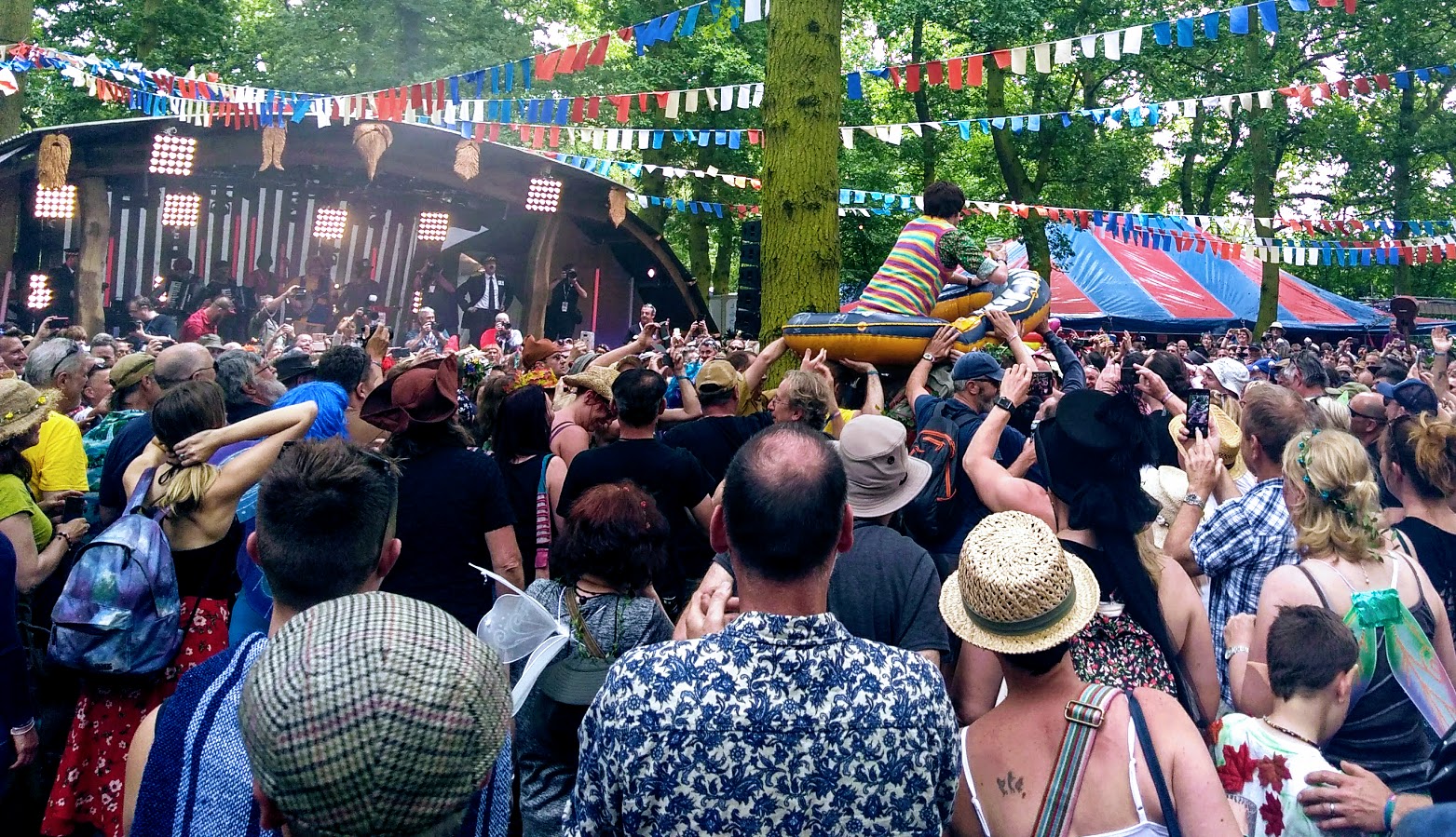 The hype surrounding the Bar Steward Sons Of Val Doonican needed to be checked out, and it seemed the entire festival crowd had crammed into the Woodland Stage area to do just that. Those fortunate to actually get in experienced great humour and entertainment… although, like Sheafs, it did take me a couple of songs to tune into their world and grasp their level. This is where they take on traditional ballads / tunes and turn them into their own; like Lady In Greggs or Cockwombling Song, all very funny and good fun. It all culminated with Scott Doonican surfing the crowd in a rowing boat… As you do… 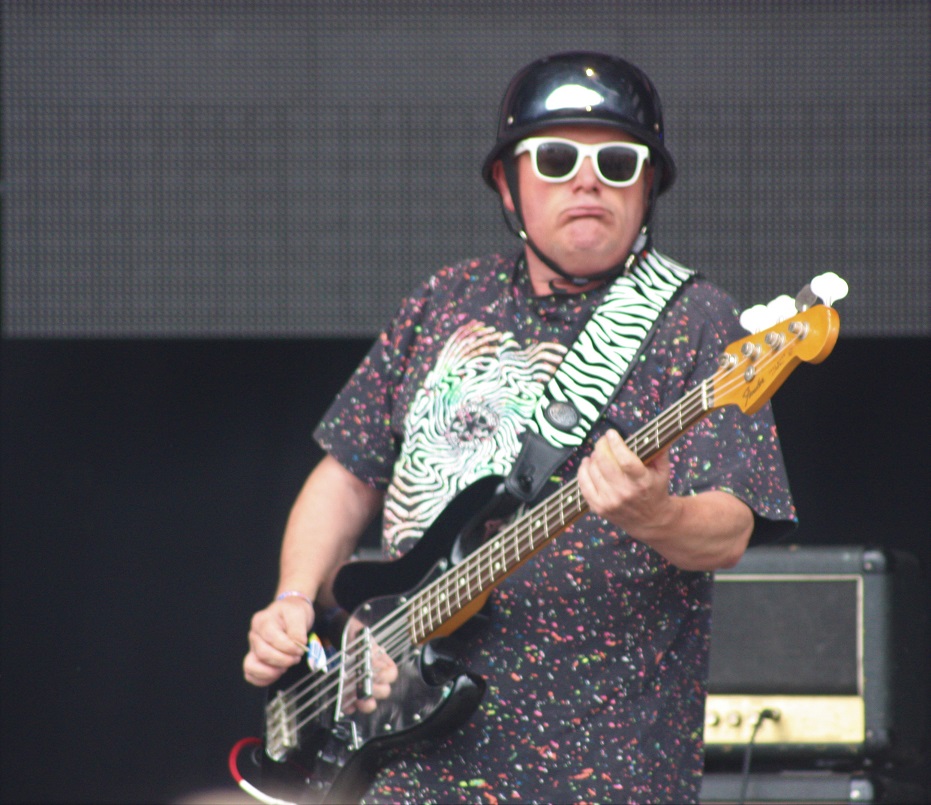 After queuing for what seemed like forever to actually get out of the Woodlands, the opportunity arose to sample the urban bastard grebo blues that Crazyhead have to offer. Having reformed last year, I took little notice of them when they spaffed onto the scene in the late 80s. I favoured their more dirty Gaye Byking neighbours and busied myself by drilling my own holes. Watching Crazyhead here in the (rotting) flesh, I think I enjoyed the performance more than the songs… A rag-taggle ensemble of misfits in top-hats, helmets and Bay City trousers who looked fucked by rock… It was great to watch. 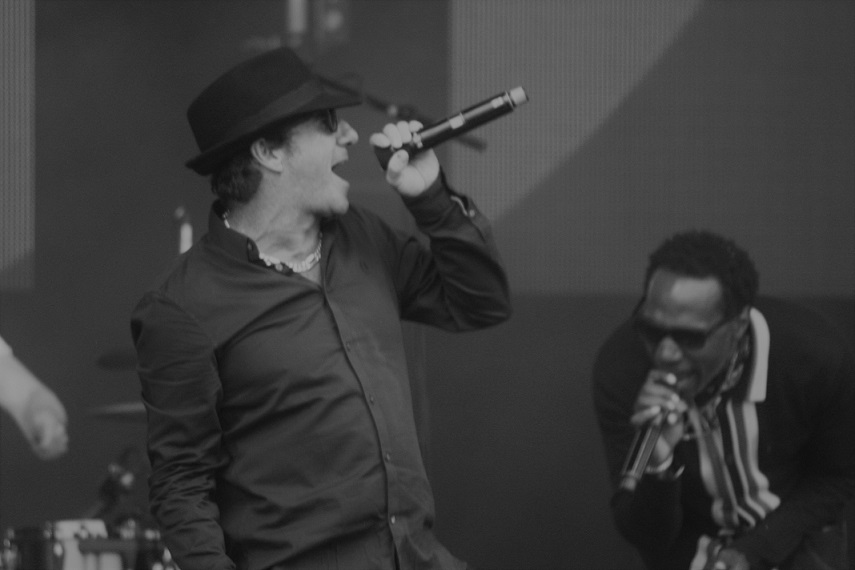 Dub Pistols did the Thursday night, party-night slot in the Maui Waui tent a couple of years ago… It was so packed you could hardly breath… So an invitation brought them back, and onto the main stage. They may have sung There’s Gonna Be A Riot but rather than getting bricked, they were warmly welcomed and they repaid that welcome with a sterling performance. There’s big beat hip-hop sounds that lean heavily in the dub reggae Dreadzone direction and the atmosphere is one of celebration. 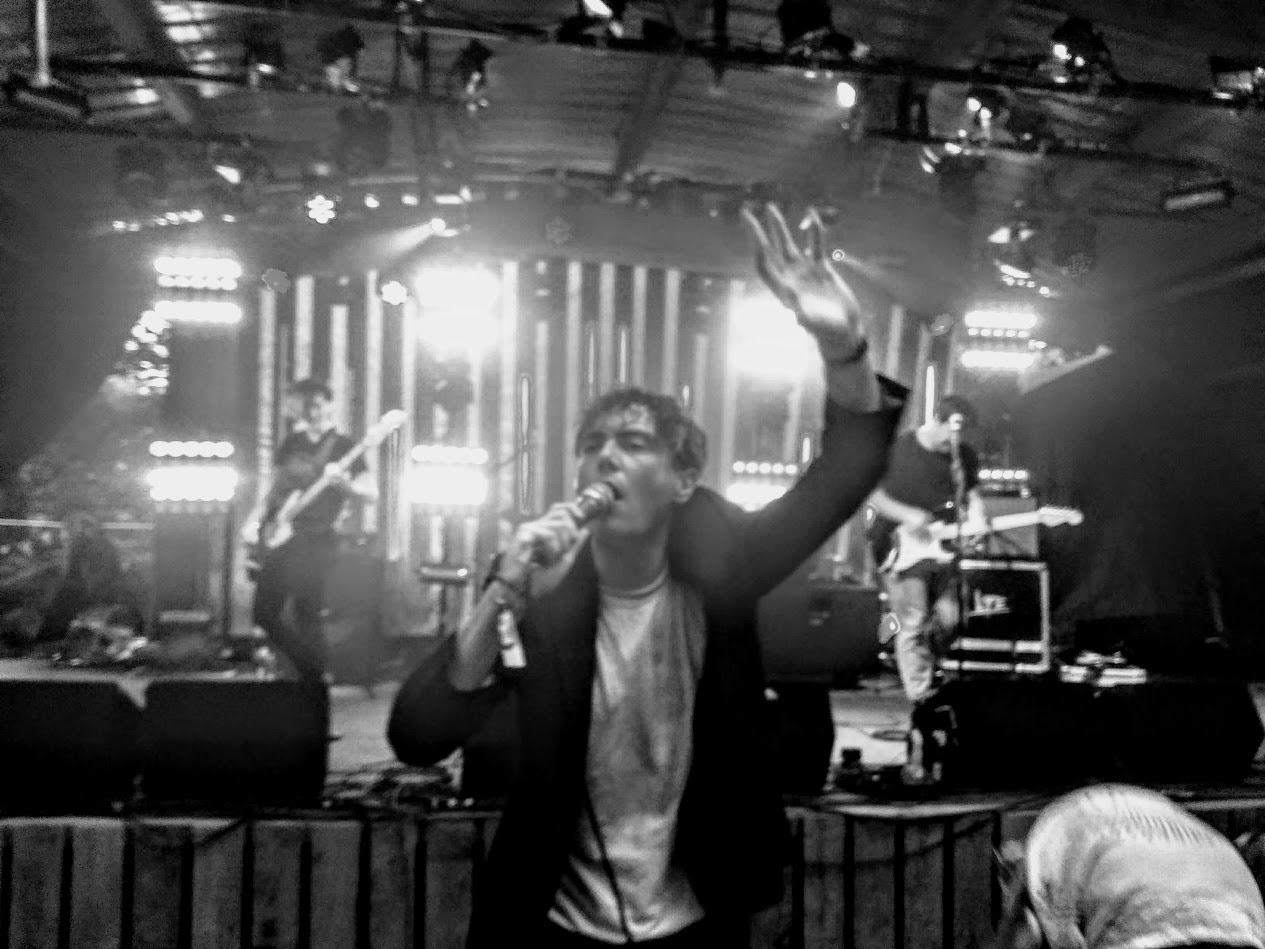 Fatman insisted we saw Life. Life insisted we saw them… Life are more important than Life itself… Their mothers might well suck cocks in Hull, but these kids from that barren east coast will spit and swallow you whole with their DIY punk rock. They’re screaming ‘Fuck you’ at the music industry so you don’t have to with a brazen swagger that’ll leave you lying in ruins. From the opening chord you realise this is the business end of the festival, this where things happen, Life are going to shatter your senses and you’re going to have a complete breakdown, and it’s going to be divine. The singer, Mez is so arrogant, you’d want to punch his lights out and kiss him at the same time… He’s such a wanker… And that’s what makes them great… And the band, of course are equally held in the same esteem. They play a pseudopunk unknown to man… and great bassing by Amy(?) who only joined last week. Probably used before… but this was Life affirming. 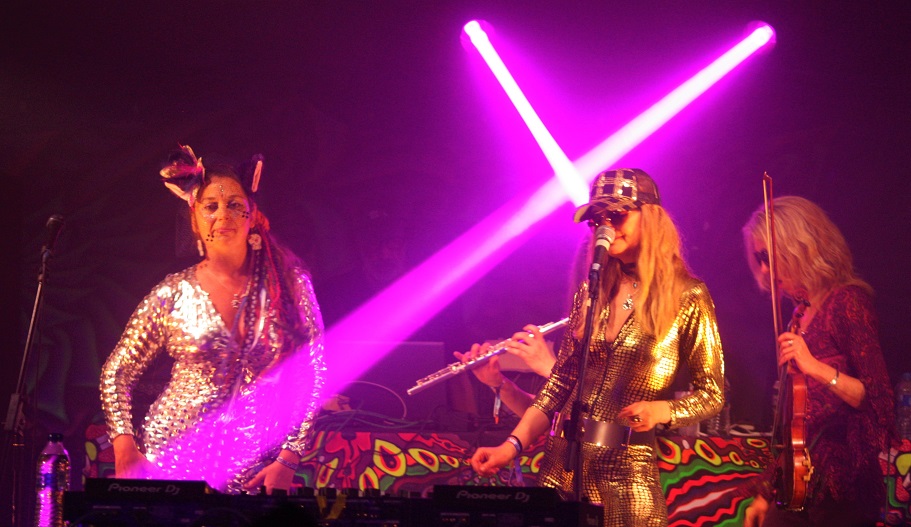 We pitched up at the edge of reality and absorbed Astralasia in the Magical Sounds Tent. It’s busy, people are being taken to a better place. Pat is back on stage in all her golden cat suit glory after a fifteen year hiatus… Great to see a psytrance band rather than some geezer hunched over laptop with one arm in the air pressing Start then Stop… Short of a drummer (which would have been amazing), Astralasia are a guitarist, Flutatious bassist, flutist and violinist, two vocals, that laptop guy and keyboards and it all jams together to make a huge somniferous wall of sound… Apart from the unnecessary 15 minute version of I Feel Love at the end it was all quite beautiful. 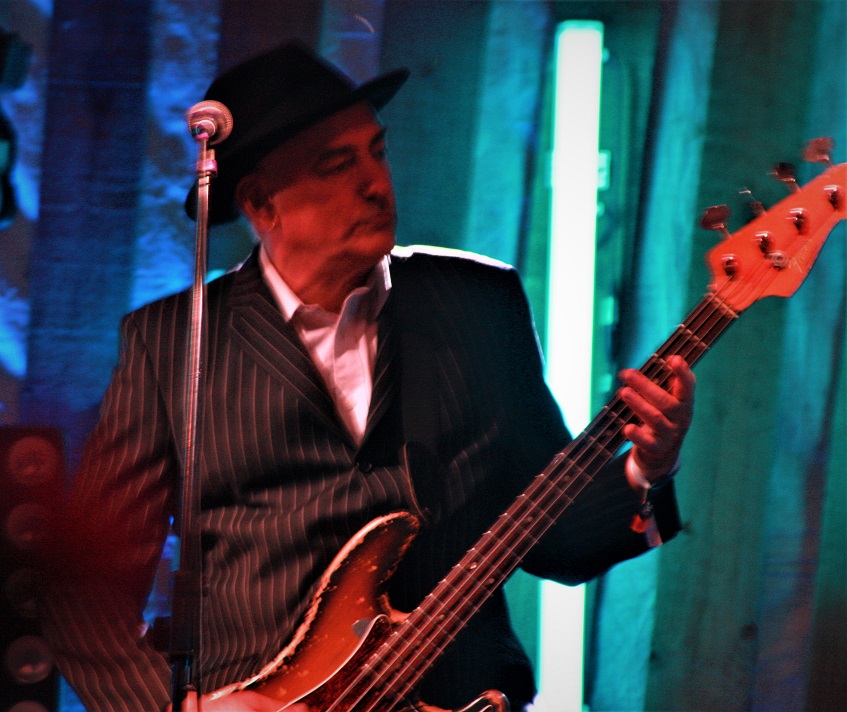 Ruts DC turn out to be our festival farewell and it was a good un. So too thought Swampy, who took to continuously diving through the puddles of thick mud next to us. He was an annoying splattery distraction to the music, but hey, it’s been raining, and this is a festival.
As you’d expect, Ruts DC played a crowd pleasing set based heavily on their early back catalogue. Songs like Something That I Said, SUS, It Was Cold, Staring At The Rude Boys, Jah War you get the drift? Add to these the newer Mighty Soldier and Kill The Pain that would not have caused you to blink if you were told that the late Malcolm Owen had written them. The performance was punchy, robust and Ruts DC were definitely not here to just make up the numbers and take the money and run… Running over their allotted time they ended with Babylon’s Burning and debated at the end whether to break the curfew… They played a verse and chorus of Psychic Attack just to appease the baying crowd…

Thank you Bearded Theory for another great weekend…