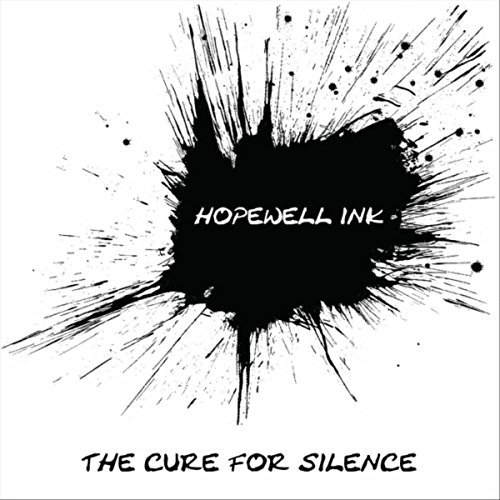 Whether one can honestly refer to all ten tracks on Hopewell Inks’ debut album as songs is debatable. Rather, “The Cure for Silence” is a collection of pieces created by blending the spoken words of Kathy Hopewell with the music and sounds of her partner, David Hopewell.

He himself has referred to what they’ve recorded, and indeed played live throughout North Wales, as “spoken songs…art music…sound art, perhaps?” But does “The Cure for Silence” work as an album; is it something you can put on, play, and listen to?
It’s certainly accessible, despite the unorthodox way it was created. The “lyrics” start out as ten minute free-writing exercises by Kathy, which she then fashions into the words for a piece. David’s music (or sound) is improvised at the compositional stage, and acts as a framework he can alter when playing the pieces live.

The album starts off with the title track; less than a minute and a half of a slow drum beat, accompanied by Kathy reading out a list of cures. The cures for silence, love, cups, cats, clocks, exams, happiness, sorrow, and more are covered in the short piece.
Next up is “Newborough”. Its use of spoken word alongside the harmonium is reminiscent of Ivor Cutler at his eeriest. The piece opens with an environmental soundscape of water and bird song, before Kathy starts to consider the flow of water, of words, of life, and death.
The piece includes a list of random thoughts that happened to pass through Kathy’s mind on one particular walk. Kevin Coyne gets a mention, as does Gun Magazine, Portland cement, corsets, weird fish, and even dishwasher tablets. It’s a random collection, sandwiched between the more philosophical matters of rivers, seas, leaves, and the circle of life.

The strings and softly spoken words on the next track,” To Traverse Happily”, brings to mind the experimental album “I Trawl the Megahertz”, recorded by Prefab Sprout singer/songwriter Paddy McAloon; where extracts of late-night radio shows were backed by soothing orchestral music. “To Traverse Happily” appears to be Kathy’s affirmation of how life is worth living.
Up next is “Hard Heart”, probably the closest thing to a song on the album. The track allows David to show off his skills as musician; it is a Santana-lite groove of smooth funk and soul. Kathy’s delivery is still spoken rather than sung, but it is on “Hard Heart” where you can hear most clearly the ties that bind her words to her partner’s sounds. It is also the one track on the album that passes the “listening to while driving” test.

In “This Area is Under Re-development”, a pliant sapling grows into a great tree, and is eventually felled, while a slide guitar paints the landscape where the tree once stood. It is a beautiful, saddening, and stark picture.
The next track however, “Curled Slug and Scaffolding”, is a full-on cacophony; squelches and crackles, boings, bloops, and blurts explode throughout. The track balances precariously between organic and electronic, and then things get weird.

“Electronic Voice Phenomenon” is inspired by a belief that the voices of spirits can be heard in white noise. Kathy and David whisper prose, which is looped and layered. Witnessed live, the piece is disconcerting, and this crosses over to the album with surprising ease. Whether there are ghosts present on the track, who knows, but listening to this in the dark, through headphones, is not for the feint hearted.

“Ticking” starts with a tick. Is it water dripping? Or is it “Angela Carter’s fingernails on a radiator”? It could even be “the crocodile in Peter Pan” for all we know. Whatever the ticking was, Kathy Hopewell wrote about it, and David Hopewell created sounds for it; and all so you can listen to it. Is it a song? No, not exactly. Does it work? Yes.
“Still Life with Old Shoe” recounts random moments, tells secret stories, looks at the roots of trees and the movements of people, while fuzzy guitars stroke in the background. The penultimate track on this album questions what we should do with our lives, whereas the last track, “Heaven”, examines what might happen when our time on this plane of existence comes to an end.

In the same way that Neil Gaiman’s “Sandman” comic books illustrate how we can look upon death with affection, Hopewell’s heaven doesn’t sound all that bad. Interspersing text from the Bible with a “Report on Heaven”, along with personal prose, the track ends the album in the way one would hope to end one’s life; calm and yet upbeat at the same time.

If there is room in your album collection for ten “spoken songs”, or some “sound art”, then “The Cure for Silence” fits the bill perfectly. Unconventional but accessible, this album is ideal for those moments when you have nothing better to do than listen to something. Store it next to your ambient Brian Eno album, or your Captain Beefheart box-set, and “The Cure for Silence” will feel totally at home, I’m sure.