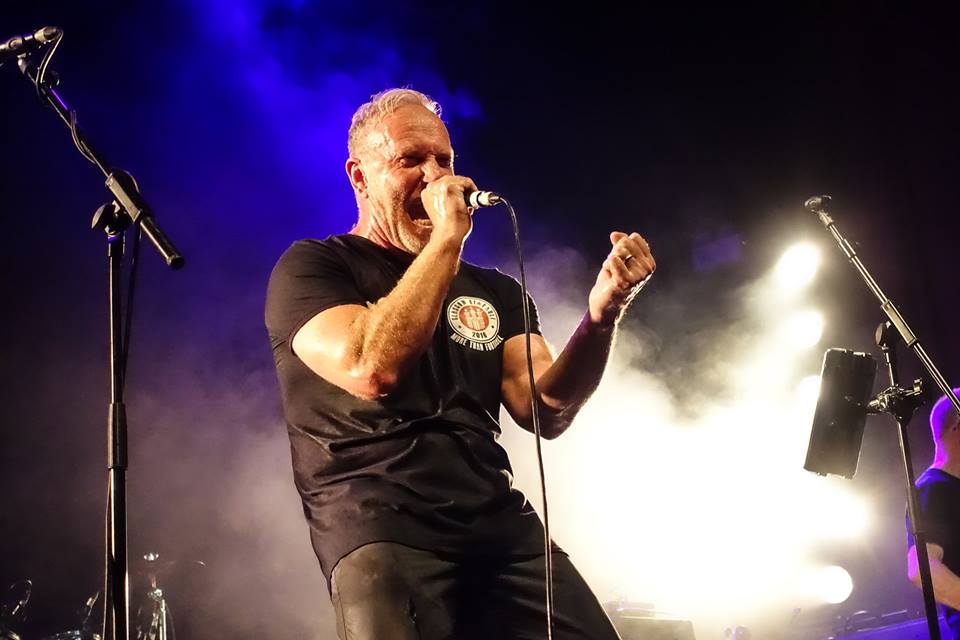 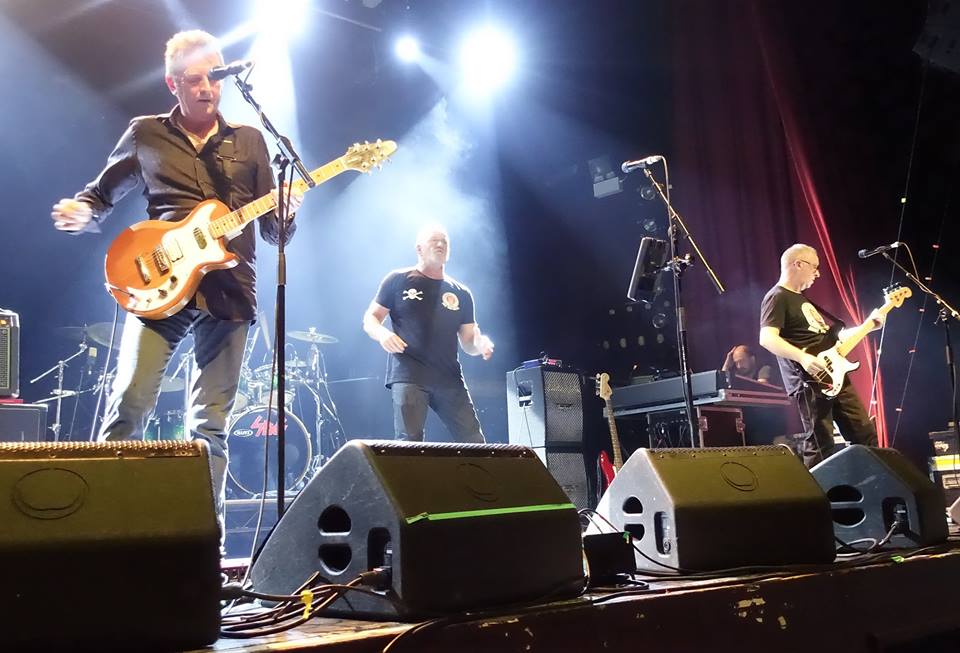 For many the Skids were the best punk band to emerge from Scotland, Richard Jobson was just 16 when he joined up with Stuart Adamson, Bill Simpson & Tam Kellichan, the band had a loyal and frenetic following, the gigs were loud, sweaty and energetic. They cut their own single ‘Charles’ on their own label ‘No Bad’ records (Scottish for not bad!) which was picked up by John Peel then lead to sessions on his show.
Virgin Records signed the band off the back of this and they recorded their brilliant debut album ‘Scared To Dance’. This album without doubt is one of the finest ever guitar based records ever recorded much owing to the genius of the now sadly lost Stuart Adamson who later gained international fame with Big Country.
It was the 2nd single from the album ‘Into The Valley’ which launched the band into millions of living rooms across the country when it crashed on to Top Of The Pops and a million kids including me mimicked the famous Richard Jobson kick dancing.

More success followed with ‘Masquerade’ & ‘The Saints Are Coming’ (the latter later covered by U2 & Green Day). By the time the 2nd album ‘Days In Europa’ was released original drummer Tam had left the band and was temporarily replaced by Rusty Egan later of Visage & Blitz Club fame, the album spawned further singles success with ‘Charade’, ‘Animation’ & ‘Working For The Yankee Dollar’. The 3rd album ‘The Absolute Game’ brought about more line up changes with Russell Webb replacing Bill Simpson on bass & Mike Baille taking the drum stool full time. The single ‘Circus Games’ was a hit but follow ups ‘Goodbye Civilian’ & ‘A Woman In Winter’ didn’t fare as well. I’m not sure of the exact history at this point but Stuart left soon after recording started on the 4th album ‘Joy’ to form Big Country. Richard & Russell finished the album but it was a huge move away from the original sound of the band, for a lot of people it was like Marmite… you either loved it or hated it. The Skids officially disbanded shortly after although Richard and Russell stayed together forming The Armoury Show. 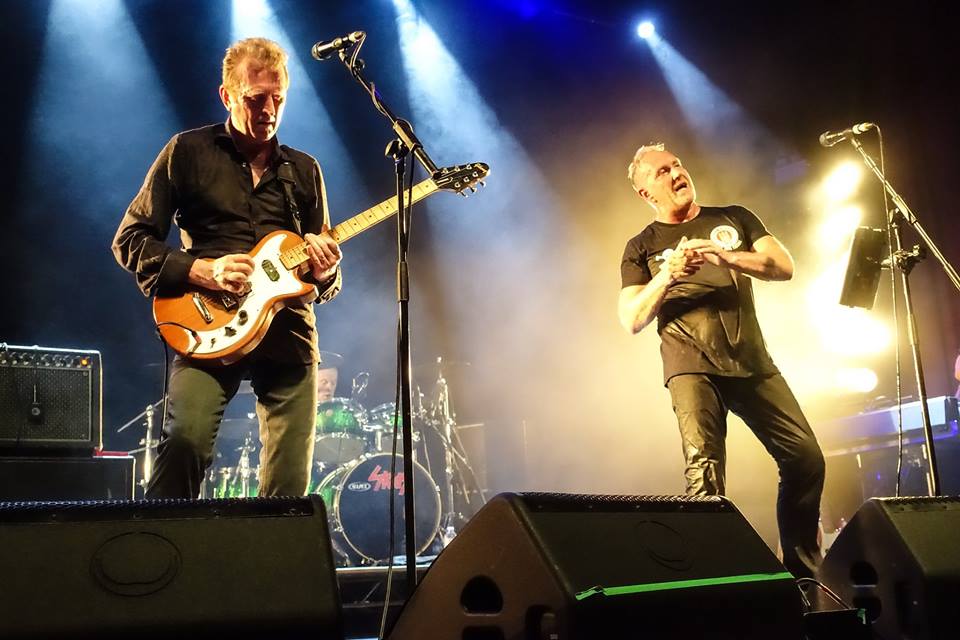 It would be 30 years before The Skids played live again, this happened in 2007 when they played ‘T In The Park’ with the ‘Watsons’ Bruce & son Jamie filling the considerable void left by Stuart Adamson. They played only a handful of shows in Scotland, they did the same again in 2010. Fast forward to 2017, the band like many others these days announced via ‘Pledge Music’ that they would not only be doing a full UK Tour but also recording a new album ‘Burning Cities’.

I caught them in Manchester last nite and they were on fire, the Watsons play Stuarts parts with precision, Bill the original bass player is back and what can you say about Richard Jobson, the man oozes presence & passion, he still can’t dance and he doesn’t care. He’s having a blast (his words). We got an hour and a half or pure non-stop stomping Skids anthems one after another delivered with astonishing energy! They also played one track from the forthcoming album ‘World On Fire’ which sat very well alongside the known hits. The band ended with ‘TV Stars’ the infamous B-Side of ‘Into The Valley’ which name checks various TV Stars with a chorus paying homage to ‘Albert Tatlock’, it’s a song Jobson hates and he makes no secret of it as one punter found out when he shouted out for poor old Albert after about 3 songs and Richard threatened to jump off the stage and shove his microphone well….u know where. Later when I met him we were laughing about it, Richard was saying he only likes the music that “meant something” and he’s right, the music does mean something and it still holds up today 40 years on, The Ritz was shook to it’s core!

The band are on tour across the country now until January 2018, seriously, catch them if u can but don’t dare shout ‘Albert Tatlock’ or that microphone…….U have been warned! 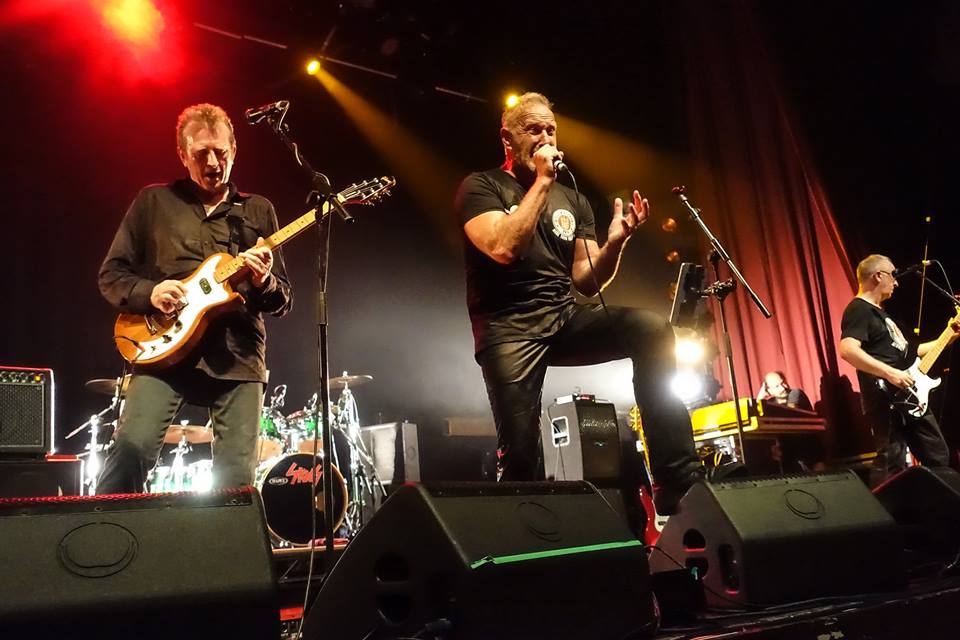