It was a case of being in Barca when Peter Hook & The Light were playing, rather than travelling here to see them. Hooky has been milking the arse out of this for years now, and more power to him for doing so. It’s supply and demand and the demand by all accounts is still there in abundance.
Touring both ‘Substance’ albums by New Order and Joy Division guarantees the audience a greatest hits set (or sets).
We queued in the pouring Spanish November rain, as it seemed EVERYONE brought a coat and needed to dispatch it in the cloakroom, hence stemming  the flow. Steve Sync and myself eventually got into this great little venue and the band are already playing Everything’s Gone Green and the place is packed to the rafters.
Sala Apolo is almost a carbon square copy of The Ritz in Manchester (but with the bar on the opposite side). 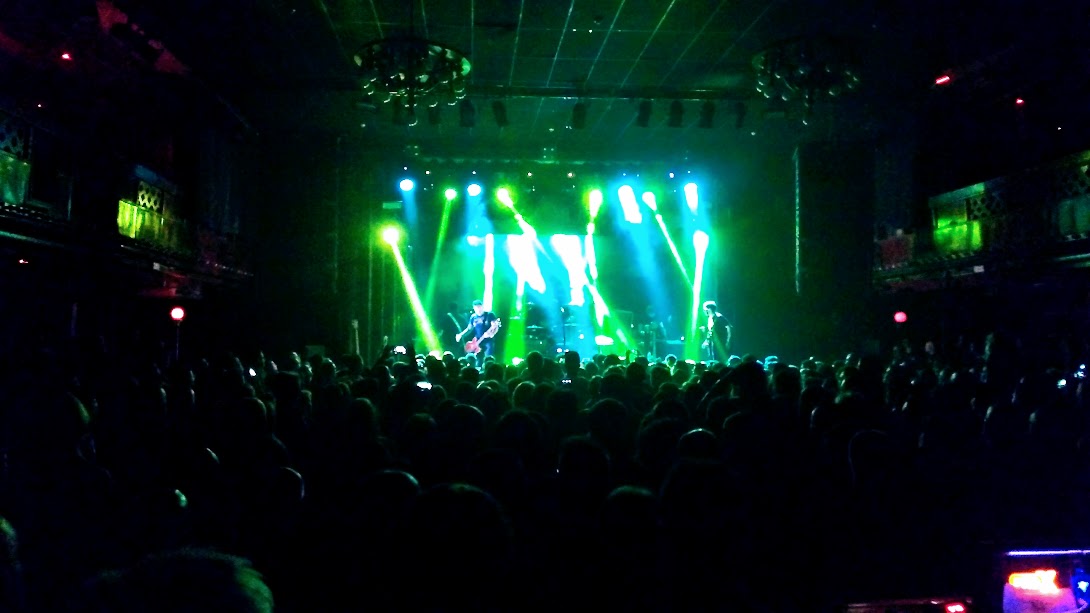 Unlike Steve, I never really liked New Order, even when it was trendy to like them. My 12″ copy of Blue Monday was bought on account of hearing the then innovative track courtesy of John Peel. I even deliberately avoided seeing their set at Festival No6 back in 2012. Tonight’s opening hour of New Order songs cemented my negative approach. The crowd sang along, but as a bystander I found more comfort people watching. The Blue Monday performance was virtually all a backing track (too quiet by all accounts) as the band looked on. Bizarre Love Triangle must have some Spanish connection; maybe a big hit here or used in a TV ad or something as the place went ape to this one!

Peter Hook is a larger than life character and he fills the stage. Ably back by his band and relinquishing a lot of that trademark bass playing to his son Jack, Hooky displayed at times why he is a great bassist and not a singer.

Negatives aside, this was a great performance by a band who have honed their craft by endless touring, and again, never being a huge Joy Division fan, there’s enough substance in the second set to keep me on my toes.
Warsaw kicks off this second set and we are at the business end of the night. The crowd ramp it up too and Barcelona is bouncing. Digital, Transmission. She’s Lost Control and the haunting sadness of Atmosphere send tingles down the spine. I was half expecting black ‘n’ white slo-mo Tellytubbies to appear during Atmosphere (now that would’ve been something!) – this set ends with Love Will Tear Us Apart and up goes a football terrace chant of the hookline.

Two hours in and there’s still a third set to go… They come back and play Doubts Even Here (New Order) and what transpires to be another 35 minutes, we leave it for the hardcore, suitably stuffed and satisfied.

Ironically, with two members of Monaco in the band, I found myself humming ‘What do you want from me’ as we sauntered along the Metro…