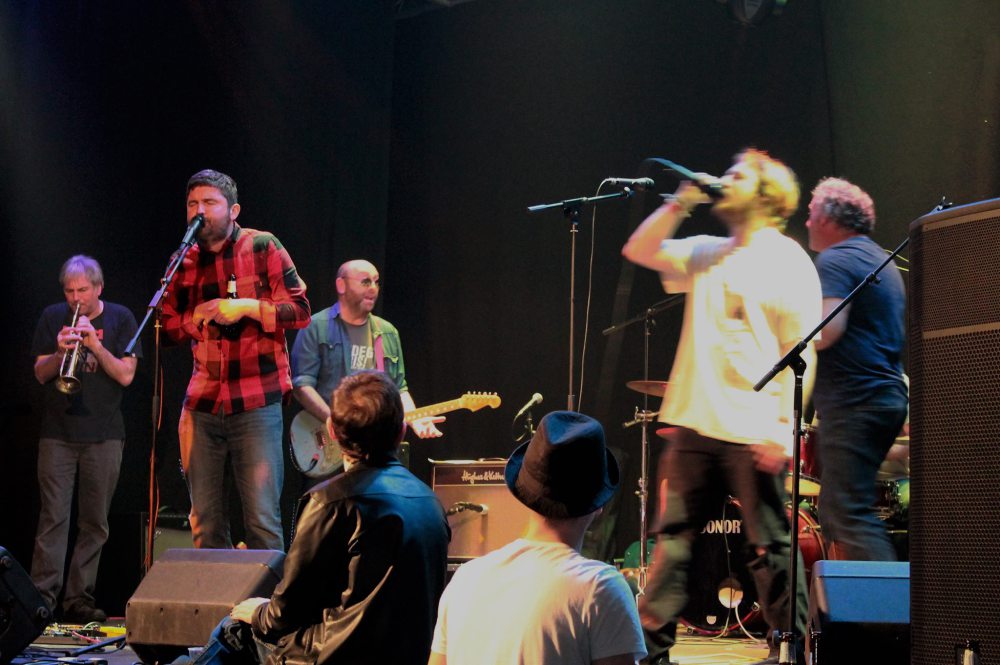 This recent Bank Holiday saw the return of Bethesda’s annual celebration of live music, “Pesda Roc” at Neuadd Ogwen.
The weekend kicked off on Saturday night, with intimate sets from Lastigband, Argrph, Phalcons, and DJ Delweddau Hen Dduwiau in the bar; but there was a definite buzz surrounding Sunday’s upcoming climax of the two day festival; local legends Maffia Mr Huws were back. 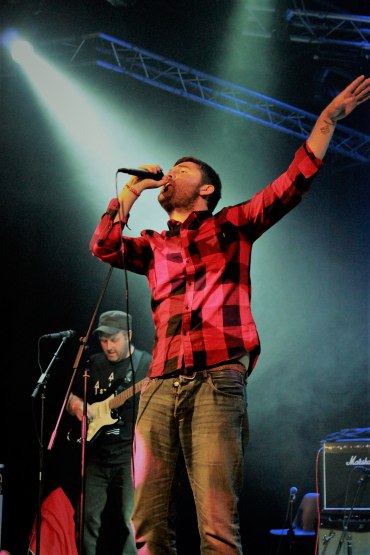 Brython Shag opened the Sunday night; not an easy band to pigeonhole. Opening number “Bywyd Ei Hun” (“Life Itself”) could be an eighties alt-rock anthem, but before you know it, you’re deep in Ian Dury/Blockhead territory; Deian Jones’ funky bass pumping up the crowd on the dance floor.
Vocalist Ceri Cunnington meanwhile, wanders the stage like a man with no control over his limbs. It’s a captivating, if chaotic performance; at one point, during a delightfully new wave/punk pop, Summer infused “Sana Gwyn A Sandals” (“White Socks And Sandals”), Cunnington almost cuts off the start of a sparkling solo from guitarist Gai Toms.
Sadly, their set had to be cut short; there were three bands waiting to play. They closed with “Dwnsia Ne Granda” (“Dance Or Listen”), and this reviewer was left wishing there had been more time available to do both. They are most definitely on the “Listen Again” list. 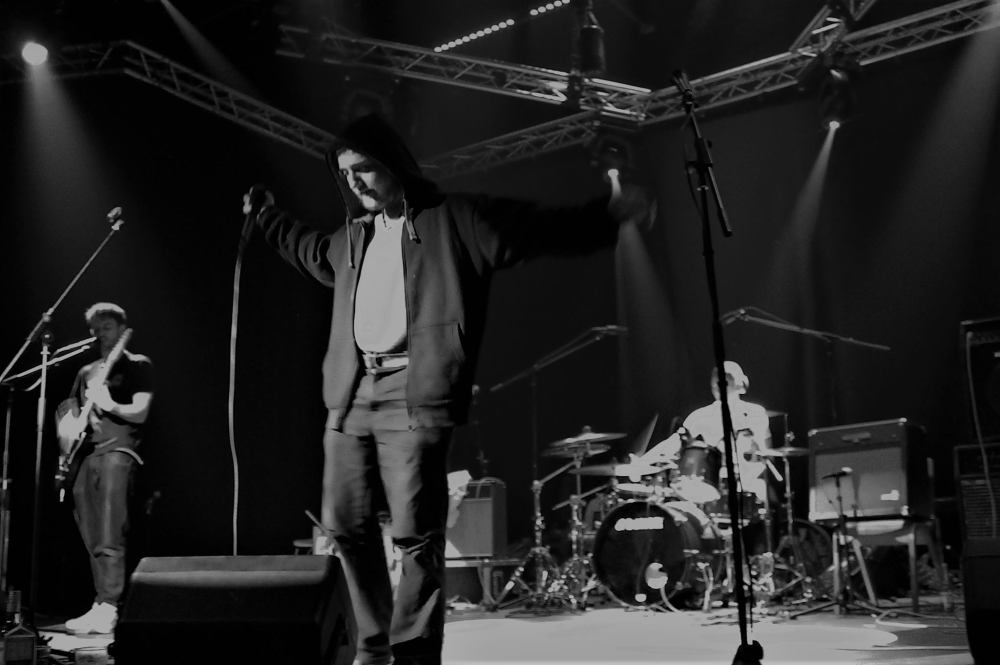 Next up were Radio Rhydd. In these days of X-Factor/No Talent nightmares, let’s be grateful there are still angry young men like Radio Rhydd making real music; and urging us to smash up and burn our TVs.
Vocalist Cai O’Marah embodied the bands’ passionate outrage; rasping and ranting and rapping his way topless on stage, singing like a man on a mission to spread the word. The fact that they grew up listening to and being inspired by Maffia Mr Huws is beyond any doubt really; although they do add their own white, urban hip-hop touch to the punk and reggae mix of their local heroes.
A furious “Bernard Bancs” kicked off the set; Radio Rhydd meant business. Four songs in, and Brython Shag’s Ceri Cunnington is invited back on stage for “Cariad a Chymuned”, and the audience goes wild.
Drums ticked like a Doomsday Clock approaching midnight, during closing number “Croeso I’r Apocalypse” (“Welcome The Apocalypse”). Radio Rhydd were having a blast, and so were the audience. But there was still one more band to go before the much anticipated return of Maffia Mr Huws. 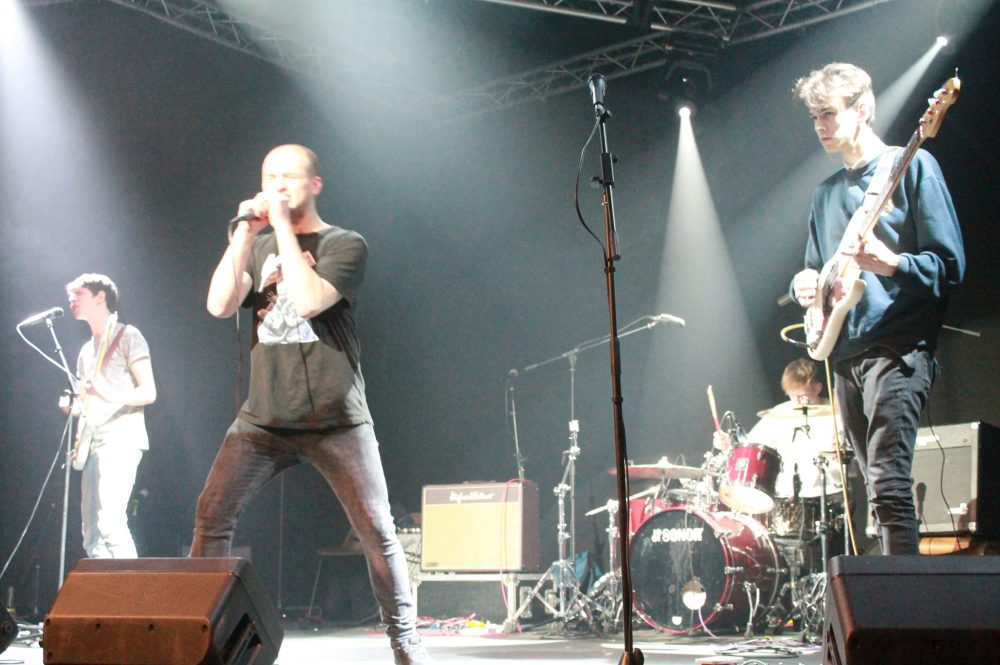 That penultimate band being Ffug.
The band opened with the spindly instrumental “Be My Friend”, before things turned heavy glam with “Anorexic Alcoholic”. By the time “Love Is Stupid” kicked in, three young skateboarders were leaning against a wall to one side of the venue, nodding their heads in time to the frantic beat, while a group of middle aged men jumped up and down across the room like it was 1977, and a woman shook and swirled around in the middle of the dance floor. Ffug, it appears, have something for everyone who likes their music heavy and loud. It’s hard to imagine such a large noise is coming from the four slight and skinny lads on stage.
Vocalist Iolo Selyf snarls like Cobain one minute, before switching to a sneer that wouldn’t sound out of place on an early Japan album.
Billy Morley’s guitar sleazed and seduced during a slinking, mid set “Speedboat Dreaming”, whilst Henry Jones (bass) and Joey Robbins (drums) smashed their way through “Are You With Us?”; the kind of song you can imagine hearing while the credits roll, at the end of a particularly fast and furiously explosive action movie. 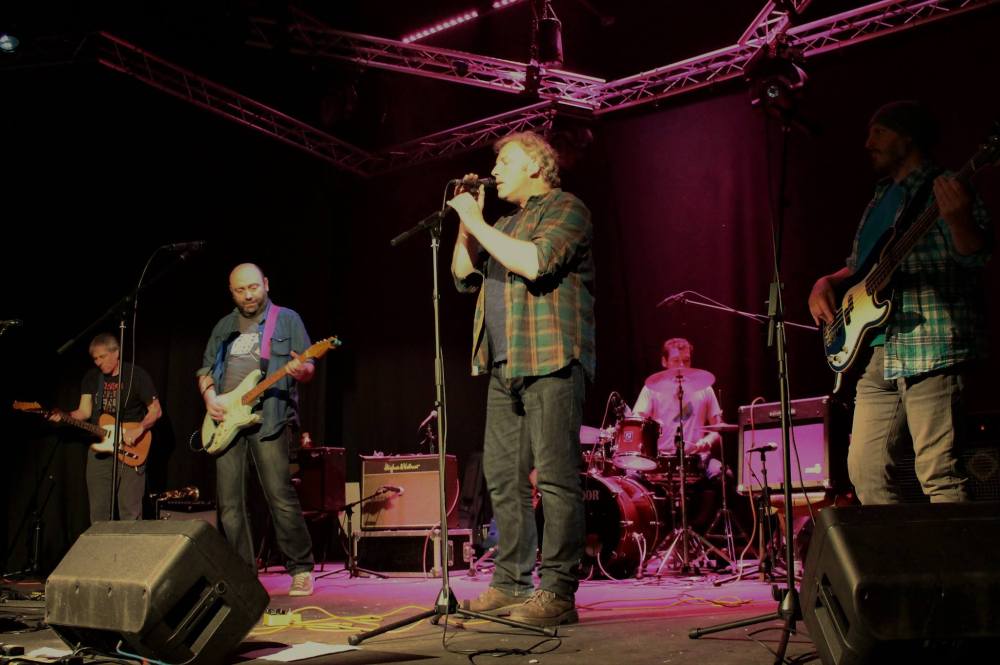 But now it was the moment everyone had been waiting for; Maffia Mr Huws were ready to rock, and the crowd were ready to enjoy. No one was disappointed.
The band hit the stage running with “Newyddion Heddiw” and the crowd went wild; not least the singers of Brython Shag and Radio Rhydd, who stormed onto the dance floor, along with the rest of the fans. This was old skool punk rock, with a heady dose of reggae thrown in.
When the band started playing “Yr Addewid”, Radio Rhydd’s Cai O’Marah could no longer contain his enthusiasm and climbed on stage; the mic being handed to him by Maffia Mr Huws’ lead vocalist, Hefin Huws. The mic could have been a baton of musical heritage, being passed on from one generation to the next.
Maybe it’s something in the Bethesda water, because towards the end of the set, both O’Marah and Brython Shag’s Ceri Cunnington were back on stage with the headliners; hijacking the mics, while Huws proved that original punks still know how to rebel with style. He lit a cigarette and stood back; allowing the young ones another chance to shine. The crowd lapped up every moment.
The night ended with Maffia Mr Huws, the crowd, and the supporting acts all leaping around, having a whale of a time, and singing along to the motoring fury of “Gitar yn y To”.