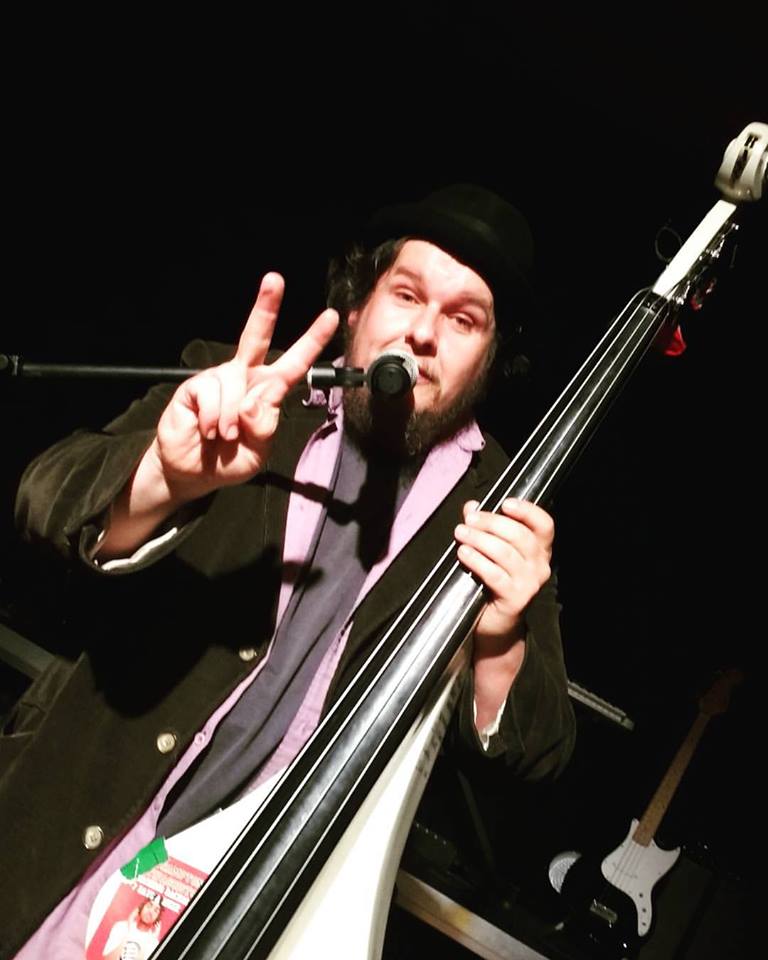 Grant Sharkey is an incredible human being. He must have woke up one morning and decided that if he couldn’t change the world for the better, then he would at least die trying. The sad fact is that only a despot dictator with an arsenal of nuclear weapons has the power to change the world for the better. Humankind would be wiped out and once the radioactivity died down, nature would again prevail and cats would grow thumbs and rule planet earth.

However (hopefully, for now) we digress… Grant Sharkey pledged to whoever was listening, to release an album every six months for twenty years and tour them. That’s forty albums – hence the sequence number before each album.

The incredible feat is that Grant leaves his homeland of Southampton and tours with his double bass, the length and breadth of the country in a car too small to carry it. Sleeping on couches and living off whatever he can raise through his performances or handouts placed in his hat.
Some nights will be incredible, full of bellowing people committed to the cause, others will be full of coked up dickheads and people staring at their phones, and others will be like tonight – when five of us turned up at TAPE in Old Colwyn.

I could have tarted up this review and not mentioned the audience and you’d have been none the wiser, but there is a stark reality and an occupational hazard about touring to build up a name and reputation. Sometimes you’re gonna be a band without an audience (my record is two people, and they both left before we hit the stage).
The show will go on, and in effect, the number of people who’ll read this review will boost Grant’s Tuesday night attendance in Old Colwyn to around 405.

Radical You! (Vol.1) was performed from start to finish. It’s an album to help keep you sane in an irrational world through the medium of song, verse and a double bass held together by gaffer tape and luck.
Join the Rational Front..! Everybody in..!
The show was of course funny, extremely entertaining and thought provoking… And I really will contemplate giving Wetherspoons a miss, I’ve booked an appointment to have a vasectomy, I’m gonna start playing bass again, I will always berate bands who sing about absolutely nothing, and I’ll never threaten to kill a refugee again… (listen to the album and all will be explained).
Like he said… ‘There will be no space for regrets inside my grave…’
Damn right…
Grant Sharkey Bandcamp