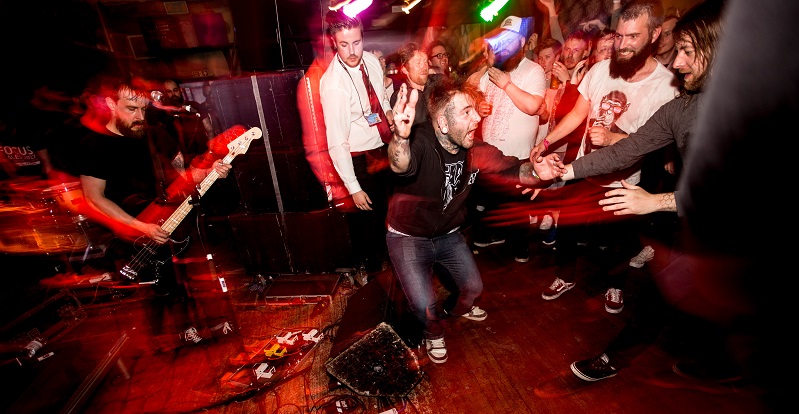 The stature of Focus Wales grows every year, as does the stature of bands queuing up to play it and the queues of people wanting to see them. Spread across Wrexham in at least seventeen venues / stages / settings – it has something to offer for anyone looking for artistic enlightenment…. Or, in other words – getting smashed and having a great time. (pic Exit International by Brent Jones and below) 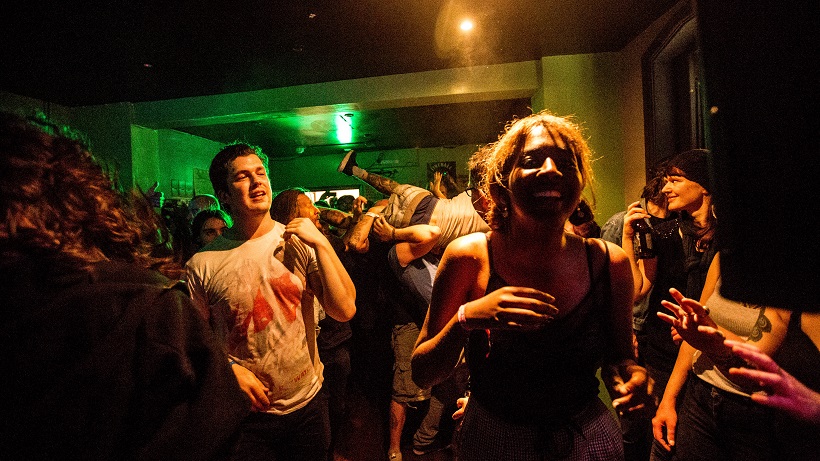 Forty quid for a weekend wristband that allows you access to over 250 bands and artists..! Talk about sale of the century… That wristband means you can dip in an out of venues, delve into other peoples’ worlds at your leisure, or of course, take in a whole show. Compare this with another North Wales Festival made up of a number, then for being a local festival run by local people, Focus Wales wins hands down EVERY TIME. Mixing ‘name’ bands with local bands and overseas bands – the blend is almost perfect.
Focus Wales runs from Thursday to Saturday… This just my little segment of it…

With so many stages and so much going on, band clashes were inevitable, and you feared (as has happened previously) that some bands would be left without an audience due to the draw of a bigger name. What I saw this year didn’t seem to be the case, with far more punters on the ground. Let’s take that dirty little picker from Canada called Darren Eedens. He’s at the Royal Oak with his banjo and everyone who’s anyone in Wrexham is crammed in to see his cotton-picking rootsy style of honky tonk folk. 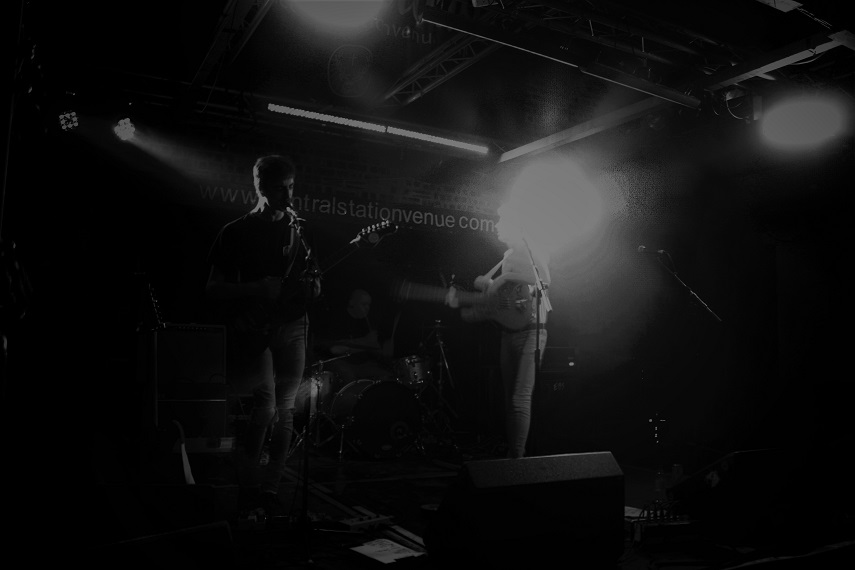 I did what is now tradition in managing to miss Heldinky (again!), but ascended on Chupa Cabra on the main stage in Central Station. They introduced themselves as Wales’ Premier Stereophonics Cover Band and proceeded to rip into their strewn mess like a garage demolition band. Singer Hayden was grown a twat moustache to make himself look more of a twat; and make no bones about it – this is a band on top of their game.
The vacuous sound of Central Station wasn’t helped by reverb on every instrument and microphone, but it was brushed aside by an unsubtle band who are brash, loud and oikish and the world is a better place because of Chupa Cabra.

With an invasion of Canadian bands at Focus Wales this year it was a hop, skip and a paddle through the near-torrential rain to Un Deg Un to catch Lab Coast. An unfinished indie band in Cine 8, who start playing happy-go-lucky tunes and then kind of run out of song. Sounds odd, but it works. Like a roadtrip soundtrack in places and disjointed in others – but there’s plenty to keep you interested. 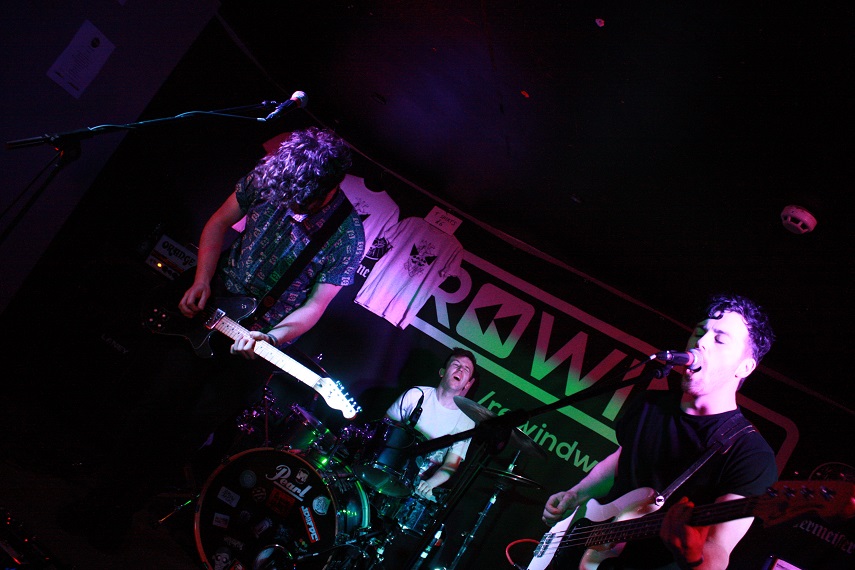 Then down to Rewind to catch Deeside’s Graaves who are a revamp of Blood Lips, only slightly slower but more intense. Rewind is the perfect venue, it’s purpose built and really small. Graaves almost blew the windows out with their opening song I’ve Got A Pet Called Rhianna. The close confines give us beautiful feedback before the excellent Heartbeats is blasted out. Also did a song about wrestling which was ace. 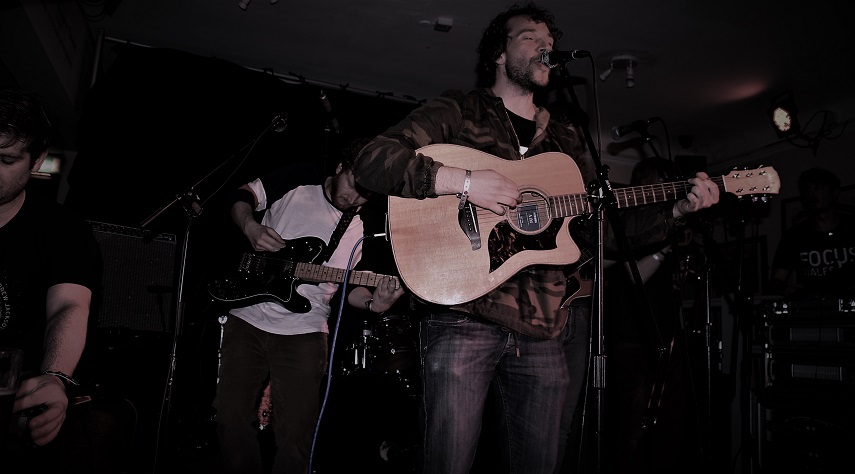 Venue hopping is certainly on the agenda as we get wet heading to the further reaches of this festival to Saith Seren where Rhyl’s Gintis are assembling themselves. I say Rhyl, but they are now Liverpool, Manchester, Abergele, Pantasaph and Ireland! With an imminent 7″ single due out on Popty Ping Records they played a set of seven new songs, which was going swimmingly in their typically off-key and off-kilter casual way until Kyle broke a string. The momentum ground to a halt as guitars were repaired and reputation restored (!).
Once back up and time running out, Darren Eedens was summoned with his banjo and they performed the closing track from their 2011 ‘Idiot Guides And Plans’ album Now I Know – an absolute tear jerker of a song that makes grown men cry and had the crowd all singing in unison. Such uplifting melancholy and truly one of those ‘I was there [goosebump] moments.’ 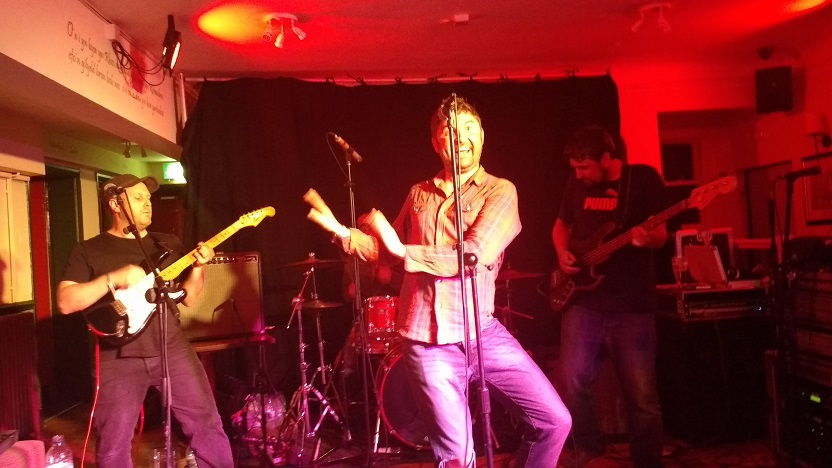 Brython Shag kind of made a statement about Saith Seren being a Welsh language band ghetto while the real bands played at other venues. His (Ceri) point was that Welsh bands had marginalised themselves and were treated as such, they didn’t mix with non-Welsh language bands and pay the price. Then followed rants about local Welsh Assembly politician Ken Skates, none of them re-printable! Down to the music, and Brython Shag are criminals for the fact they play far too infrequently… They are so good live… They kick off with Dwnsia Ne Granda, cementing the fact that they are such a tight unit. Add to this mix a schizo-crazed vocalist who swings from threatening to smash your teeth in to grinning inanely, and you have a life affirming formula! It’s tough pub-punk-rock music for the deranged and highly recommended. And yes, there needs to be far more Welsh/English line-up gigs to bring in new converts and prevent ever-decreasing circles. 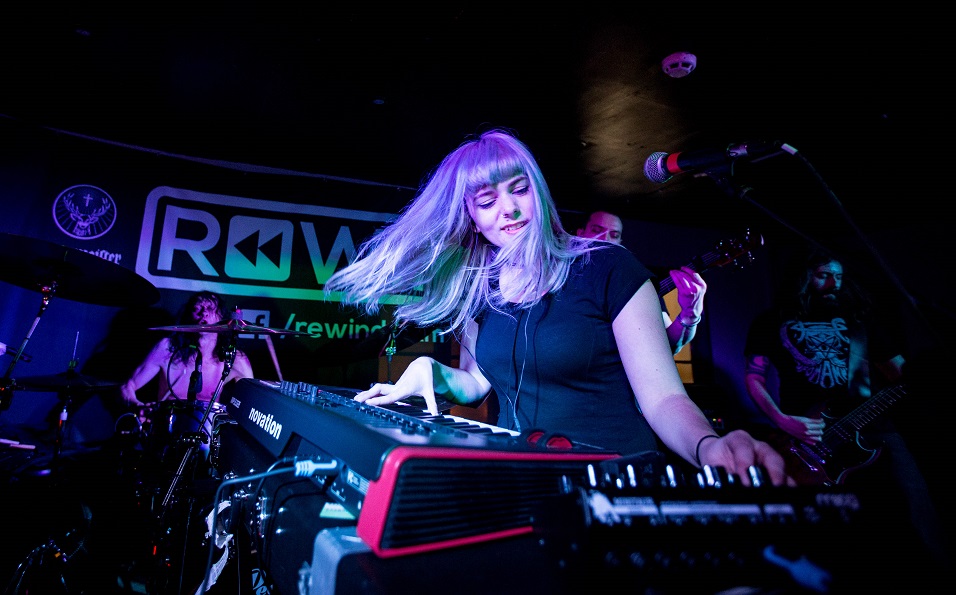 Then through the wind and the rain and back to Rewind to catch Mammoth Weed Wizard Bastard (pic by Brent Jones)… Well, that was the plan, but the interest in one of Wrexham’s finest exports far out-weighed the size of the venue. It was rammed to the ceiling and they weren’t allowing anyone else in. That said, a large crowd were gathered on the pavement across the road, all looking up to the steamed windows of the venue. It was SO LOUD! We stood in awe of the doom stricken riffs of their latest album Y Proffydd Dwyll and observed as surfers slid along the tops of the crowd.  Eye witnesses described the show as one big sweaty mess… Fantastic. 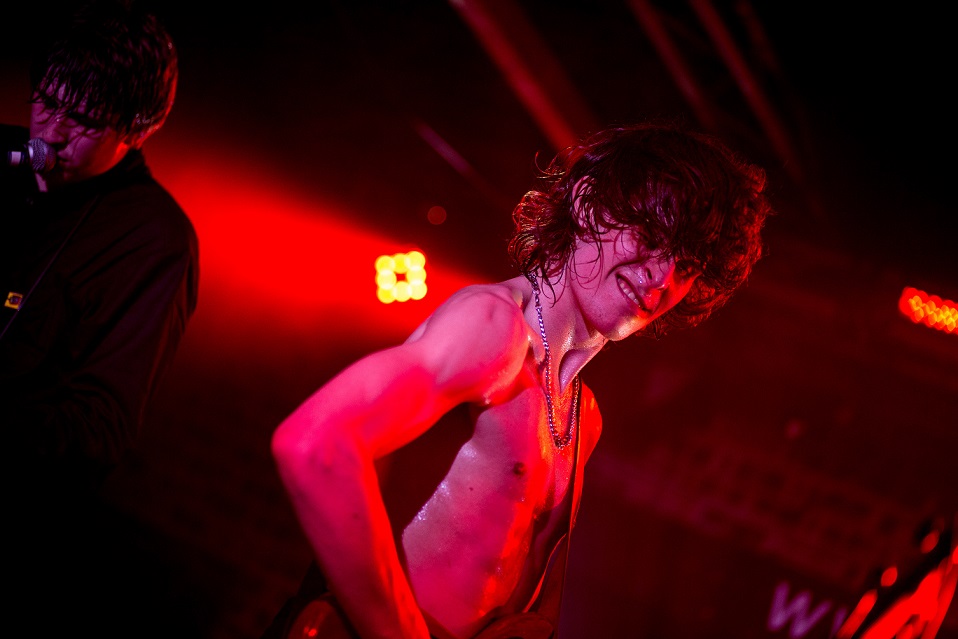 One final jaunt to Central Station to see the band of the moment, Cabbage (pic by Brent Jones). Like watching Slaves here a couple of years ago, it is great to catch a band in the ascendancy and Cabbage are certainly that (for all sorts of reasons). These terrorist synthesizers are top drawer entertainment with their good looks and gritty sound. Songs like Kevin with it’s Fall-esq guitar chops and Hookworm FX and manic vocals culminating in a maelstrom of sonic nirvana… From the theatrical semi-sexy story telling of Dinner Lady, to the singalong ‘I was born in the NHS, I wanna die in the NHS’ of Necroflat In the Palace, Cabbage will entertain you while telling you it’s Grim Up North Korea.

Once again, Focus Wales put their cards on the table to reveal five aces…