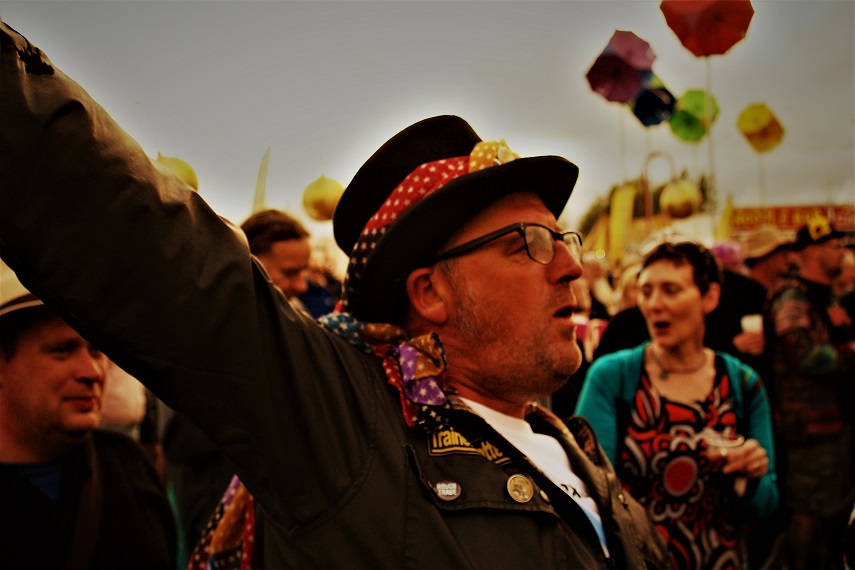 By Sunday you have acclimatised to being a crusty festival goer, you may even contemplate queuing for a shower, or at least having a ‘gentleman’s wash’. You know the best time to use the toilets and which ones will be the cleanest and have the least waiting time. You’ll have your favourite food outlet and your preferred tipple. You’ll leave your tent prepared for the day ahead with an itinerary of what acts you’re going to see.

Top of my Sunday list and for everyone else were Goldblade. They opened the main Pallet Stage with their customary ‘Fighting on the dancefloor, fucking in the streets’ singalong. The swearing goes over the heads of kids too young to understand or old enough not to notice. The band are on fine form, maybe it’s that feeling of being unleashed, having being shackled by the two year and ongoing success of John Robb’s other band The Membranes. Whatever the reason, all five are up for it and they do a smash ‘n’ grab with their punk rock psychobilly oi set that is strictly hardcore. The shamen may well be coming, they may well call you psycho but this jukebox generation are out of control, for they believe in the power of rock ‘n’ roll. 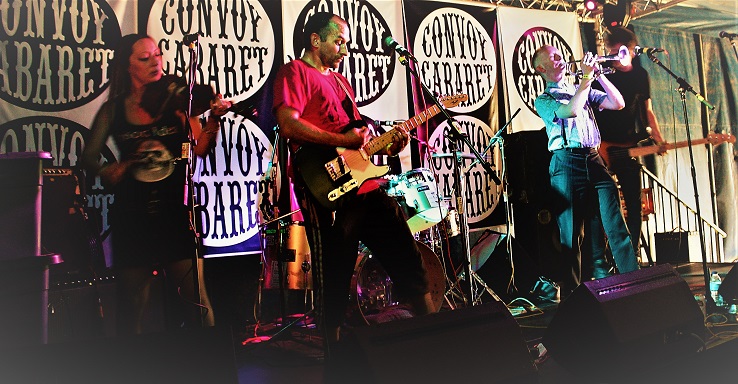 We caught Spanner in the Convoy Cabaret tent and were so glad we did. These are very tightly wound people! Dual vocals, hardcore-ska, angry guitars, a violin and cornet all add up to a beautiful militant noise. The cornet playing vocalist, with his shirt and braces looked like the kind of person who’d chop you up and feed you to your best mate’s mum. Check out their album ‘Crisis’ out on Rebel Time Records. 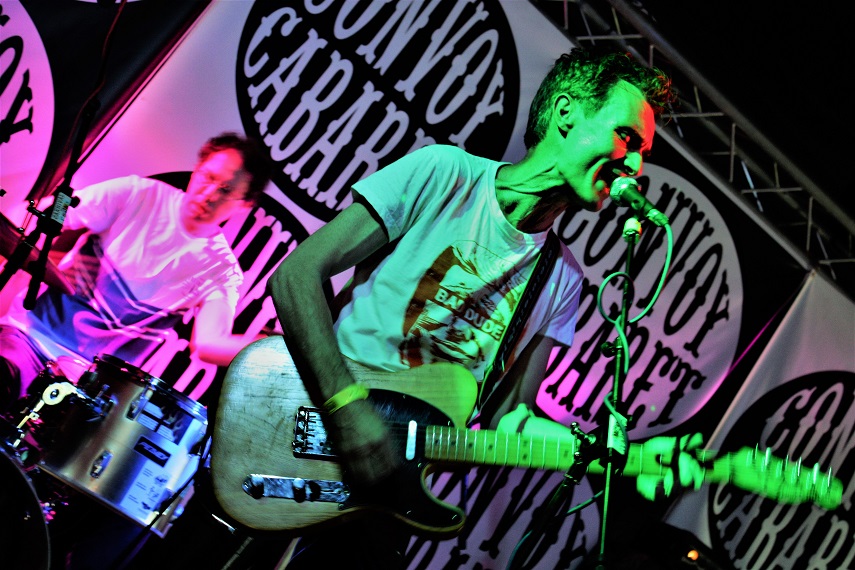 The heat, the fourth day of walking and partying finally took it’s toll and I flaked out near the Pallet Stage to the dulcet voice of Pauline Black as Selector played their festival pleasing set.
An hour later, refreshed and ready for more it was back to the Convoy Cabaret to tick a box I thought would forever remain unticked. I saw Omega Tribe [pic above], a band I first heard on the Crass Records compilation ‘Bullshit Detector.’ The label were suitably impressed enough to release the band a single and Angry Songs came out in 1982. They were playing it as we walked into the tent. Omega Tribe were more post-punk than the rest of their ilk at the time. There was less shouting at you and more observational subjects like today’s offering of Flippin Idiot and Skinhead. They finished on the excellent My Tears and, like a lot of bands who’ve been around this long, they’ve got far better at playing! 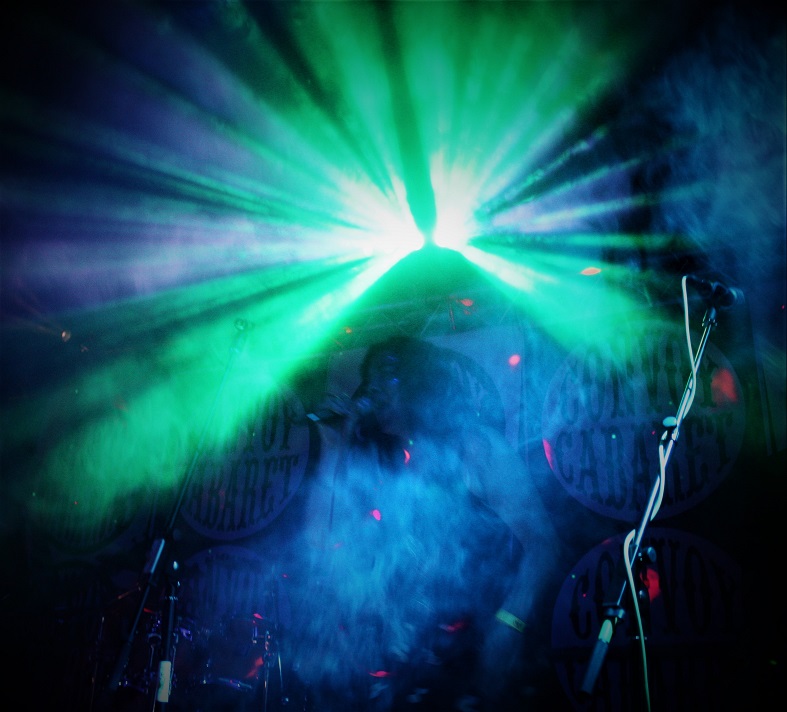 Bearded Theory is a habit my sisters and myself have developed, we don’t even look at the line-up before booking the tickets. It’s the vibe we go for and the acts compliment our eclectic tastes. This year, the ‘big-names’ in the line-up didn’t particularly have me jumping through hoops but I knew it would allow me to go on a voyage of discovery. 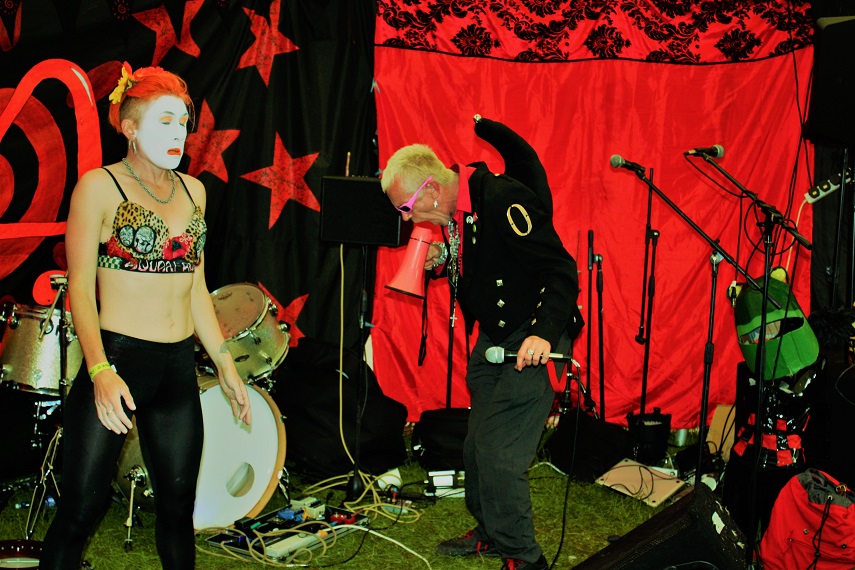 Walking past the Something Else Tea Tent I heard a voice I recognised. ‘This has gotta be Sicknote‘ I thought. Either that or there’s an uncanny vocal resemblance. My thoughts were founded; billed as Doghouse & Slugbucket this is a double act from Cardiff with a electro-dub-dance backing (a la Sicknote) and socio-politico lyrics – real life lyrics with a humourous bent. Add the superb supporting dance-mime skills of Slugbucket and you have an intriguingly infectiously funny performance. Recommended… 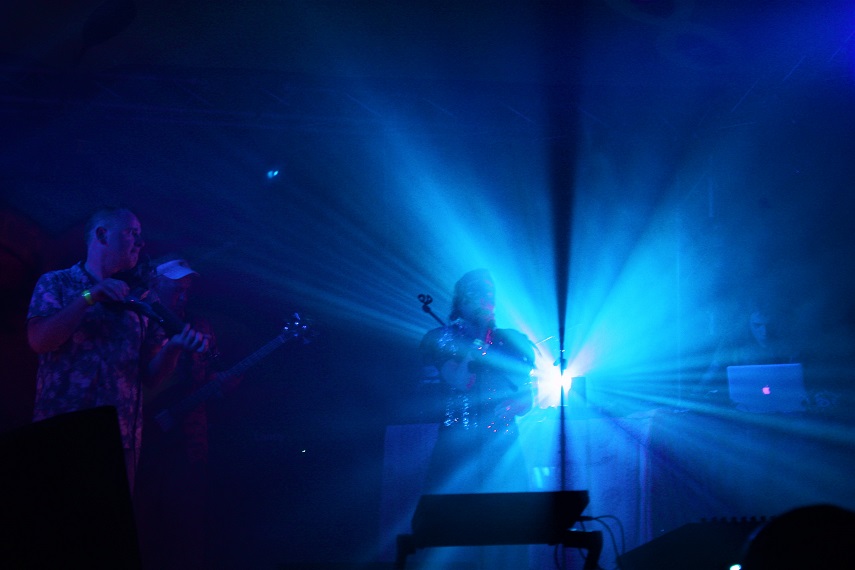 The heavy dub bass coming from the Magical Sounds Tent signalled that Jah Wobble was in the house. Billed as Dub Trees, this ensemble also featured Killing Joke‘s Youth, a wind instrumentalist, two violins, drums, haunting vocalist and a couple of keyboards/laptops. It seems improvised and all the better for it as the mantra spaced out rhythms enveloped us, taking us on a colourful journey to a land of dub and honey. 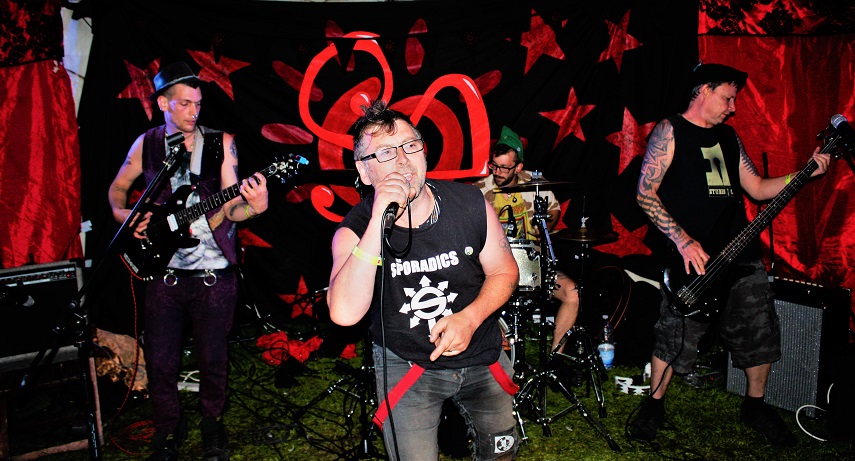 A cup of green tea and cake was called for as the sun set and the rain came down. We sought shelter in the Something Else Tent and were entertained by The Sporadics and their fast crusty-ska. Singer Shaun complained of being a broken man after a full weekend as their following swigged neat vodka and danced and skanked through their wholly entertaining set. Stand out songs for me were Used To Be A Punk and Love, which venture far into Inner Terrestrial territory but with a harder bite. Good brash (no)nonsense stuff. Check out their ‘Fight Truth Decay’ album out now on Pumpkin Records. 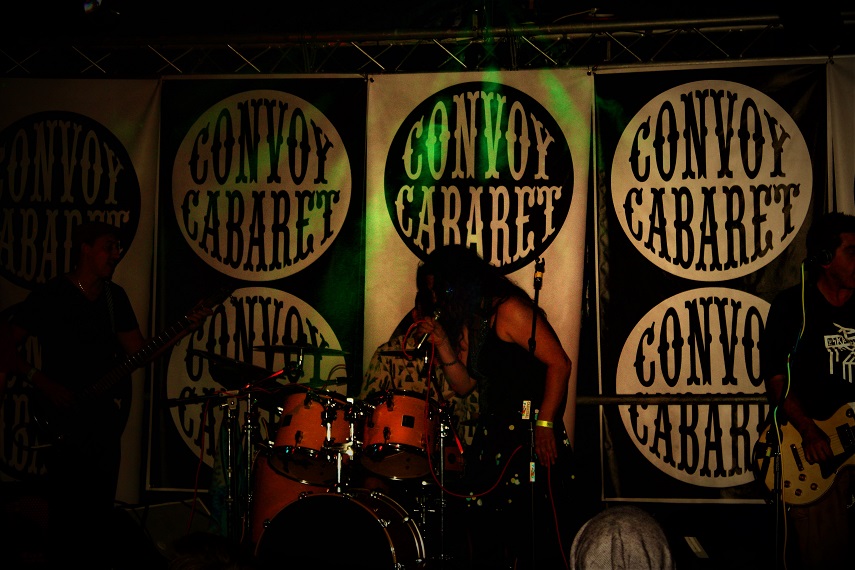 The droves are heading to see Madness, my sister Jane, Frank Ewe and Mike are heading to see Transglobal Underground, Fatman is off to see Reverend & The Makers. Little sister Emma and myself head to the Convoy Cabaret for Back To The Planet [pic above]. I caught them on the main stage a couple of years ago and, although good, they didn’t quite hit the mark then. No chance of that tonight in this packed tent, they hit the stage running and did not stop… They closed this little segment of Bearded Theory Festival 2017 in a manner that was absolutely superb. Back To The Planet were up for it and everyone here were up for it. Their keyboard player was on his birthday weekend; he was as oiled as the audience and I feared he was about to fall into the crowd. He didn’t, and neither did he miss a note (although he did add a few ha ha). The whole place was bouncing, and when they finished we demanded they bounced some more… They obliged… After The Fall last night this was my favourite set of BT17…
See you next year…