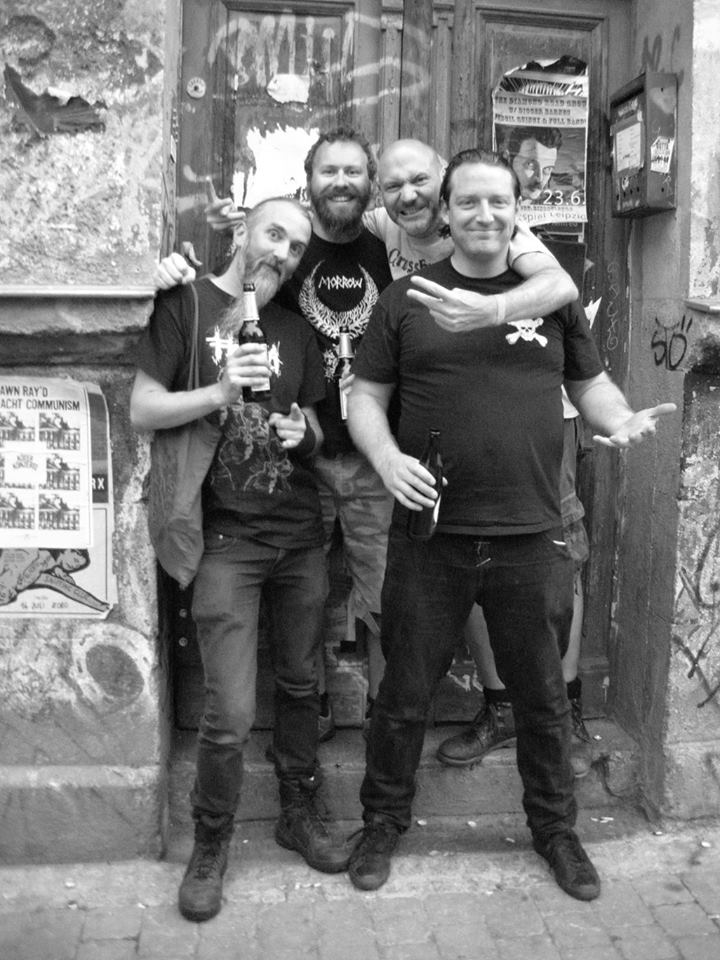 A long time mantra for me and by extension the band has been “go places, meet people, do things”. Following this philosophy seems to happily lead to an exponential and tangential myriad of occasions and opportunities to live life loud in locations esoteric and exotic.

Just like our Russia tour in the spring, this next Euro tour originated in the international symposium of sickness and shenanigans that is Obscene Extreme Festival, where in a previous year I had temporarily sheltered from the rain under a tree with Peta. This Czech native runs a label, distro and festival and with an exchange of his card and an Emissaries Of Syn CD connections were made, he liked our stuff, and invited us to his More Noise For Life festival, which we were glad to do. In picking up our 7” split he was also introduced to the madness of Spam Javelin, and invited them along for the ride too. Thus the North Walian invasion commenced. 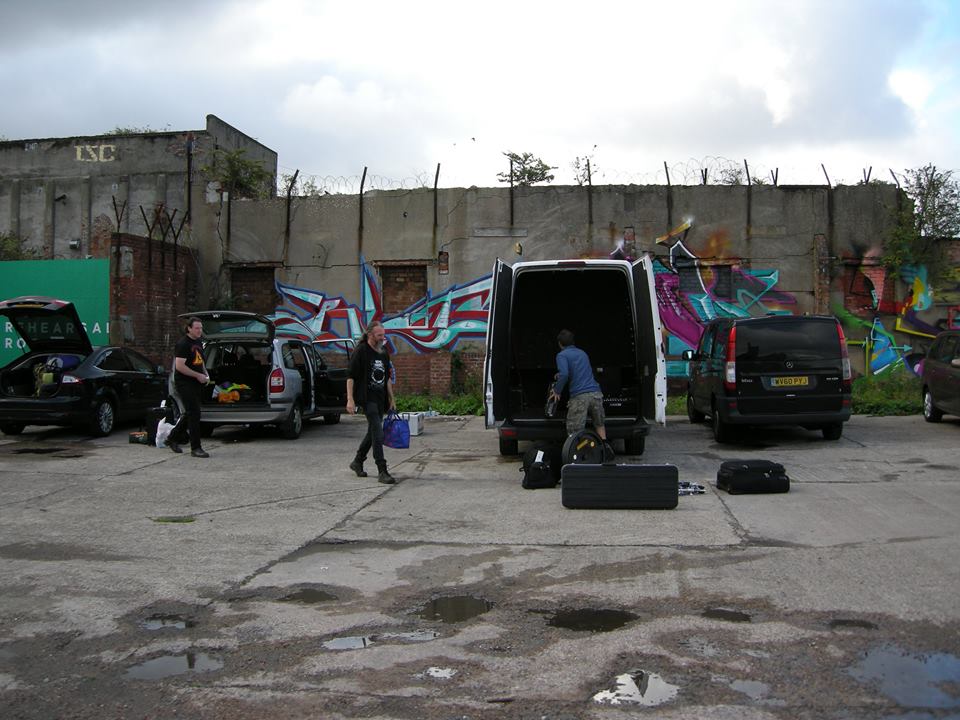 An early start to gather and head over to Liverpool to pick up our mobile home for the week, excellent machine provided by Liverpool Band Vans (recommended), and then our first trek south through the UK. The first prospective new song composed, “Eight Cans By Oxford”, the subsequent b-side “Four Poos By Dover” was not so popular.
We’d elected to go by Eurotunnel and found it a very slick and easy experience, following a Ferrari onto what was evidently the VIP carriage reserved for us. 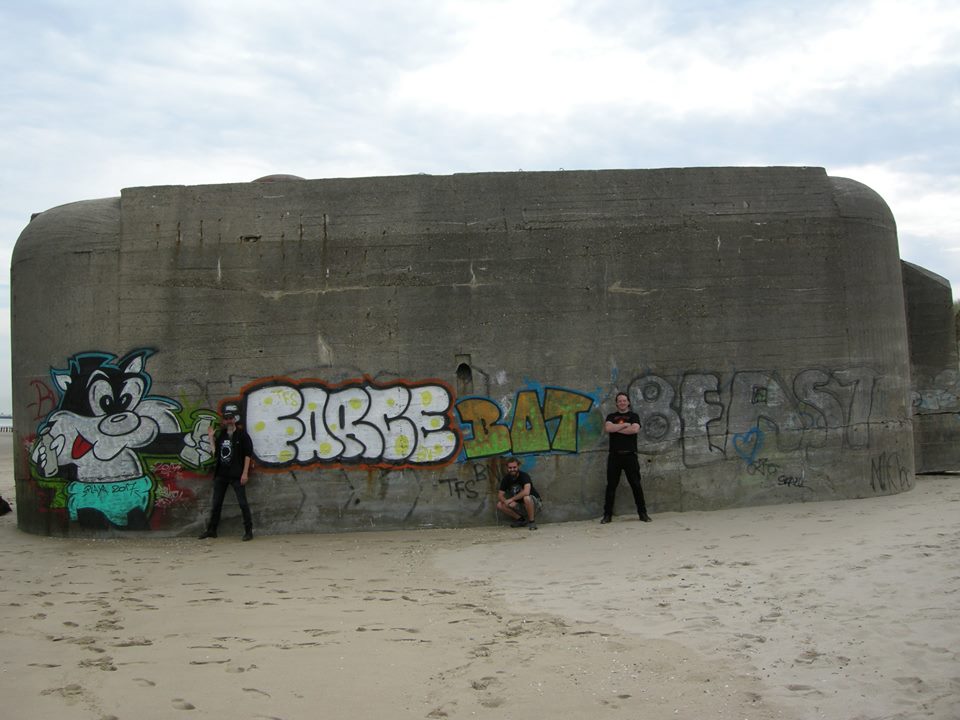 Our first night saw us making a beachhead on the coast between Calais and Dunkirk, and camping in the dunes there, Welcome to the Jungle indeed. It was quite quiet for holiday season and there didn’t seem to be much late night bar action in the coastal village nearby, have they not heard of the Welsh Way? Also we started to be plagued/mocked by ducks, not sure if someone shooting them occasionally was helping or not. Despite best and extensive efforts, we hadn’t been able to book any gigs on the way, lack of summer opportunities, late to ask, nobody knowing us. So this first stage was quite a leisurely affair, inevitably/coincidentally taking on quite a war tour/ wartorn feel as so many expeditionary forces have been in the past. 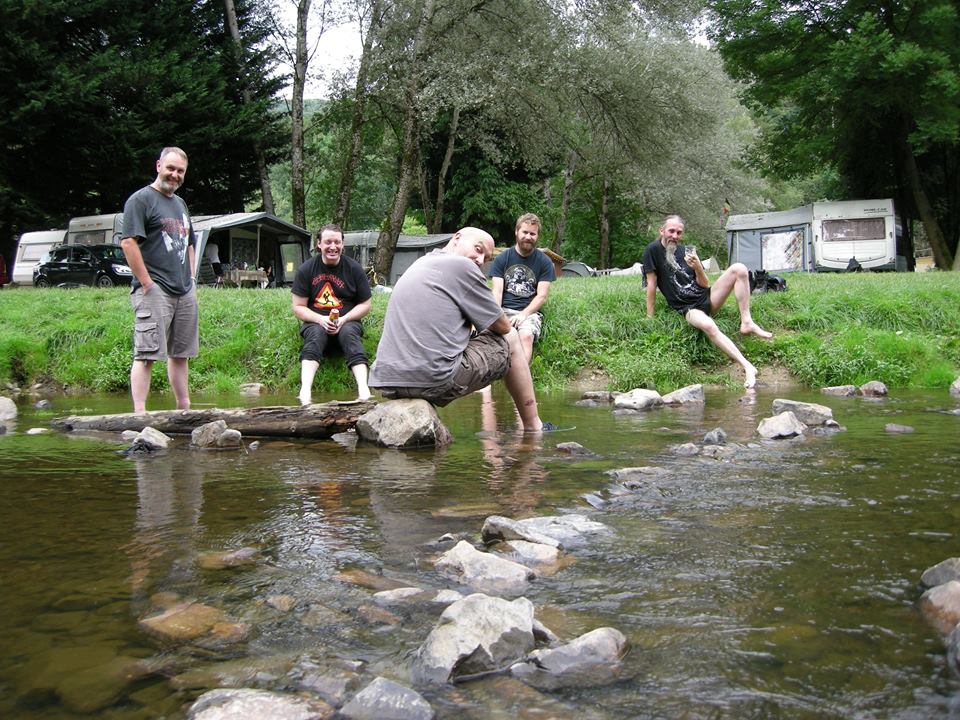 In the morning went to bunkers on the beach for Blair Witch/Nazi Zombie style experience, then we drove on to the heart of Battle of the Bulge (not our beer expanded bellies) country and camped up next at La Roche in Ardennes. Lovely spot on the river in the forests, not unlike Betws y Coed or a mini Conwy with its medieval castle, luxury kebab shops and an Irish Bar that wasn’t very Irish at all, enabling us to sample lots of super strength Belgian brews from various chalices. 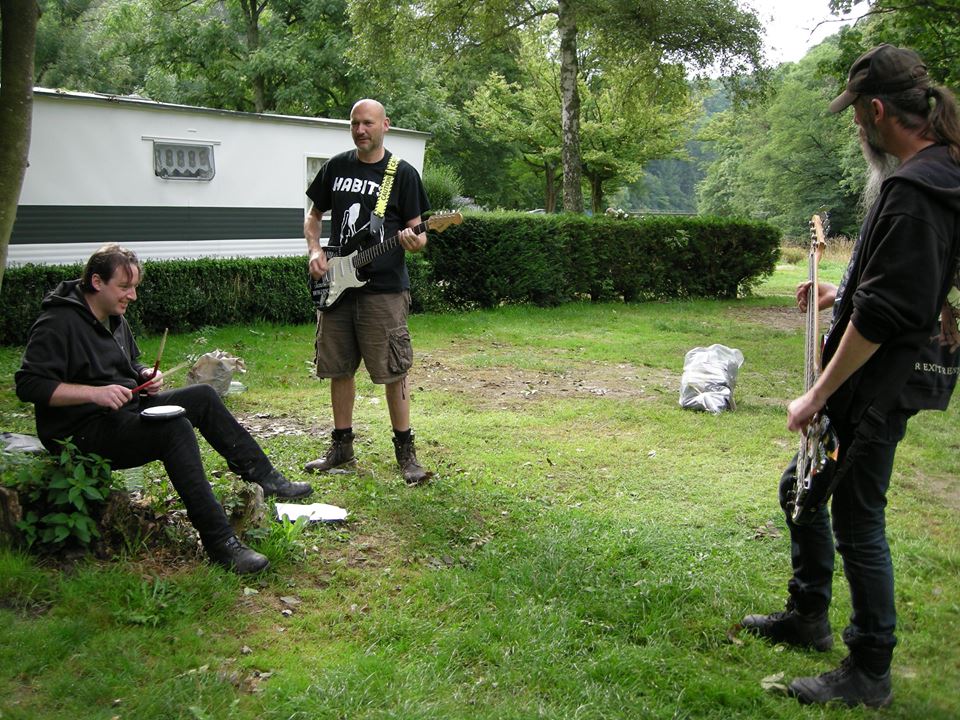 We had an acoustic Spam Javelin jam by the riverbank in the morning to hone the impromptu line up for this tour, attracted more ducks and barking dogs, time to go. The theme continued as our next trails took us to Nuremberg, camped up next to the former Nazi Parade grounds. I’ve been to the city before and we hooked up with my friend Mike in a Kulturgarten (the culture consisting of steins and sausages), before we were guided to the roving Bella Lugosi bar, excellent seedy rock style, and shots thrown in to welcome us. In fine form we made our own march for a night time piss on the podium where once had stood Adolf and alles was gut. 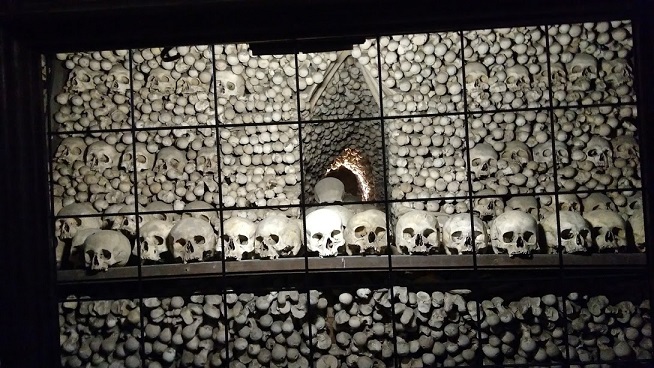 The last stage of our trek took us past Prague, picking up a waif/wife from the airport and, via a pilgrimage to the Sedlec Ossuary Skull’n’Bone Church, through to the tiny village of Podbor out in the countryside a couple of hours to the east. As we approached, it was good to see other crusty types approaching on foot, no doubt via train/bus connections, we were in the right place. The place being a football field in the village, surrounded by woods, and facilities consisting of the club house and changing rooms. The stage was an open air lean-to but the perfect size set up with a decent sound system too, we were fed and boozed, and now had chance to enjoy the day before getting to work later. Excellent cheap distros and anarchist/charity stalls, we were spoiled indeed. 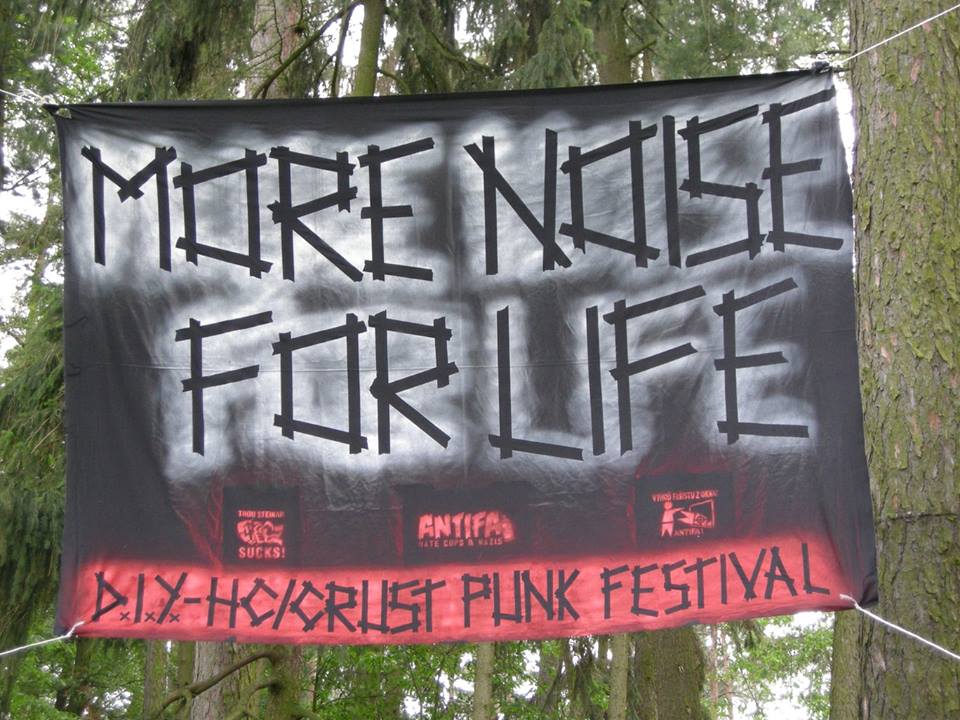 23 bands representing 12 countries around Europe was a wonder in itself, drawing maybe some 150-200 folks scattered around the party zone. Completely DIY, loads of people chipping in to help out left right and centre, even if some were severely smashed. New friends, new sounds to check out. Among the highlights from the opening of this first day, natives Dis-K47 delivered some crunching crust with strong vocals. From France, Affres were an intense experience, blending black metal intensity with their epically structured crust, I was quick to grab their new album. Germans Dishope had a genuinely filthy aggression to their D-beat cored material. 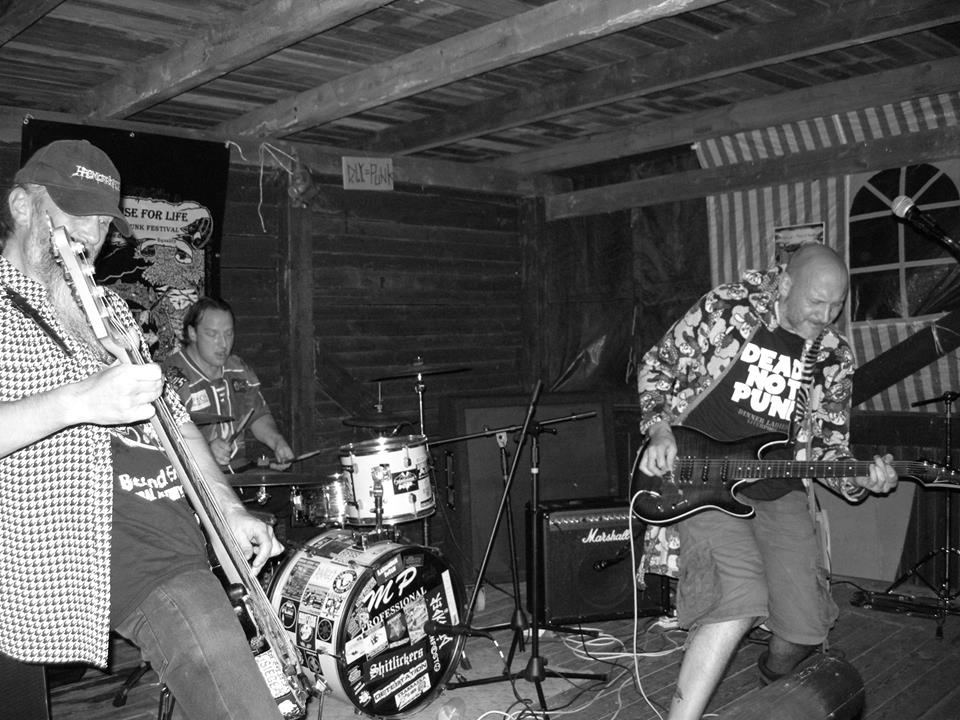 Spam Javelin up next, and, weathering the storm of “ZZ Top, go home”, were hopefully entertaining enough as something different, the reaction was positive. To lay waste to all for the finish, Six-Score from Austria, tight grind with a supreme heaviness to their sound, battering. Well when I say finish, the after party of random dance and extreme metal tunes continued until about 6am, strangely louder at our tents in the distance than up at the gig area. Then things started up again a 7am… 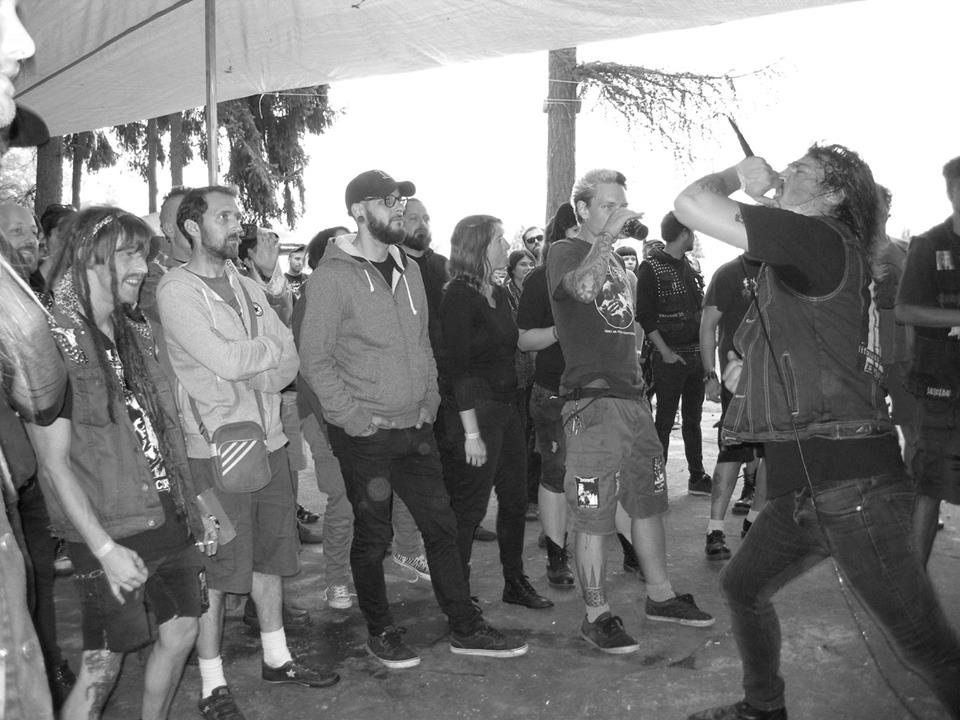 We wandered down to the next town for supplies in the morning, and found a very welcoming and generous café that didn’t mind us polluting their facilities in turn. Plenty of time to chill and even practice some of EOS’s lounge jazz set which will forthcoming at a future event. Strong but somewhat soothing start to the music of the day with Flight 665 who had a doomy aspect, overlaid with screamo vocals. A darker turn with the blackened riffing of Spain’s Ancient Emblem next, atmospheric as well as impassioned. Speedkobra (from Berlin) picked up the pace with an excellent crossover vibe mixed into their heavy, groovy relentless hardcore riffing. Travolta (from Belgium) gave us some explosive hardcore with a supercharged yet amiable vocalist. Renewed acquaintance with France’s Lust For Death (pic above) since last seeing them at a Scumfest in London, now with Pibe from Whoresnation/Black Code on vocals. Still epic crusty death, possible inheritors of Bolt Thrower’s fallen crown, their new “Demons” LP is superb. 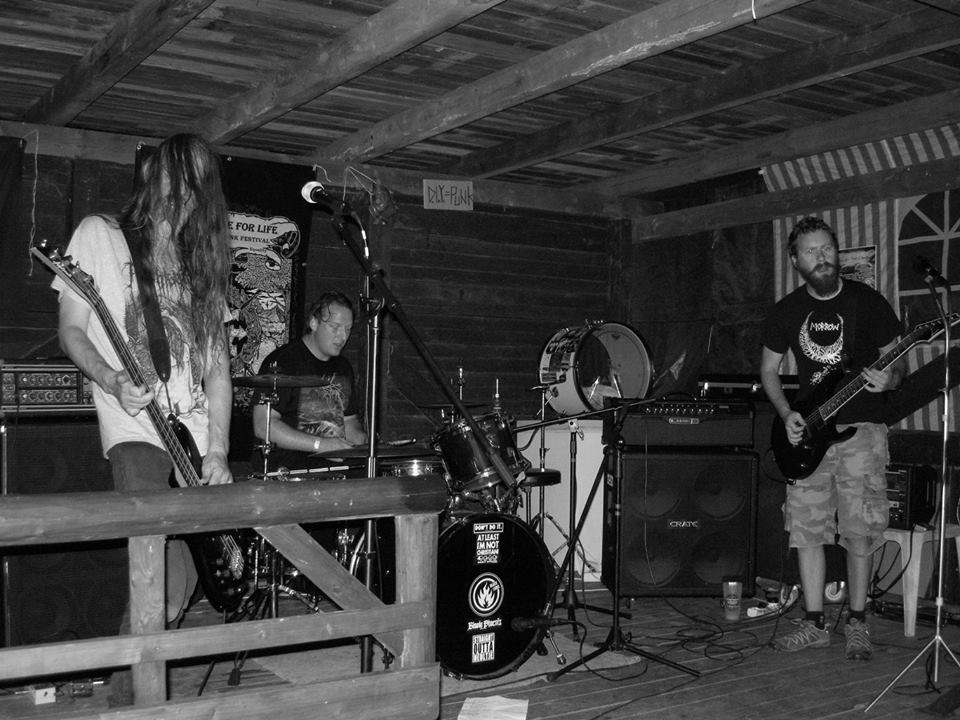 Emissaries Of Syn up next, we battered through our set with lots of deliberate mistakes and the amusement of the sound guys thinking the mike wasn’t working when actually it was my voice giving out. Recovered enough for an encore though. Hungary’s Diskobra provided some excellent rough and ready crusty onslaught before lo and behold we had another Spam appearance, covering for some last minute drop out. A set where maybe we cared less and enjoyed more, it was good fun all round despite breaking my guitar strap half way through and having to adopt some Maiden stance on barrier. 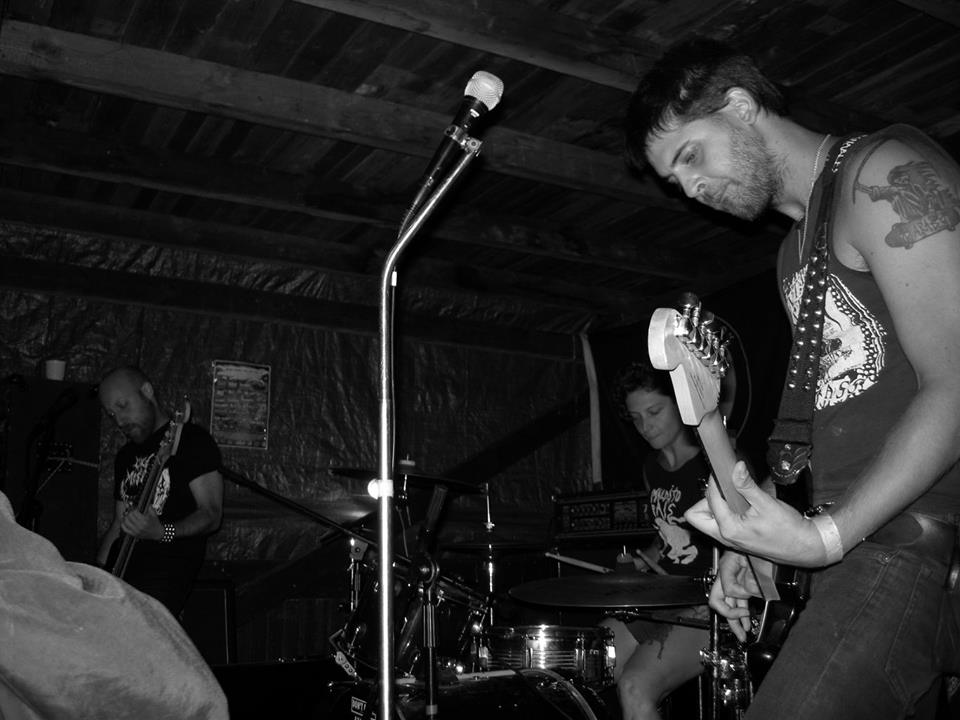 We borrowed our gear to the Spanish 3-piece of Auxilio next who had travelled light and flown in, they delivered some excellent raw hardcore, their drummer pointing out it would be good to see more women on stage – not as guests, playing. More grind and extremity until we have a complete change of tack to end, with the soundguys [Lhostejnost] setting up a bank of amps and a table of electronics and washing us dregs away with a mass of drone in a Sunn 0 style. Before we return again to after show banging tunes. All night. 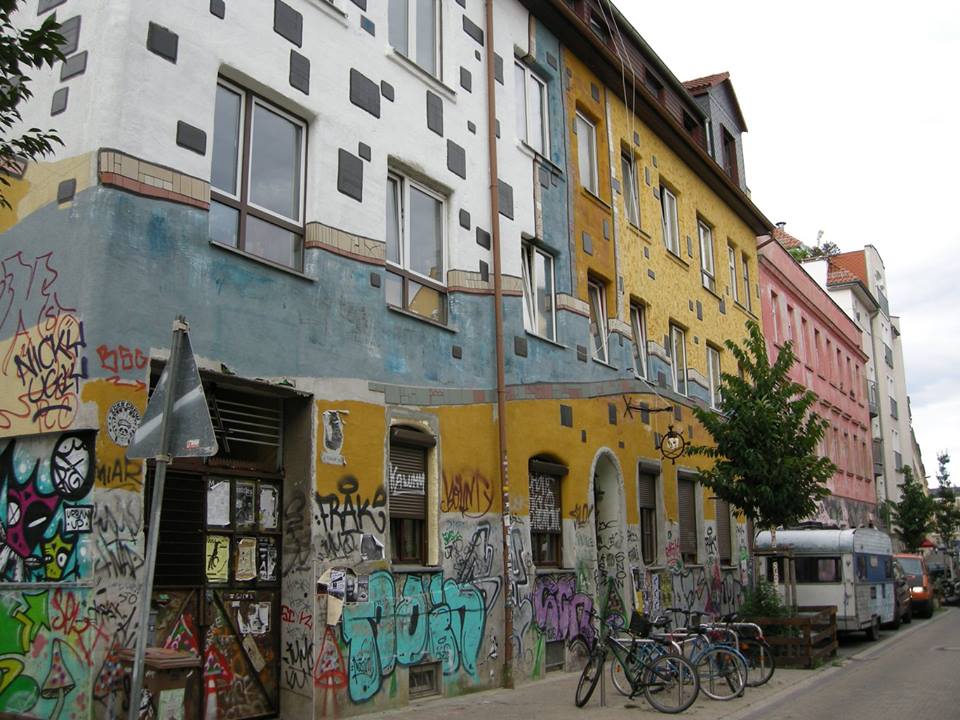 We ease ourselves from site the next morning, and back on the road via ever reliable Lidl’s and McDonalds toilets, heading north west back into Germany. Our destination of choice today is Leipzig, last visited over a decade ago when I came over with Skinflick to play Wave Gotik Treffen Festival. This time we have managed to execute a pincer movement meeting up with fellow UK travellers 2 Sick Monkeys and Feral Existence, at the Sto squat on the south side of town. On finding the venue, an amazing, intimidating/relaxed whole street repossessed and redecorated by the underground, we have time to wander up to the centre, eat and drink at the Pushkin bar (Russia flash-backs), see some proper buildings then return to the set up. It’s a fantastic place where payment for drinks is refused, and people wander in from their adjacent houses when they hear the music. 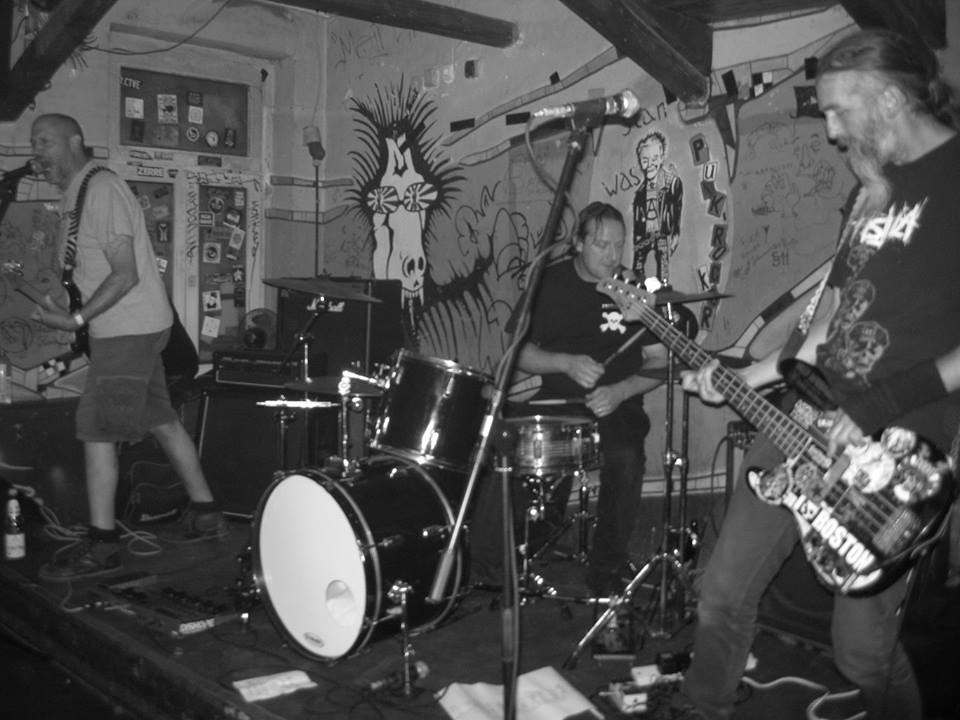 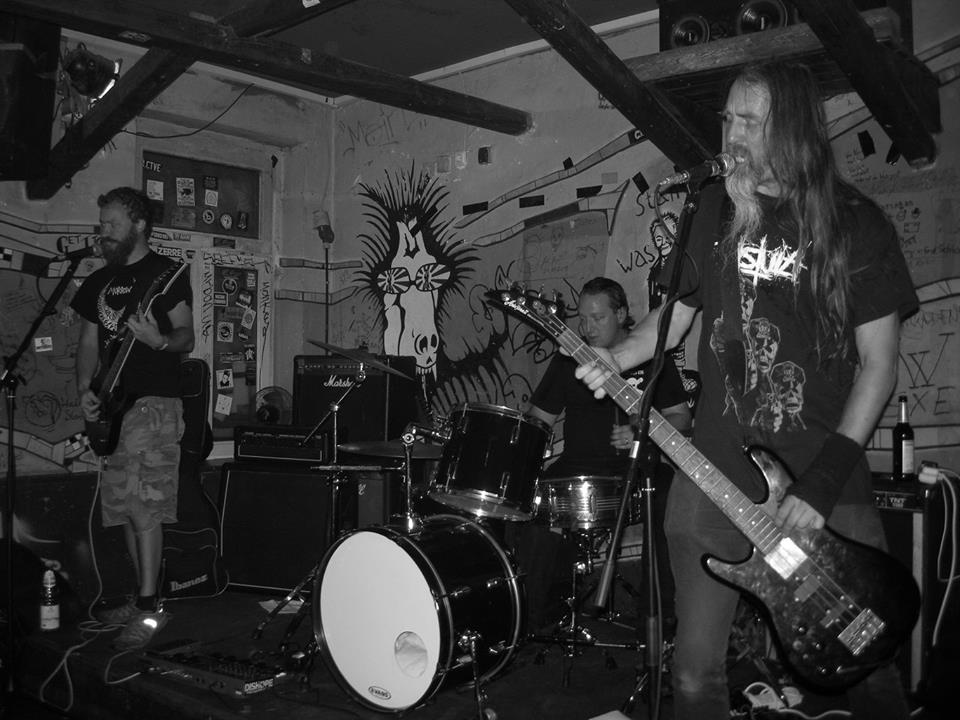 Spam Javelin kick things off and the fun is warmly embraced, a seamless transition to an angry Emissaries Of Syn charge through a set that also gets even the bar staff dancing. Sheffield’s Feral Existence just happen to be in town so are borrowing the gear and give us some fine noisy raging hardcore, excellent drum rhythms, filthy bass and interweaving vocals. 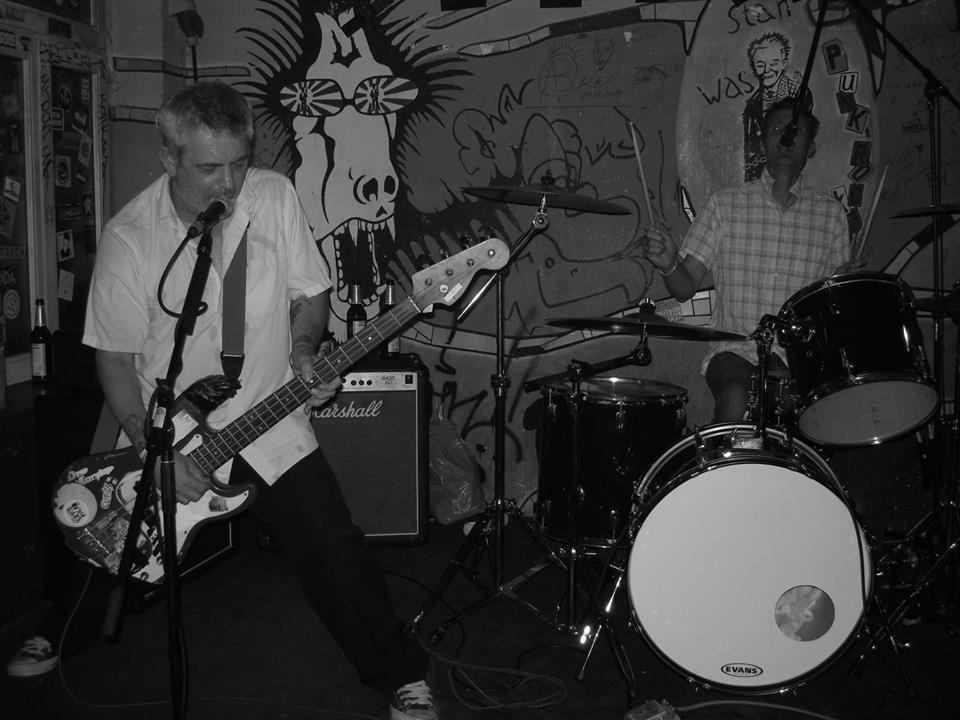 As we last saw 2 Sick Monkeys in Rhyl it was somewhat of a pleasant surprise to have blagged on this support in the middle of Europe last minute after seeing their dates on this part of their whole year of farewell shows. 20 years+ in existence but feeling like they need a rest now, they are going out strong despite Pete wishing a heart attack on himself. Genius drums and bass two-piece, groove driven hardcore, openly acknowledging their NoMeansNo homage, I’m sad that we’ve lost the pair of these inventive bands in the same year, but have memories to savour. Including a brand new song rolled out for the first time tonight, the apt “Before I Die“. A great sweaty party for the evening 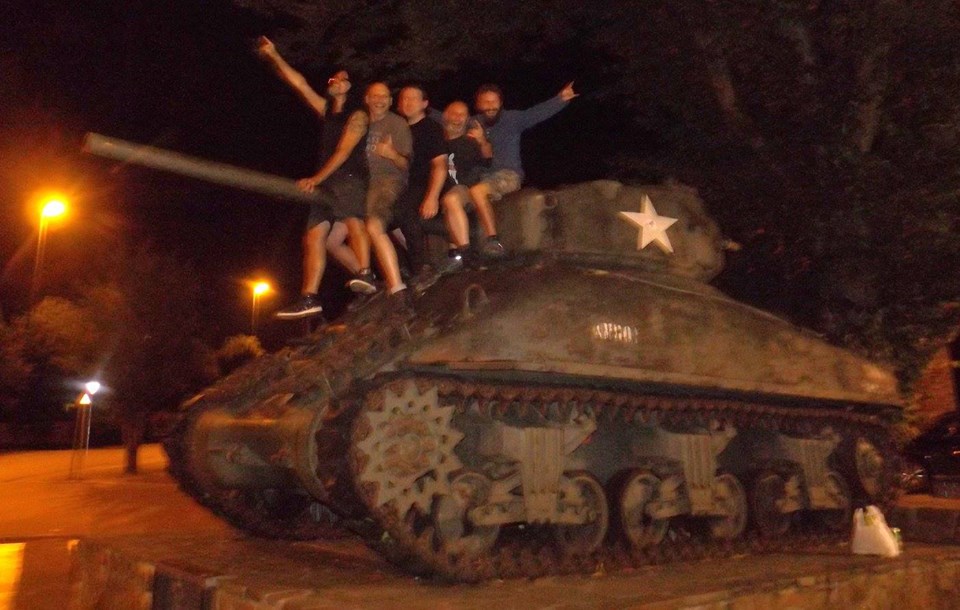 We leave and drive overnight, with a half formed plan to head back towards Antwerp and try to blag our way on to the Wake/Backslider gig there the next night, but close crash shaves on the motorway, a distinct lack of sleep by the time we end up at a lay-by in Holland, and running on various fumes in general lead us to reassess. Instead we conserve energy for the last stretch and return to the Calais coast in preparation for our return to the UK the next day. This time we do find a good bar/café/tobacconists/betting shop in scenic Gravelines and have a good wind down / close out before camping again. The last trip the next day gets us back to the North West extremes in largely one piece and we can deem the whole thing a success. Survived, 5 gigs in 3 days, pleased people, paid, seen sights, sampled local produce, new friends, further opportunities for the future. What’s not to like about Europe?