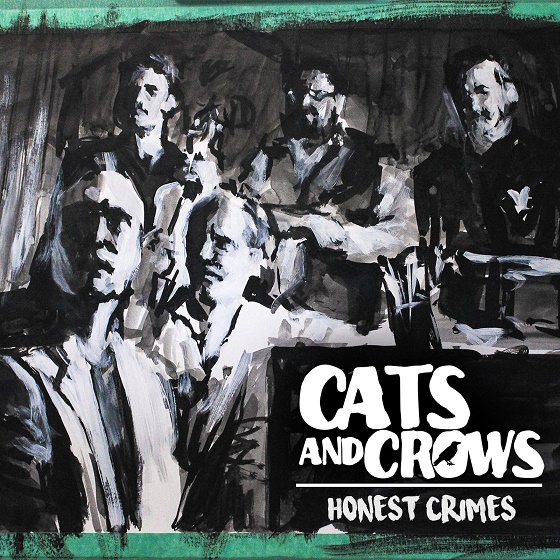 When I was contacted by Isaac Birchall, he said he had something for me. His band Isaac And The Beekeepers already have ‘Where We Are’, an EP of repute, only released last year. Surely those guys haven’t come out with another very impressive release? I thought.
Turns out, this was something else entirely.

What he presented me with was something far removed from his first band. Hello Cats And Crows, it’s a pleasure to meet you. This is a true project, a combination of craftsmen brought together to build something remarkable. For Cats and Crows, Isaac brought in his Beekeeping buddies: drummer Andy Cooper, and bassist Dave Lloyd. Rounding up the core group of musicians is Xander Croft on the strings, who adds this subtle and delicate air to proceedings. Joining them as guest artists on the six tracks that make up the ‘Honest Crimes’ EP are Joseph Leo, Zoe McCallion, Tim Nicholls and Chris Birchall.

Let’s delve in and see what we think, shall we?
I must admit, with so many members of Isaac and the Beekeepers appearing on this EP, I believed the music would be a carbon copy of that band, or at least have that same kind of feel to it. I couldn’t have been more wrong. Cats And Crows is a delicate band: soulful and sensitive like a summer sunset, with a tincture of melancholy and late-night revelations added to the mix. This is music which summons up forgotten seasons and misty memories.

Of the six tracks, ‘Honest Crimes (Love and Hope)’ is an ocean of a song: huge, with massive depth and hidden power, it’s over 8 minutes of audio joy, punctuated with an almost bittersweet repeating of ‘every little thing’s gonna be alright’ washing over you at the end. The most surprising track on this EP goes, hands down, to the cover of Nirvana’s ‘Territorial Pissings.’ If you’ve heard the original, you’d probably be baffled as to how anyone could successfully convert this rampant grunge mauler into a mellow, subdued acoustic number. But Cats And Crows did it, ladies and gentlemen. They did it damn well, too, if I may say so.

‘Honest Crimes’ hits a home run with each of its six tracks. From start to finish, it feels well-crafted, honest, and heartfelt. I’ve no doubt in my mind that every musician showcased here put their all into making something that they could be proud of. And, yes, they can indeed be proud of what they’ve accomplished here. Cats And Crows deserve your attention. Best give it to them.