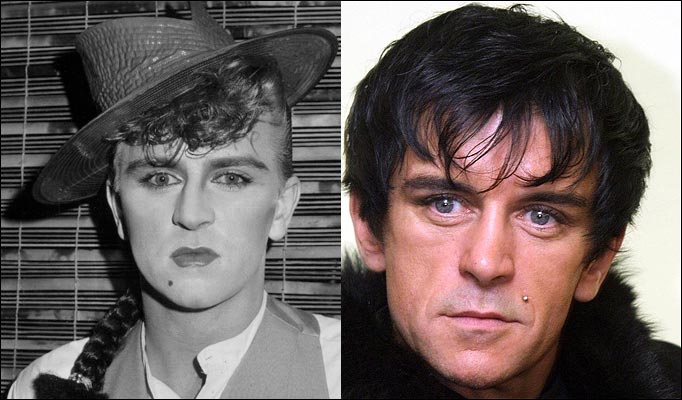 Steve Harrington (28.5.59 – 12.02.15) born in Newbridge, Monmouth, former frontman of Visage, brought up in Kinmel Bay & was in the same infants class as local promoter Steve Rastin & ex-Cellophane Boys’ Simon Shaw in Towyn CP – he is remembered standing in the playground yelling along to a bright orange plastic Beatles guitar he was hammering at.
He & Rastin hung out together as 7 year-olds (c1967) but it all ended in fisticuffs & tears. Apparently he went on to attend Emrys ap Iwan school in Abergele but got kicked out for dyeing his hair purple, at which point he moved down to London, became an occasional skivvy at Sex / Seditionaries before reinventing club culture in 1979 & forming Visage & having 8 hits incl the huge Fade To Grey.
Circa 2003 Steve was living with his sister in Fishguard recovering from assorted addictions & bankruptcy. He admitted he faced drug addiction problems in the years that followed his early success.
A new Visage album, called Hearts and Knives was recorded in May 2013, with the band boasting a new line-up. They also recorded a new classical interpretation of Fade To Grey last year.
In the intervening years, he had become a sought-after commentator on pop culture, appearing on a number of TV shows recalling the New Romantic era.
In a nod to his involvement in the Ashes to Ashes single, he appeared as himself in the BBC One police drama of the same name.

He also made a series of memorable appearances in BBC3 reality show Celebrity Scissorhands, winning the first series in 2007 and returning the following year as an “image consultant”.

His death was sadly announced on 12.02.15 in hospital in Sharm el-Sheikh, Egypt

(info below thanks to Phil Newall)
Steve Strange is believed to have been a member of the now legendary/mythical group The Moors Murderers. The group is thought to have been a concept of top wanker Malcolm McLaren and Vivien Westwood, which Strange progressed with the aid of Sue Catwoman. Other alleged members thought to have included Chissy Hynde (Pretenders), Vince Ely, and The Kid (Adam & The Ants). Due to the somewhat controversial name of the group most ex members virtually deny all knowledge, making out that it never existed, or that it was a elaborate hoax just to dupe the press etc. Allegedly tape bootlegs were doing the rounds in 1978, being distributed by Sounds journalist Jane Suck. The group are also rumoured to have played one gig, as support to the Slits, though this is extremely doubtful.

I have a listing of the only release, a single ‘Free Myra Hindley’ on Pop Corn Records, this is allegedly a limited edition of a few hundred and came out in May 1978. I have never seen a copy or ever met anyone who claims to own one, let alone heard it. Record Collector state that it doesn’t exist and that if it did it would be worth a fortune! Though it would be a very brave/stupid shop that displayed that in its window!! As to where the demo tapes went is anyone’s guess.

[Other sources state Soo Catwoman was involved in the band, as was Mark Ryan (Adam & The Ants) & Vince Ely (Psychedelic Furs).]
This band never managed to play a gig, but did achieve an unsurpassed notoriety by recording a single for Jet Records called “FREE MOIRA HINDLEY” one of Britain’s notorious Moors murder child killers, still in prison to this day. The record was banned before it was ever released, and the band appeared in The Sun Newspaper all wearing black plastic garbage bags over their heads. The British nation was appalled, Punk’s were the scourge of society at that time. Even with bags over their heads Steve and Tex were somehow recognized on Oxford street and beaten up very badly by members of the public.