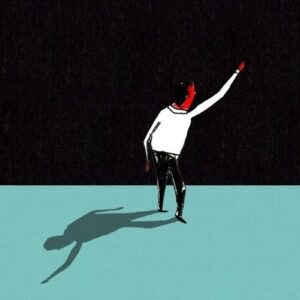 Tawnily scrawled in my notebook…
‘Birds Above Parades is almost Julian Lennon! And yet still good in a boiling milk  kind of way…!’

Three years in exile within that open prison called Mold, Mechanical Owl‘s parole officers, DrumWithOurHands Records release him on February 21st.
By sheer coincidence, his album, Winter Songs comes out on that very day and it’s a very apt title as I cling onto the heat my laptop gives me!
The world of music (well, my world at least) is dripping with quality bands running off on psychedelic tangents and I love every minute of it, high as a kite, gliding on sound thermals.
Mechanical Owl isn’t one of those bands, and yet I am still listening, consuming, gorging on this alluring pop music of many angles. This is a cosine in a triangle of love – simply pop? Maybe… pop-indie? Inextricable pop?  But not just ‘another collection of songs’ – this album is full of crevices, nooks and crannies to keep you from a life with no light and eternal rings around your eyes. The track, Catapult perhaps does veer off down a welcome highway of colour, cutting into the limestone to deliver a sparkle of delight, and there are plenty of bands doing this stuff and long may they continue to, but Mechanical Owl can dip their claw into those psychedelic pools and fly back to Popland.

There’s a Mercury revving up amongst all this, thankfully without that awful Jonathan Donahue sickly vocal sound, instead, we have the talents and vocals of Mike Payne – instantly recognisable as being half of Half Avian (quarter-bird?) well, it is for me, having discovered this brave new world backwards, when Mechanical Owl has been fluttering around for a good few years, and Half Avian making up the downtime.

The attention to detail is absolutely phenomenal – Mike could have so easily taken the lazy twat ‘My-songs-are-brilliant-and-don’t-I-know-it’ route, slapped on a shitty drum machine and strummed out his stuff onto tape.
Yes the songs are brilliant, but he adds that semi-crying voice, the subtle hook, and MOST IMPORTANTLY an absolutely fanfuckingtastic production. I sit here between my speakers (world’s biggest headphones) and I’m lost within the sound, that attention to detail, reverb – not for reverb’s sake, but because it’s used with precision. Every single sound has a purpose… Leaving you sonically drunk, and despite being told you’re better off sober, I’m going to drink Winter Songs again and get totally smashed.

Out on Feb 21st on CD and Bandcamp – on DrumWithOurHands – Mechanical Owl is 100% proof.