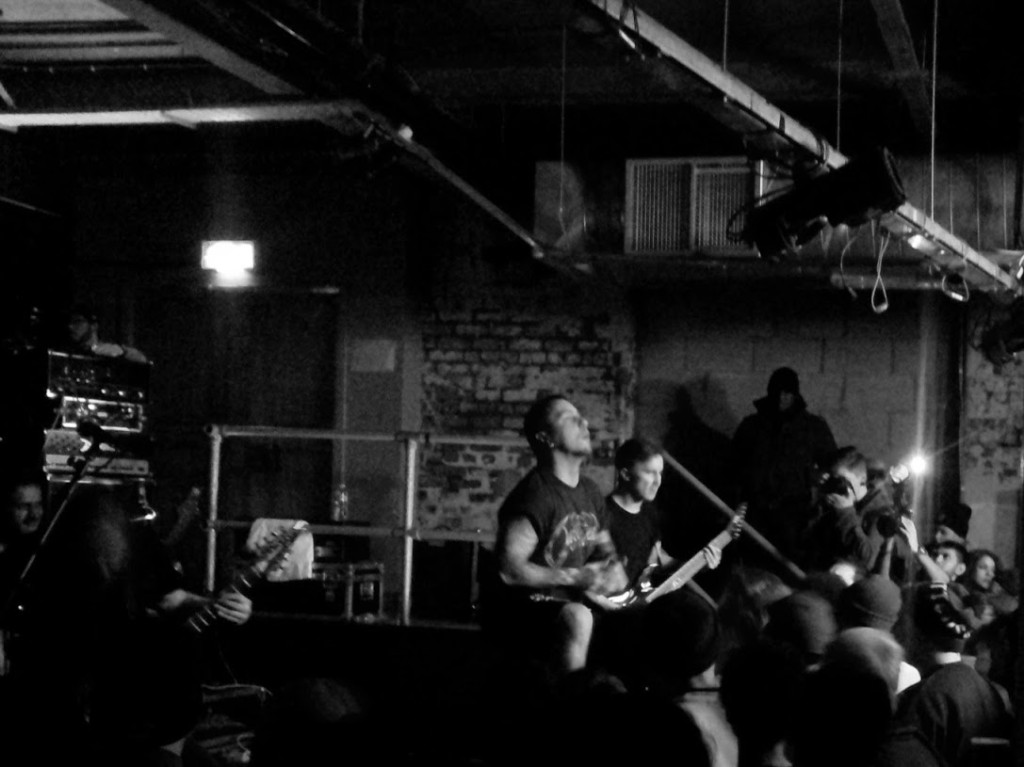 Gwion, that old Braxton Hickster text me to say he had spare ticket for this gig and that I needed to brush up on my Death Metal…
He also added the bonus of being chaperoned to the grimy city by Catherine and Carl in their deceptively big on the inside Tardis-like Ford Ka. 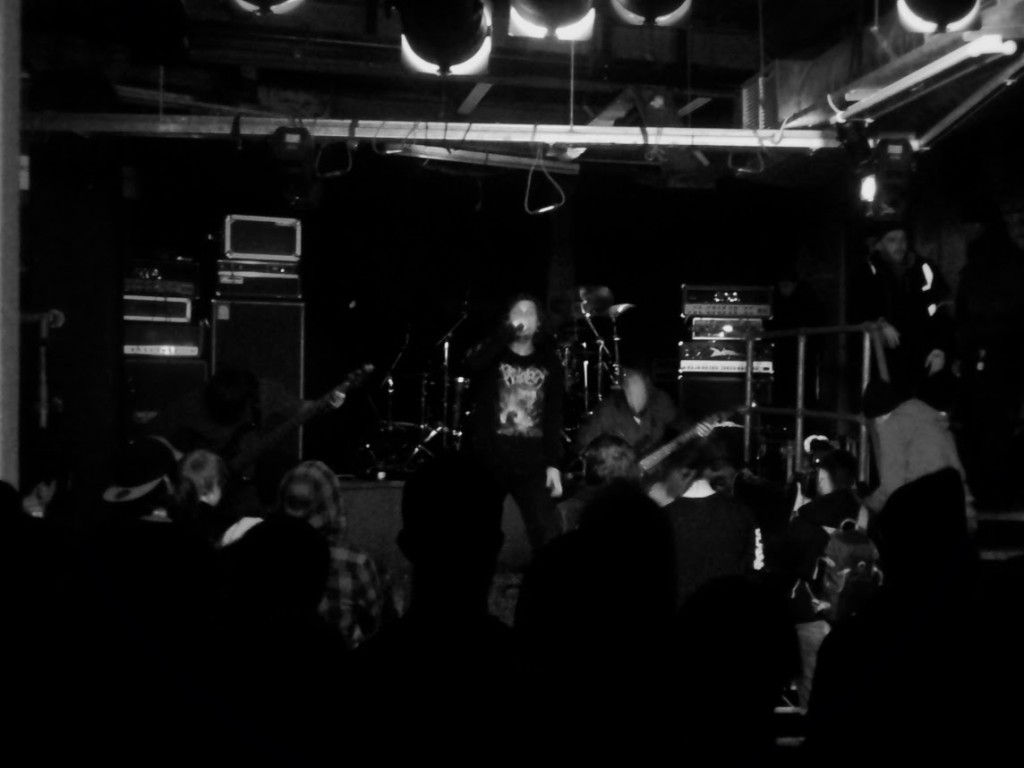 I could hear Indiana band Aegaeon Reshaping the Multiverse with their darkened sound as we made our way down the filthy sticky steps toward the rumble below. We entered a rammed room that is only let down by the pillars in the way of a clear view. It’s only 7.40pm and you can’t move inside this sold out show, paying homage to the support acts, who can quite often end up playing to a few disinterested early birds.
We only caught the final three songs by Aegaeon; it was guttural, loud and vicious, with melodies crammed tightly amongst those 1000 mph riffs – just what the quack prescribed; metal drugs for everyone.
Here… Have a listen… 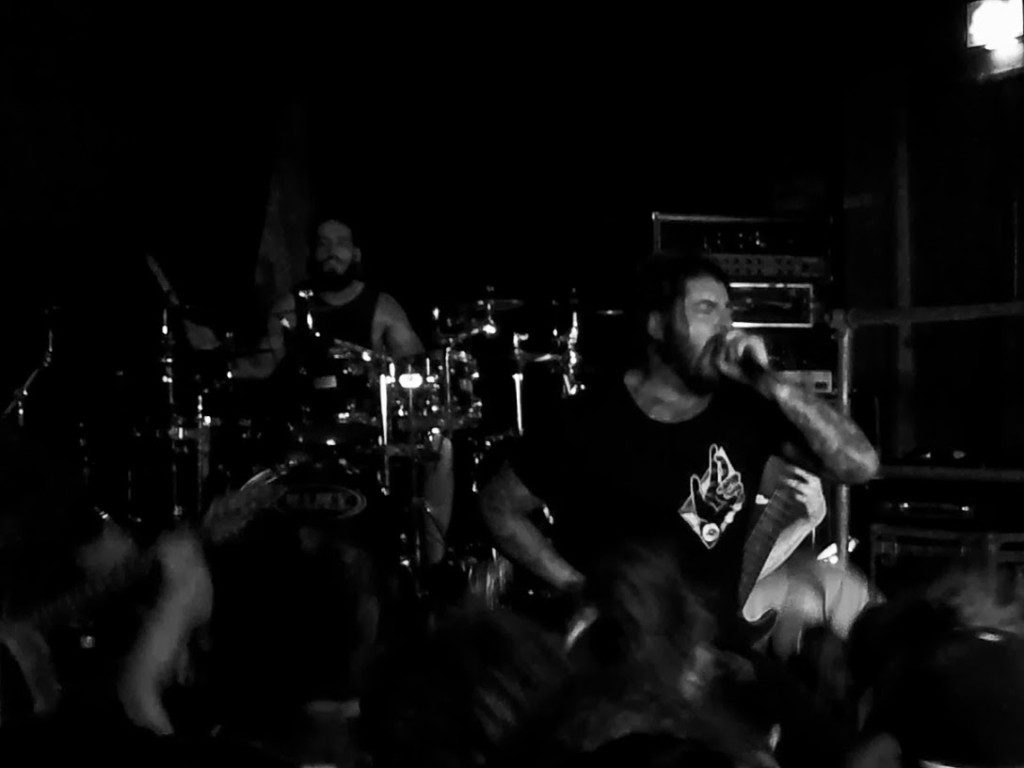 Aversions Crown are up next after a swift changeover. It’s break-beat hell on earth saddled by three guitarists, a bassist and vocalist… I think there were 29 guitar strings onstage (flash gets!) but all you hear was that unrepentant double bass drum and vocals. So for all the flash guitar work, particularly from the guy who looked like he skipped college to be here, they may as well have been playing chainsaws.
Despite the sound, the kids in the crowd lapped up every little bit, giving the band the clichéd fucking noise as demanded by the Colin at the front.
Hailing from Brisbane it must’ve cost them a fucking fortune to ferry six band members over from Australia!
Check ’em out here…

Amid the smell of stale beer and BO, there was a hamster cage whiff about the place, which can only mean one thing… well, two things… They’ve either got a load of hamsters backstage for ritual servitude or there’s a rat infestation… Nice.,, Kinda adds to the whole seedy feel of the place… 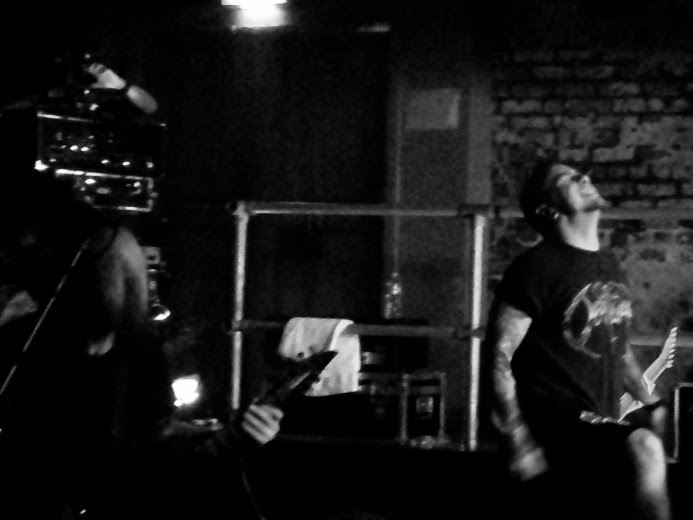 Stepping up a gear, enter the UK’s representatives on this tour, Heart of A Coward, having never heard of any of the bands tonight, both Gwion and Elephant Al said good things about them prior to their set.
Confidence oozed from every pore with a capital C from vocalist Jamie Graham, almost with an air of (justified) arrogance.
Great riffage and not so fast that it turns into a mish-mash. No, this is blistering, great dynamics, great breaks and really furious – a top top performance.
The whole room is bouncing aplomb to Noise, and Shame has an almost punk ram-raid style riff to it with shades of a fast Destroya by Twisted Fucking Sister.
‘This is social networking… Coming to gigs, not clicking Like on facebook,’ Damn fucking right it is…
There’s plenty of chanting and ranting going on and Deadweight (a crowd favourite) is dedicated to ‘the pricks out there’ (pointing to chav city outside). Recommended and I look forward to catching them again soon.
Website 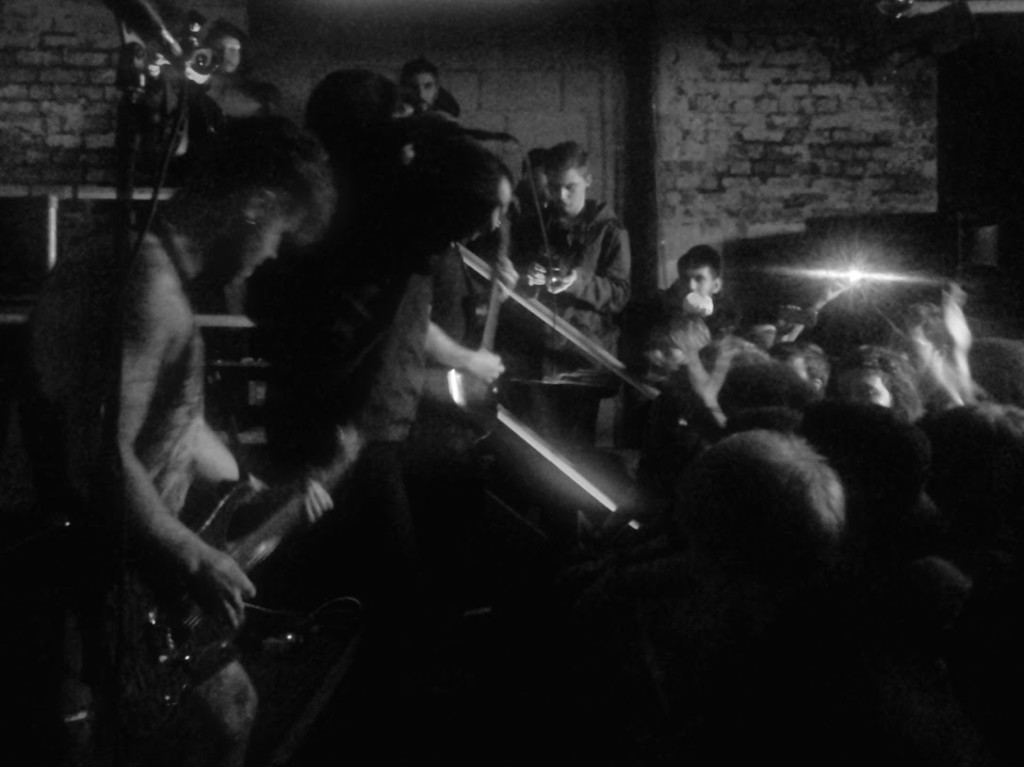 Thy Art is Murder are Aussies on tour with a point to prove and a reputation to live up to… And there is no messin’ around, no pussyfooting their way onto the stage – straight for the kill.
Frontman CJ McMahon is zipped up in a hooded anorak, to later reveal a Man City shirt… He looks like a fat Frank Gallagher and is equally shameless. He is a show man and at peace with his self turmoil and ripped throat… Happy to goad the football fans of this city and suggest a wall of death – ‘City fans to the left, United fans to the right – let the battle commence…’ The crowd go berserk… Brilliant to watch, just glad I saw it safely tucked away to dodge flying limbs, teeth and other body parts.
The set was relentless.. Insane drumming… This, their third UK show of the tour and the third sell out… It was the extreme end of extreme and full on entertainment and the kids (who were stage diving responsibly) loved every second of it…. Me too, or as Gwion put it…
‘It was fucking great…!’
Look!