Greenman 2014, a cloud in a bottle & the 9 hour airbed.
Review By Jared Pegler 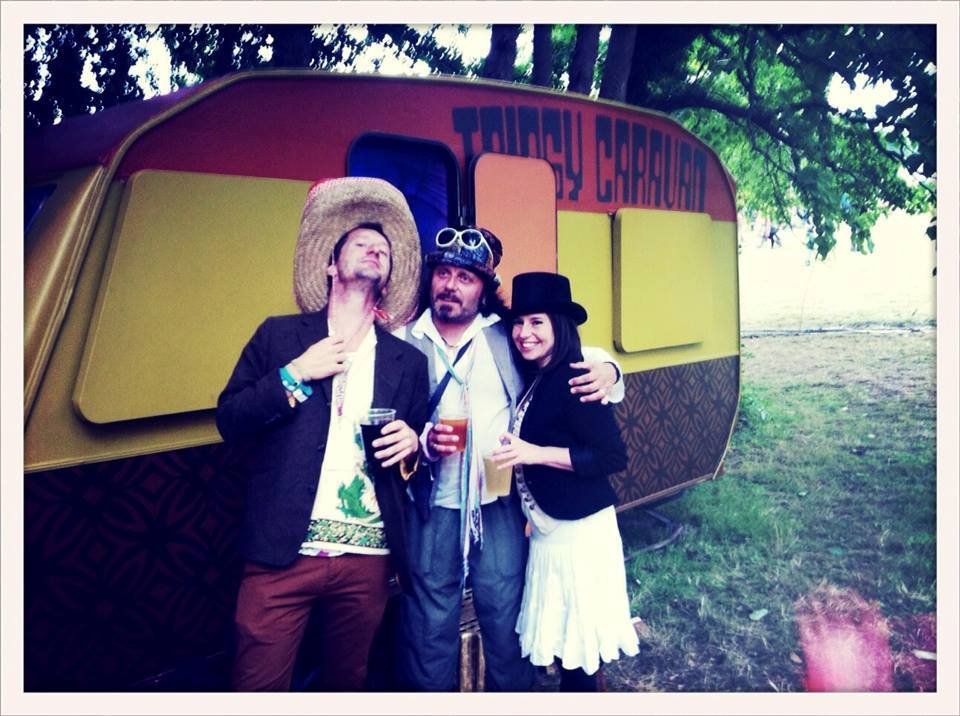 I was lucky enough to receive a call from an old Llangoed mate a few weeks ago – Gez Hughes. He asked if I wanted a ‘freebie in’ for the Greenman, well who was I to refuse!
He did explain that it may involve a certain amount of ‘crewing’ at his event/stall type thing, so after a few seconds of thought, I agreed!
I hadn’t been to GM since about 2008, I’d stopped going after 3 years because the weather always seemed to be dire down Brecon way at the end of August! Once Gez had explained the type of ‘work’ involved, ie. crewing on The Tripsy Caravan, I was off to the cellar to retrieve the coolers and camping equipment! 🙂
Soon the trusty Toyota was packed, and at 5.15am on the Friday, myself and travelling companion Hari (Gez’s sister) were on the road!
Arriving at 10ish we were ushered into park rather conveniently close to the crew camping, crew canteen, crew showers & crew toilets and commenced to build camp. Gez had been there for 3 days already, having completed his first festival appearance the week
before – Boomtown! So was already full of that festival feeling for sure! We looked like the real camping deal! (In fact, rather like an advert in the Aldi magazine!). 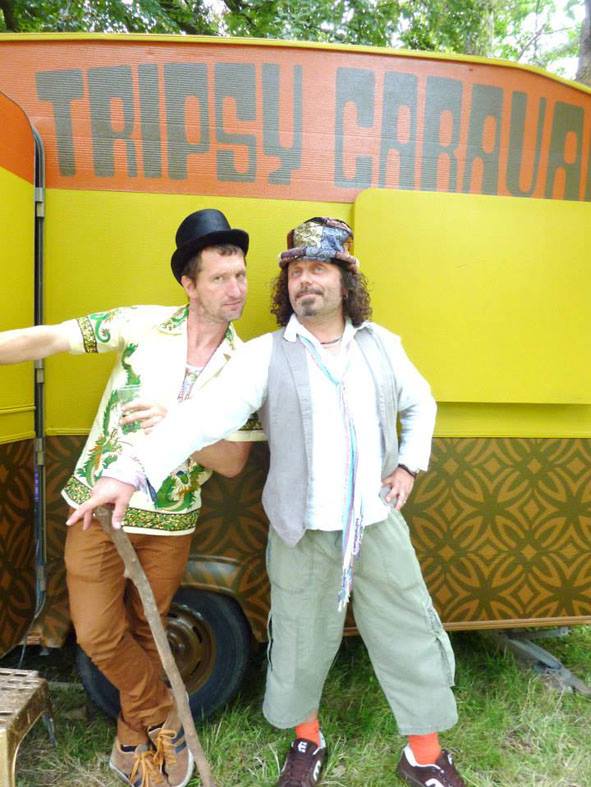 After some (free) brekkie, Gez took The Tripsy Team down to the site to see Tripsy. He had been working on his baby for several months, but the results were spectacular – A 70’s colour scheme outside on what was once a 3 or 4 berth touring caravan, and inside was a wonderful chill-out zone / film set / chic boutique area reminiscent of Barbarella, Blade Runner, the Korova milk bar and with a heavy dose of C R Mackintosh styling. The whole unit was lit from inside the shell, creating atmospheric moody-changing lighting that made the inside of Tripsy pulsate! From the minute we plugged her in and opened the door, the lovely Greenman punters couldn’t wait to come in for a chill and a chat! It was beautiful!

With plenty of stages to choose from: Mountain Stage, Far Out Tent, Chai Wallahs & Greenman Rising; Lots of opportunities for entertainment: Talking Shop featuring discussions with musical/literature slebs, Cinedrome cinema tent played varied films, Full-on fairground, The Last Laugh comedy tent, science and activities tents (where Gez procured an experiment to create a cloud in a bottle… and let it go!) There was a great area of the younger adult / teens called Somewhere, which was like a mini GM with open mic areas, chill out zones and games areas so the younger generation didnt have to hang with their older un-cool parents (result!). Gez and I partook in some ‘lightpainting’ here! Not forgetting the countless World food stalls serving a variety of great food (Goan fish curry
being a hit with our crew!) I was worried about the fact that I was ‘working’ that weekend, and how our ‘scheduling’ to see bands would work out between three of us, but you know what, it was just great being based at Tripsy and having the festival-goers come to us! Plus we were right by the Green Man Rising Stage which had enough entertainment on this stage alone throughout the weekend!

Organization of GM2014 was superb! Everything seemed to flow, oh and the weather was fantastic which always helps! It is always a great atmosphere and I was glad to get my Greenman floppy top hat back out of retirement ; ) The other great thing about The Greenman is the people of course! Old friends from all corners… North & South Wales, Brighton, MCR, Bristol, Preston to mention a few corners. And there are of course the new friends we have made this year – see you all soon I hope : )
Here are the highlights of bands I managed to see that weekend however… (In no particular order!)
Charlie Howl • Beirut • Augustines • Jonathan Wilson • Tunng • Georgia Ruth • Phantom Band • Toy • Caribou • Instructions • Zachary Cale • 9Bach • Speedy Ortiz • First Aid Kit • Memory Clinic • Eva Bowan • Gareth Bonello • Kurt Vile • The Drop • Boy & Bear • Syd kemp • Nick Mulvey • Threatmantics • Sen Segur • Sweet Benfica • Mercury Rev.
Good to see that festival pimps Adam Walton and Bethan Elfyn out and about too!

I saw some I really wanted to see, some I didn’t expect to see, and some I thought I’d never see again! There were a couple of acts I would’ve liked to see but THAT’S for next year I hope! All were quality acts, and not forgetting the dance tents which semed to be
open 24 hours this year – yikes! (eg. Dental Disco)!!
Roving reporter Dewi Llwyd Evans had the opportunity to interview Martin Hoyland of 9Bach, and suggested the Tripsy Caravan as a location! This is something that Gez ideally wants to develop, and is considering a bigger Tripsy Vehicle for next year, with bar facilities, gig area, and rooftop garden for stargazing late at night! So watch this space!! Being crew of the Tripsy, we did of course push the boat out and have an excellent on-board after-party one night! In fact people were at the door queuing up to come in!! But only the best were invited – Dewi Llwyd, Rich Lord, Gaz Penmon, Gez Maesteg & Loz, Ella, Lynsey, (these are just some friends I remember being
there – names and times may have changed!).