Now it’s getting serious… It’s gonna get messy, I’ve got a one way ticket ’til Sunday and my drinking buddy with me… This is where I rely less on my notebook and more on my wits… Let the party begin…
There’s one thing missing from a ‘town festival’ and that’s mud… So, to live that real festival experience why not book onto a sodden camp-site and put your tent up in the pissin’ rain?

Focus Wales is now three days old and in full swing… It’s Friday night and every little thing is gonna be all right… Tim Griff and myself head to The Commercial to see Rhyl exiles, Gintis, who have been playing in Wrexham for nearly all of their 12 year existence.
Despite having seen them at least 18 times, that eighteenth time was almost seven years ago!
The band have become more of a collective since the release of their second album ‘Idiot Guides And Plans’ – taking long hiatuses while they concentrate on other equally successful projects (Wobbly Hearts, Secretaire, Mexican Walking Fish, Telefair), making a Gintis gig a very rare occurrence these days.
So when I learn they’ve been on the piss all day my heart sank… I thought, ‘Oh dear’ and their abortive Radio Wales live broadcast of 2003 came flooding back… With seasoned drinking however, comes experience and there was nothing to worry about, they pulled it off with guile and zest…
A new (very topical) song opened the set; ‘Please don’t take away the Sun Centre, We’ve already lost the fair to the supermarket.’ – Inspired lyrics against a background of melody and friendly chords, depicting the plight of Rhyl at the hands of a council intent on butchering what little life is left there.
Wonderful Show has not faded over the years, and Tim (a Gintis virgin and metal-head by trade) was taken aback – here, try it yourself for size. And that final song… Wow… There wasn’t a dry eye in the house… Now I Know played live has a real emotion to it… A real tear jerker… ‘Please don’t die, because I love you alive.’
Alan Holmes (Ectogram, Fflaps) has deliberately avoided ever listening to Gintis on account of their over-enthusiastic teenage self-promotion back in 2001. Alan, there’s a huge void in your life… Trust me on this one.

With things having overrun slightly, we dashed up to Un Deg Un to catch Mr Phormula, already firing on all cylinders alongside Dybl-L. As I said in my review of his first-rate new album ‘Cymud’ – it took me an age to actually get Welsh hip-hop. Oh I certainly get it now… right in the chops… It was a chest thumping performance, full of spit, sawdust and all the gears.

We trot along to Central Station and learn that Japanese Gun have pulled out. This gave Chester’s Obelisks a late opportunity to join in the fun. They came across as a typical rock band but with little funky licks and sometimes poppy edge to their offerings. Very good confident stage presence and a cracking last song.

I know it’s not big and not grown up, but the beer was in full flow by now, as were the bands… There’s no let up as Mowbird immediately take to the main stage at Central and kick in with their distinctive sound… but there’s something missing… The crowd… The band’s body language said it all really; they seemed disappointed that every fucker was watching either Euros Childs at The Church or Kids In Glass Houses at 3B – and I’d say this occasional (and I guess unavoidable) clash was one of the very few oversights by the Focus organisers.
The beauty of Mowbird is you can see 10 songs in 15 minutes as nearly every one ends as if half way through (this is deliberate). Their ‘Islander’ album recently received a 10/10 review from Louder Than War. I smiled like a happy active horse organ…

Talking of Louder Than War, we meet up with that media mogul, John Robb and his erstwhile companion in Saith Seren. They, like ourselves are revelling in the quality of what is on show, and it doesn’t stop with South Wales’ Prosperina (see main pic) who are throttling the living daylights out of this fine little venue with their no nonsense approach and full throb material. Check out their Plan 9 Channel7-esq video here. 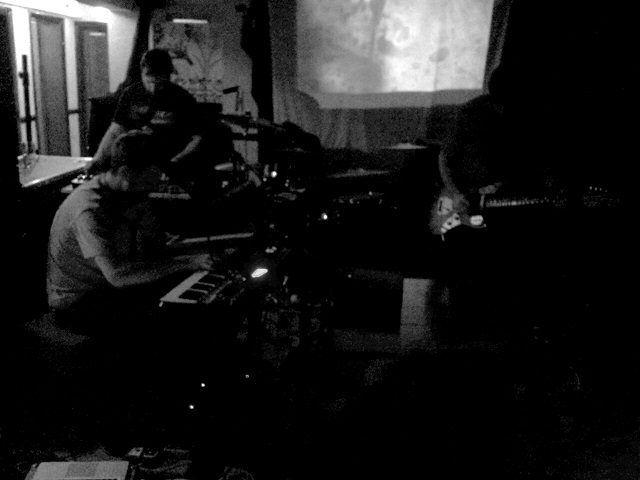 Prosperina were an added bonus, like finding a pound on the pavement. We came here to see Baron La Croix – like the faithful heading to the toiling bell, we followed the buzz, amid an air of anticipation. Of course, for myself and those being blessed by Damo Suzuki last night we were here armed with good knowledge of what to expect, for Baron were Damo’s impro-backing band for that one night.
For me, seeing them in that form twelve hours ago did dampen tonight’s performance a tad… I naively expected more of the same sans Suzuki, whereas Baron La Croix have more of an electronic experimental edge about them. Like Ummagumma being produced by Mike Oldfield.
You’re waiting for it all to explode, implode, unplode, replode or any plode, but it doesn’t quite do it. Notwithstanding, it’s still very very good, coupled with space cake psychedelics on the big screen adding to a lost-in-the-circuitry-of-a-positronic vibe. 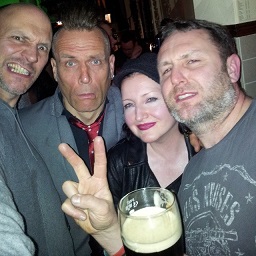 We stop by at The Bank to catch Finnish folk choir Kardemimmit absolutely smashing it. This only cements my love for such an event… In the sad and real world you walk into a bar, and if by chance there is a live band on, Ladbrokes will give you odds-on that they are some Guns n Roses tribute toss or covers mercenaries committing crimes against music. So to chance upon four girls from Finland with voices sweeter than sugar can only be a blessing from above.. Thank you Lord Focus… 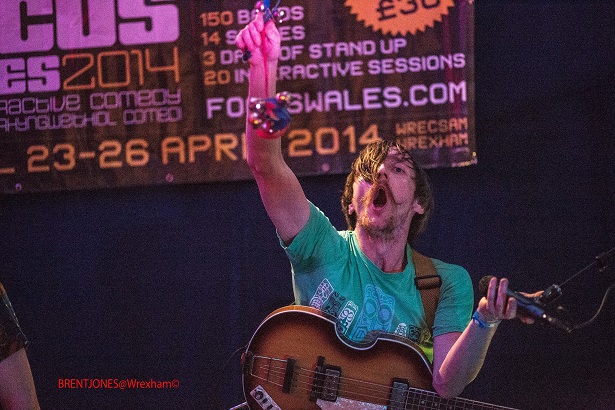 The pic above is of Islet, taken by Brent Jones – check his ace pics. There’s a couple of photos of myself doing the rounds via social media in various states of disrepair. Oh yes… but the one of me crouched against the PA looking shedded gives the wrong impression… I was simply in total awe watching Islet (ok… and very drunk).
Seeing them in the flesh now adds sense and understanding to their cracked-up and capricious albums – they are fucking lunatics.
They are Syd Barrett on cornflakes, they are the Acid Queen behind bars, they are pinball wizards surfing on coke dunes, they are the holes in your Swiss cheese.
You’ll talk about them for hours and say nothing, they are that bewildered pensioner towing a caravan the wrong way along the A55, they are the Samaritan telling you to Jump, they bring darkness to your light and at the same time light up your dull lives…
Ladies and gentlemen… I give you Islet… You’d better believe it… 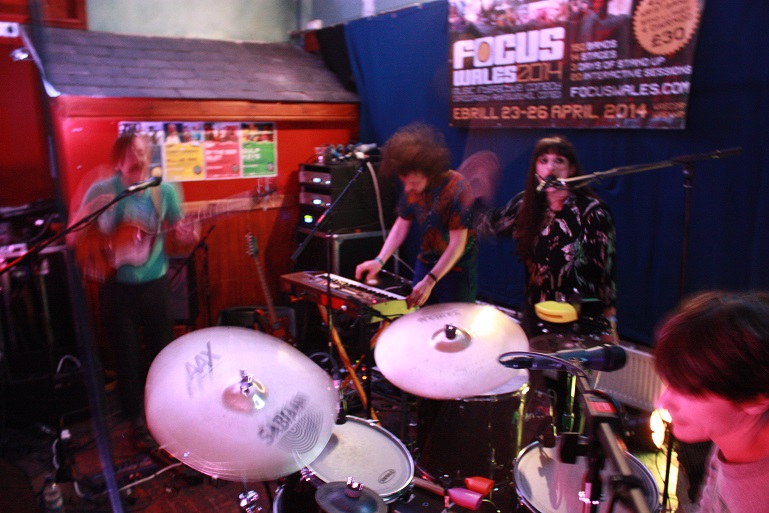