It began as an all day architectural visit in Chester to study the interiors of all the public houses in the city 😉 – It ended by being sick in a car park in Liverpool…
Seventeen of us were going to pay our respects to the God of Carling. I then noticed Dead Sound had a gig on in the pool, and to be so close, it would be silly of us not to pop in to say hello.

Then, some complete and utter arse at British Rail, or Virgin Trains or Arriva (they’re all money grubbing twats anyway), decided it’d be a good idea to close the line between Rhyl and Chester for the weekend. Seventeen became Four as myself, Tim, Gwion and Michael journeyed in our four wheeled train direct to Liverpool.
After telling the lady in O’Briens to ‘Fuck off’ when she asked for £50 deposit (EACH) to stay in her shit pit of a hotel we decided to ‘take our chances’ on the streets and hit the pubs to take in the afternoon’s football on TV and general buzz of the city.
Like the Robocop film franchise; one became two, two became three, three became four as the Guinness, 1664 and Carlings steadily flowed… Yes… I know it’s not big and it’s not grown up, despite the fact we are very big, if not at all grown up.

Maguires wasn’t busy… no… it was fucking packed to the rafters. Gwion spat, and I quote; ‘Why can’t we have fucking ace gigs like this in Bangor?’
Why indeed? It’s down, I guess to population, and whereas Bangor has a huge student contingent, they are these days, as a protagonist of trolldom recently said, ‘Students are only interested in pills and shagging.’ So a punk rock gig, or any gig featuring original music wouldn’t even bleep on their radar, particularly if it was Malaysian (topical satire there kids!). 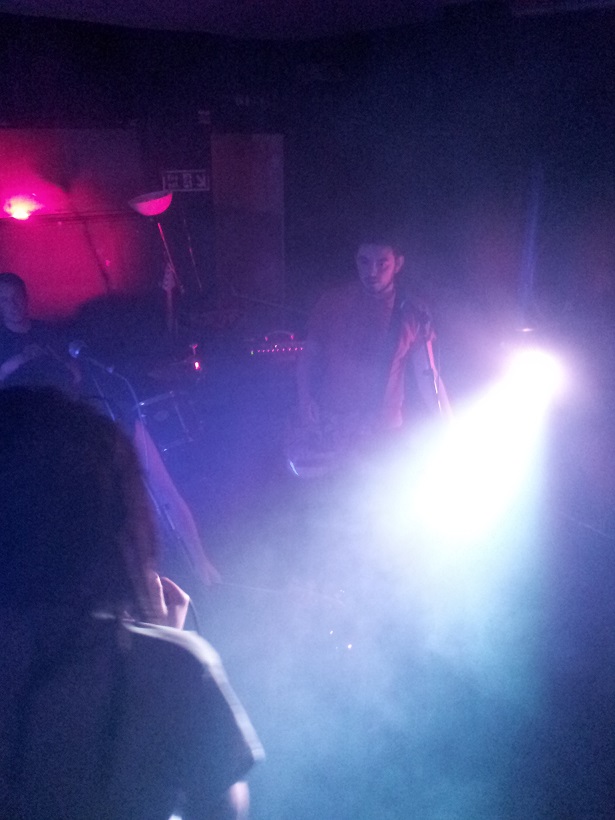 We missed an acoustic set by local scumbags The Stopouts as we battled to get toward the live room as hoards of filthy crusty punks fought each other for deep crusty pizza. Y’see, Maguires is a pizza house – imagine those corporate stinking slags Dominos doing something as subvert as hosting a punk gig on their premises! Yeah, they’d probably put those pricks Razorlight on and think they’re being down wiv da kids…
So, with salivation from pizza vapours and alcohol induced euphoria, it was up to another bunch of local bombed-out-non-church-going ska’d up punks Old Radio (pic above) to kick off the full electric proceedings with their political Cameron hating anger. It was loud and clear, and we skanked, pogoed, stood, watched, cheered, drank and leered. It was all good fun.
They have a new album Consume And Keep Smiling – a subject close to my angry black heart – Check it out here

The band finish and there’s an exodus for fresh air as we spill onto Renshaw Street for a breather; some stopping for more pizza toppings on their way out / in (hold the anchovies!)…. Next up, making their scouse debut are Manchester’s Holiday – shit name – great band. It’s fun fun fun in the fluffy chair, flame up the herb, wolf down the beer. Holiday are a Ramonic old-punk style with something to say, it’s pop punk on Red Bull –
‘The Olympics enjoying it, you’re having fun, There’s missiles on the roof in central London.’
What a great set – at least I think it was as that damn alcohol was running away with me by now, but I must’ve enjoyed it immensely as I forgot to grab a pic of the band…
Have a Holiday on Bandcamp More pizza (ten inch liver and pineapple anybody?) and more punk rock in the shape of Liberation (all this for £4..!! Incredible). I’m writing this hoping I don’t get shot down in flame-grilles for getting the running order wrong, but hey what the fuck – Had a fucking top night…
Liberation were almost a reverse of Old Radio, in such that they were more ska-punk than Old Radio’s punk-ska. This made their punk bits all the more powerful as they’d rip up their songs, as we tore up the dancefloor and then fell on the band (pic below).
Liberate your strings here you puppets…

If I can muster the braincells I destroyed tonight into a rudimentary memory process, I think I thought Liberation were actually Autonomads (below & main pic) and was quite prepared to head into the big bad city. Unfortunately, this is exactly what Tim and Michael thought too, and amid the pepperoni and extra garlic melee our skank unit was broken up, with the aforementioned two lobbing into scouseland. 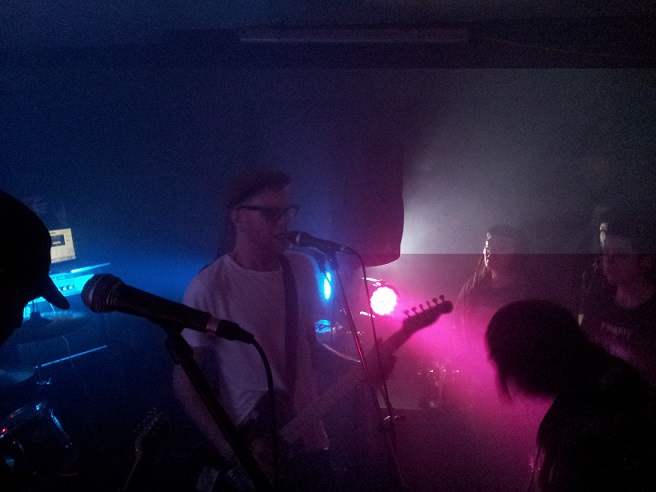 Gwion and myself turned heel and headed back indoors to be greeted by Autonomads – who, despite seeing 5 years earlier at The Dudley in Rhyl (see review), felt all new to me – ‘Elizabeth is our benefit cheating Queen.’ (Ace) – it sounded new, it sounded fresh, it sounded like anarcho dub punk from Manchester. A spot on set, the band were bouncing, we were bouncing, place was bouncing… Fucking great night….
Bounce this way…

My car (although very nice) isn’t the perfect place to spend the night – but Slater Street car park was as romantic a night I could offer poor Gwion (heh heh..!)