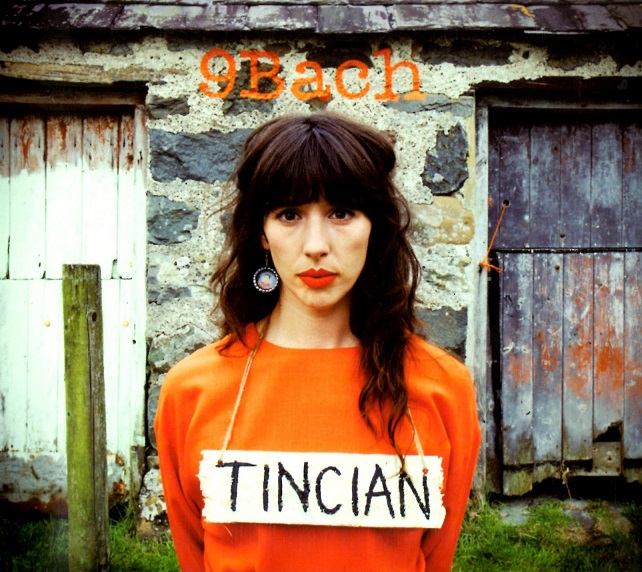 9Bach have a new album out, ‘Tincian’ on Real World, and this is a short tour of Wales to promote that album.
It is a rare thing these days for the ‘support’ DJ to be mentioned in dispatches but DJ Fflyffilyfbybl (Byd Mawr) provides the vibes. He manages the impossible and vibes up the bar at Galeri. Many are outside on Doc Victoria enjoying the sunshine but I witness at least two people coming up to Dewi to compliment him on his sounds (that’s pretty good) and by 7.30pm the bar is heaving, overflowing and grooving to the reggae sounds of Geraint Jarman and later on to the worldy sound of ‘Week of Pines’.
Support band Plu are young and a family affair from Caernarfon. Proof if proof is needed that Welsh folk music or traditional music is undergoing a surge in activity and interest. They do a great job of warming up the audience and are both natural and endearing in their approach. They display a real interest, knowledge and indeed passion for the music that they are mining and delivering. Interestingly they cover a track off Welsh Rare Beat (compilation by Andy Votel, a Manc, telling us how good our Welsh music catalogue is).
Plu’s real strength tho’ is the subject matter and honesty of song writing. We are told several times that the lead singer can only write from real life experience and that she has been inspired by Welsh Landscape such as the Mignaint above Penmachno and swimming in the river Dwyfor in Cwm Pennant. This is not radical stuff in one sense, but does display a healthy attitude and it was certainly one of the highlights of the evening to hear that the Welsh landscape is being used to create new Welsh folk music.
Plu create and write their own stuff, therefore the folk tracks are moving on up. This is no purist covers band.

9Bach come on to an intro track and images of quarrymen. This feels like a proper gig and indeed this is a band which is now unafraid to display confidence. From the start and throughout, 9Bach establish themselves without doubt as the leaders of the (Welsh folk) pack. The deal with Real World must have given them a boost – and it now means that there is some chance of the records being heard.
Somebody earlier on mentioned their recent Guardian review and I do wonder if the sell-out attendance has something to do with this ? The Welsh do love to be told that a band is good by the Guardian or as the Welsh language media have been calling Real World – Peter Gabriel. We only realise how good it is when somebody like Andy Votel comes along and tells us (remember Cool Cymru ?). Maybe, but who cares – this is a good gig for 9Bach and it’s a great attendance for Galeri.
The audience is a who’s who and the great and the good of the Welsh media / literati / twiterati etc but then 9Bach have hung in there for a long long time – this is DESERVED !
9Bach display touches of brilliance within an hour long set which is consistently good. Occasionally, such as with the Greek song, you get the feeling that a bit of editing or musical directorship would give them that final polish but this is without doubt a confident band on their way up.
Lisa Jane not only looks brilliant in orange but she really does have a natural and funny charm, the “English is my second language” routine is probably true, it’s also really funny and almost political. We have had two really interesting ladies on stage tonight. Welsh ladies with attitude, but not one that has been forced out or contrived. This again is very positive – the ladies are far more radical.
We get the hits. ‘Yr Eneth Gath ei Gwrthod’ still stands out as a pop hit. Lisa mentiones the Hinterland trails that used one of their tracks. Again, cool – it gets Welsh music out there.
Musically this is Welsh folk, and some trad, sat on a deep, deep bass. God that bass rumbled, just like King Tubby – brilliant. The visuals and Welsh quilts / quarrymen reminded us that this band is from Bethesda – that great tradition form Maffia Mr Huws to Gruff Rhys – and again I think this is really positive – sense of place – shout it out. Streic Fawr Penrhyn gets a mention.

They DO NOT do encores. Lisa makes this clear. But, they do get a standing ovation. Lisa also tells us that she has been told that there are CDs on sale in the foyer. Of course there are – this is the way it is these days. But, alongside some brilliant music, Lisa has to be complimented here for giving it an attitude, not a folk-swagger by any means – but she is without doubt a star and that is something Welsh folk really does need if it is to take things out to the masses.
I wish them well on the journey.
Tincian is out now on Real World Records.