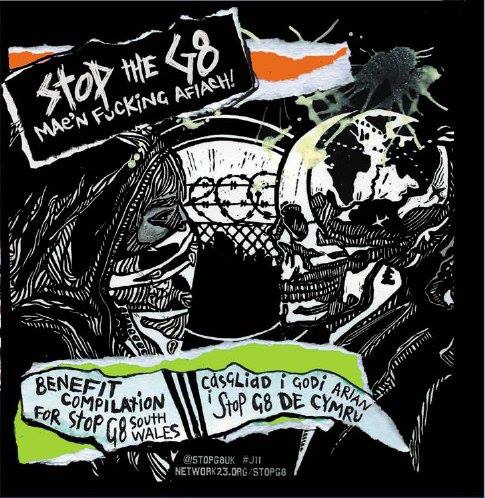 I also love protest material, sadly this is very thin on the ground these days – everything is nice and safe… No one slags anything off, no one complains about a poor release… The NME is little more than a shit fanzine, scared of upsetting the record labels / bands who are the main source of their advertising revenue. Put it this way, if I had a label / band that was absolutely slated by the NME then I’d think hard about spending hundreds of spondoolies advertising my next release / gig with them.
Gone are the days when journos (the wankers!) were some of the most hated people on the planet, Steven Wells (fuck, I hated him!), Simon Reynolds, Johnny Cigarettes, John Robb, Simon Price, Julie Burchill etc etc… They didn’t mince their words if they didn’t like something. It didn’t matter that much to the band or label as they were getting publicity, and quite often a really shit review would provoke a backlash and provide that band or label with even more column inches, and as long as they were talking about you, then you were in the public eye.
These days EVERY FUCKER has an opinion and the ability to hide behind a typewriter and dare you say something against their band then you’re fucked by a hate campaign. I believe Simon Price got a bit of stick a few weeks ago and he asked the question whether proper critical journalism was really dead and if there was any point in being a critic.
I suffered and suffer the same kind of shit, to the extent of being physically threatened for being too honest about some bands… The truth quite often hurts… But there again, are Simon’s or my own words the truth? No, it’s just an opinion, one person’s opinion. Yes, that writer’s opinion may well be trusted, regarded, respected or hated, but it’s usually read by many for exactly those reasons. And if the trolls (usually a band member and their girlfriend/boyfriend) were so high and fucking mighty then why the fuck don’t they write reviews themselves or set up their own website?
If you’re not told where you’re going wrong then you’ll forever blissfully play the local pub circuit and watch your audience dwindle – you ignorant cunts.
I have long simply written about bands I like rather than be negative, but sometimes the blood will boil or I’ll see something, or someone I know is better than what they’re actually doing and feel compelled to write about it; to tell them I think they’re heading in the wrong direction, or that they’re simply shit. But again, it’s only my opinion – does it count? Well, it seems to when I’m full of praise…

Back to the compilation album, Stop The G8 – Mae’n Fucking Afiach! – it’s playing away in the background as I write, so I guess it’s caused a reaction already after the above rant! I’m guessing it’s been put together by the anarchistic Crav and Efa, who have Bonnie and Clyded their to way to South Wales, taken hostages and barricaded themselves in Cardiff and are going to shoot at all forms of authority – fuck yeah!

Their values are held in esteem – nothing is for financial gain, all profits go to those who need to benefit from it. As a token and appreciation of this goodwill, 23 artists have contributed to this ace, eclectic and colourful protest compilation album. From the brilliant to the downright fucking awful… In this case it doesn’t matter how fucking awful some of the contributors to this piece of Bullshit Detector are as this is a benefit compilation for Stop G8 South Wales group, and the blurb says, ’23 songs, all kinds of genres; drum’n’bass, punk, hip hop, acoustic, experimental… with the same anger against the government.’
Featuring –  Class Actions, Radio Rhydd, KilnAboy, Jamey P, Wowzer, The Parliamentalist, Abergaz, Lost Soul, Son Capson, 51st State, Rufus Mufasa, Gab De La Vega, Ceffylau Lliwgar, Tacsi, Tracey Curtis, Odlgymix, Cosmo, Braxton Hicks, Mwstard, Ammon, The Smashrooms, Little Eris and Grand Collapse.