Clowns to the left of me, Wytches to the right.
(review by kyle gintis) 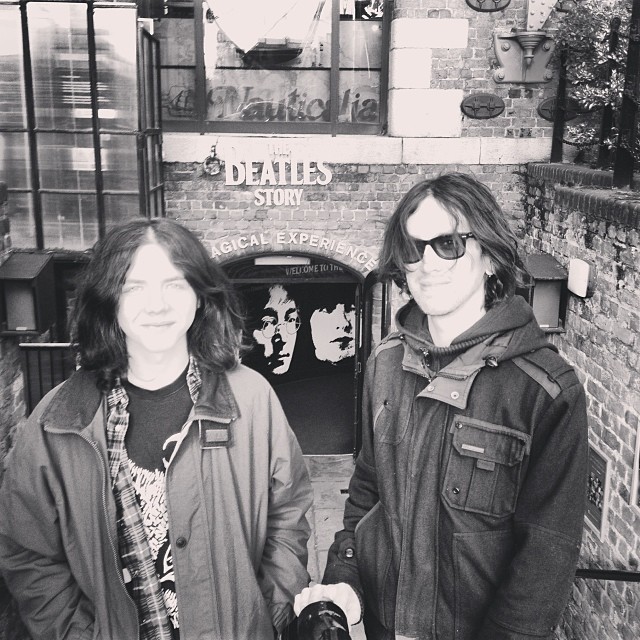 It’s been a long time since I’ve paid the full ticket price of a gig purely to watch the support act. There is nothing wrong with Future Of The Left, I don’t really own any of their stuff, but tonight I’m not here to watch them. At 20:15 I’m going to watch The Wytches for my first time ever and I can’t fucking wait. A band I know little about apart from the fact that they have really cool videos on youtube and that they are in the middle of finishing off their debut album that is being produced by none other than Bill Ryder Jones (ex Coral guitarist).

The problem with watching a band for the first time after hearing their singles is you’re not sure if they are going to sound anything like the recordings. Well, Wytches do, and that’s a 12 point start in my book. Opening with Digsaw I haven’t felt this excited about a band since Carpet graced my ears 10 years ago in The New Inn, Rhyl (and made them bleed). The opening bars of feedback and over the top reverb are about to unleash their surf-doom guitar and bass tuned to DEAD on this very unsuspecting East Village audience of Liverpool.
The band look young. Too young to sound like they do, and I think this is their first national tour, but you know what, it doesn’t matter because they look like they’ve done it one hundred times before. Their sound is something new and scary but I’ve also heard it one hundred times before. Just like their Brighton uglier and older brothers Eighties Matchbox B-Line Disaster, and Manchester’s Nine Black Alps, I’ll listen to this band one hundred times and if I’m lucky I’ll see them a few times too, because the record labels are fighting over this band and rightly fucking so!
Not a word is mentioned in between songs apart from “Hi we are The Wytches”. Isn’t that all we need to know? The songs are loud, the bass is heavy and most of them under 3.5 minutes. And the best thing is although they have a hard hitting driving drummer, although they have a tall heavy handed bassist and although their guitarist has long hair and seems as fragile as the windows that are about to shatter. They sound fuck all like Nirvana and don’t you dare compare them to each other.
After speaking to the drummer post set and asking him who they will be releasing their album with I was pleased to hear “Not too sure, we’re letting the record companies fight it out”. There will be an album next year and we all have faith in Bill Ryder Jones as he has proved himself as a producer on a few things now notably By The Sea’s debut last year. But the fact the band aren’t arsed and just want to make their noise is another 12 points from me. Note to record companies: Don’t fuck this one up, as you seem to do that very fucking well.
Gig over, time to get another pint I think. Oh shit, there’s another band to come isn’t there. Hang on a minute, is that Danny Dyer?