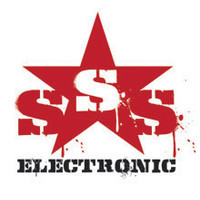 Also, just released by Hammond is a collaboration with Bangor based author Joe Shooman. The track (which is not credited to any particular artist) is called Zombie Dub.